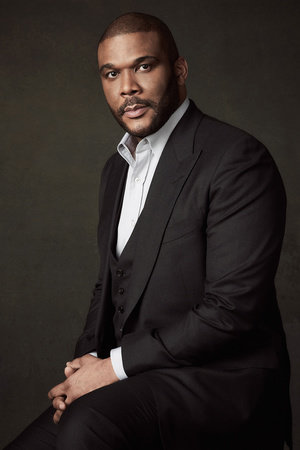 Tyler Perry is the mastermind behind nineteen theatrically released feature films, more than fifteen stage plays, nine television shows, and a New York Times bestselling book. His creative empire has won over audiences and built communities from the Tyler Perry Studios home base in Atlanta, Georgia, throughout the world. His unique blend of spiritual hope and down-home humor continues to shape his inspiring life story, connecting with fans across the globe and always leaving space to dream.

Don’t Make a Black Woman Take Off Her Earrings

Where did the idea for Madea come from? Is she based on real individuals?

Several years ago I saw Martin Lawrence in Big Momma’s House and Eddie Murphy in The Klumps, the sequel to The Nutty Professor. At the time I was doing an old-man character and decided I wanted to do an elderly female character as well. That’s where the idea was born. I based Madea on my mother and my aunt. In fact Madea is the PG version of my mother and my aunt. Their real ratings would be NC-17.

What’s the void that Madea fills in the African-American community? Why has she struck such a chord with so many people?

When I was growing up, and for generations before, you could find Madea on every corner in every neighborhood. She used to be everywhere. Now she’s close to being extinct. Grandmothers today are much younger and great-grandmothers are in their early forties. We’ve all heard the saying, “It takes a village to raise a child.” Well, to be a Madea you have to be past sixty and the head of the village—the neighborhood—that raises the child. She’s the grandmother everybody can relate to. Almost everybody knows a Madea. You know someone like this woman. If you don’t, I feel sorry for you. She is the protector of all things family, of all things good.

How has Madea evolved over the years since you first created her?

She has become wiser. As I go through life lessons, they’re transferred onto her. She has also become a little gentler in her approach.

How did you come up with DON’T MAKE A BLACK WOMAN TAKE OFF HER EARRINGS as the title of this book?

If a black woman gets upset, the first thing she does when she’s about to freak out completely is take off her earrings. I thought it was such a perfect gesture . . .the best weapon of defense. If you see that happen, watch out—you know you’re in trouble.

When did you first connect with the Madea in you?

I don’t know if I’ve ever connected with the Madea in me. I don’t know if there is one. The connection is more one of realizing I could play this character and, if anything, imitate my mother and my aunt. Madea is not from me; she just comes through me. She uses my body.

How has Madea changed you?

A lot of times, in the course of an ad-lib some great wisdom will fall out and I’ll say “Wow, where did that come from?” I’ll hear Madea say things and think, “That makes a lot of sense, I should apply it to my life.”

Madea takes a particularly strong stance against hip hop lyrics that use terms like “bitch,” “ho,” and “nigger”; against girls who are promiscuous and who get pregnant when they’re too young; and against abusive partners. She recognizes that parents occasionally need to “whop that ass” when it comes to their kids, and she has absolutely no patience for those who criticize kids in the hood for “acting white” when they do well in school, speak proper English, and get good jobs. Of the various issues that Madea raises, is there any one you consider most important?

They are all important — they all have a profound effect for how they register in society. It’s hard to say that any one is “most important.” As for Madea though, the most important would probably involve what children are listening to in hop hop music and seeing on television. It’s essential to show more positive images of who we are, and the negative images may be one of Madea’s biggest pet peeves.

Do you think Madea is having an impact as far as her stand on these issues is concerned?

I do. I get tons of positive feedback on my message board from people who have seen Madea and heard what she has to say, and who feel that their lives have been changed for the better as a result. One woman wrote about finally getting out of an abusive relationship thanks to Madea; another wrote about not knowing what her kids were listening to and then having more of a clue after hearing something I had said in a play. Messages like these let me know that what I’m doing—what Madea is saying— is having an impact.

What do you think will most surprise readers of this book?

Madea’s frankness, her uncanny ability to say whatever’s on her mind. She’s not politically correct, and that may shock some people.

Dave Chappelle was on Oprah recently, talking about his sudden disappearance last year and the pressures that came with the staggering success he had achieved: having to deal with hangers-on; everyone wanting a piece of him; outside agendas being forced on him; and so on. In the past, you were homeless, sleeping in your car, at times broke and starving. Now you live in a multi million-dollar mansion and poverty is far behind. Has it been difficult to adjust to your phenomenal success?

There have been some difficulties, but I’ve never had to deal with people wanting a piece of me or pulling me in different directions. At every step toward the “success” I’m now experiencing, I’ve done things in my own way and on my own terms. There wasn’t anyone saying “Do this” or “Stand there.” I’ve never been able to function in a world like that. One of the key difficulties has involved adjusting to negativity. With everything you do, and everything you say, there’s always someone spouting a negative opinion. I’ve had to learn to rise above reacting to that.

Needless to say, there’s a stereotype in the entertainment world of the performer who scores brilliant success with a character but then grows resentful toward that character because of the problems breaking away from it. Are you saying you’re worried about being typecast?

There’s no resentment. I’m grateful for this character and every day I’ve spent with her. The only person who can lead me in this situation is me. I haven’t been typecast, because I’ve defined my own trail here.

What has been the most hardest part as you’ve defined that trail?

I wouldn’t say there’s been any great degree of difficulty as much as a whole lot of appreciation I know if I hadn’t done it my way I’d be miserable. I’d be at the place that Dave Chappelle was describing to Oprah. Because I did it my own way, and made my own terms, and defined the things I wanted to do from day one, it has been a very pleasant journey for me.

What do you want readers to get out of this book?

I’d love for the book to provoke thought. There are pearls of wisdom here that people can apply to their own lives. If that happens then every agonizing moment of working on the book will have been worth it. I use the word “agonizing” because I was in the writing two scripts and on tour with Madea Goes to Jail when I wrote this book. It was a real challenge.

You’ve conquered many a medium with Madea—movies, stage shows, DVDs, and so on. Where do you see her in the next five years?

I need to let people know that I am not Madea. I have some other projects to work on that don’t involve her. There are many other stories in me that are waiting to be told. Madea is thinking about taking a little break.