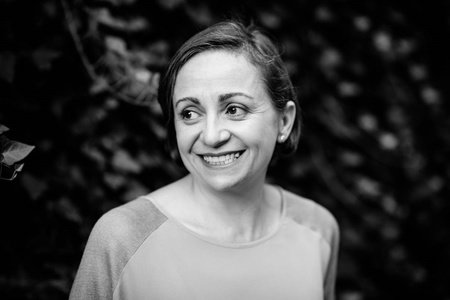 Rajia Hassib was born and raised in Egypt and moved to the United States when she was twenty-three. Her first novel, In the Language of Miracles, was a New York Times Editors’ Choice and received an honorable mention from the Arab American Book Awards. She holds an MA in Creative Writing from Marshall University, and she has written for The New York Times Book Review and The New Yorker online. She lives in West Virginia with her husband and two children.

PENGUIN RANDOM HOUSE: What inspired you to write In the Language of Miracles, a novel about a family torn by tragedy?

RAJIA HASSIB: I came to the United States a few years before the September 11 terrorist attacks, and for years afterward I struggled with the shame and guilt of knowing that my religion was used to justify such a barbaric act. I longed for Muslims to do something to show the world that our religion was not the violent one that extremists suggest it is, but not until the Ground Zero mosque controversy of 2010 did I realize just how impossibly complex any attempt at redemption was. Becoming preoccupied with the idea of a public act of apology for a crime one has not committed, I decided to create a microcosm for the September 11 attacks and use that to examine what it feels like to be an American Muslim post 9/11. From there came the idea of a novel about a family whose oldest son commits a crime and leaves his parents and siblings burdened with the consequences. Tackling the issue this way seemed ideal: It freed me from having to address the political aspects of 9/11 and let me instead focus on its aftermath on a personal level, which was the subject matter I wanted to explore. It also allowed me to investigate various other themes that I was interested in, such as gender expectations, family dynamics, the challenges of immigration, and cultural conditioning, to name a few.

PRH: Samir, the patriarch of the family, has a great deal of pride that frequently causes friction with the American society he is matriculated into and his own family. How did your experience immigrating to America affect your perception or particular way of interacting in society?

RH: I immigrated to the United States when I was twenty-three, which meant I was old enough to have absorbed Egyptian social norms but young enough to still have the flexibility required to acquire new modes of behavior. I also had the added advantage of having had a Western education and of growing up in a westernized family, so the transition to living in the U.S. was much smoother for me than it would have been for Samir. Still, change is never easy, and I still had trouble adapting to American frankness, for instance, a social trait that I have come to admire and value but that initially clashed with what I was used to. For example, certain rules of politeness in Egypt dictate that one cannot accept help or any invitation from another person on the first time the offer is made. It is customary for people to make certain offers (“Why don’t you come on over for tea?”) out of politeness, and it is customary to decline that offer the first time it is made. If the person truly does want you over for tea, he or she will offer again, and again, will insist, will swear that it is the one thing that would make him or her the happiest — and only then should one accept the invitation. In the U.S., such behavior would be seen as absurd. But I still have trouble accepting anything I’m offered the first time around. My instinct is always to decline, just in case the person is making that offer out of politeness only.

On the other hand, my experience has allowed me to view both the American and Egyptian societies in ways that I would not have been able to see, had I not immigrated to the U.S. Distance deepens one’s perspective, and my distance from Egypt has enabled me to be a bit more critical of the social flaws of my beloved country of birth than I would have been, had I stayed there. Similarly, my integration into American society, smooth as it has been, has also allowed me to view it with the lens of an outsider coming in, not one who was born and raised here. That, too, has been helpful in shaping how I view society and interact in it.

PRH: Do you see a disparity in how people perceive mental illness in the United States and Egypt?

RH: Yes, I do. Unfortunately, mental illness is much more stigmatized in Egypt than it is in the United States. Egyptian society in general still views it as a source of shame, something that one has to hide from friends and neighbors lest they think less of us for it. That, of course, creates several problems, the most prominent of them being that treatment of the mentally ill is often delayed or neglected. Another problem is that lack of an open, educated discussion of mental illness leads to ignorance: People are more likely to miss signs of mental illness because the topic is not discussed often enough. Added to that is the complexity that religion brings into the subject. In a highly religious society such as the Egyptian one, suicide, for example, is seen first and foremost as a sin, not as the tragic result of, say, severe depression. Even depression can be denounced because of religion, since people’s first reaction is usually to assume that the depressed is simply ungrateful to God for all His blessings.

Thankfully, that attitude is starting to change. Seeking the help of a psychiatrist, for instance, would have been unheard of a few decades ago (the assumption being that psychiatrists are only for “crazy people,”), but is now becoming more and more common. So the hope is that Egyptian social attitudes toward mental illness will eventually evolve enough to allow for a more rapid identification of illness and, by extension, for an easier path toward offering help to those who need it.

PRH: Why did you choose Khaled’s love of insects to demonstrate his struggle with identity as a first-generation Egyptian-American?

RH: Believe it or not, that particular choice was the result of my admiration for Vladimir Nabokov. I’ve always been fascinated by Nabokov — such a brilliant writer who was not a native English speaker! His mere existence gave me hope. I had read that he often included butterflies in his fiction as a symbol of metamorphosis, so I decided to include butterflies in my novel as a tribute to him. I thought that giving Khaled an interest in entomology would be excellent — it sets him out as someone who is passionate about the things he likes, and who is not particularly bothered by being a bit nerdy and not fitting in — a trait that would eventually help him adjust to the community’s rejection of him. Once I started researching butterflies, I came upon the Monarchs and their amazing migration habits, which fit my novel’s theme perfectly. So my tribute to Nabokov ended up providing me with a wonderful system of symbols that I then happily explored further.

PRH: Do you believe Khaled and Fatima’s struggles as Egyptian-Americans are easier because they are part of a younger generation, or more difficult because they are growing up in a post-9/11 world?

RH: For other Americans with a hyphenated identity, being younger should make the adjustment easier. For Egyptian-Americans like Khaled and Fatima or for Arab-Americans in general, though, I think the flexibility of youth is hardly enough to counter the challenges that come with growing up in a post-9/11 world. For one thing, anti-Muslim sentiments are obviously much more prevalent today than they were before 9/11. For younger, American-born Muslims such as Khaled and Fatima, the sting of the community’s exclusion of them has to hurt all the more because they inevitably identify as Americans before they identify as Egyptians or Arabs or whatever other ethnicity they belong to. The typical utterance of hate speech — Go Home! — hurts young people more because they have known no other home. America, whether others believe it or not, is their one and only home. Before 9/11, young Muslims didn’t have to deal with such rejection as much as they do now. While the current climate of Islamophobia is certainly hard on all American Muslims, it has to be even harder on those who truly identify as Americans first and foremost, including the young as well as those Muslims who are second-, third-, or fourth-generation Americans. It’s like being constantly rejected by your own kin. It’s not an easy burden for anyone to bear, let alone for a teenager. So I believe that Khaled and Fatima’s struggles are certainly magnified by the fact that they are growing up in a post-9/11 world.