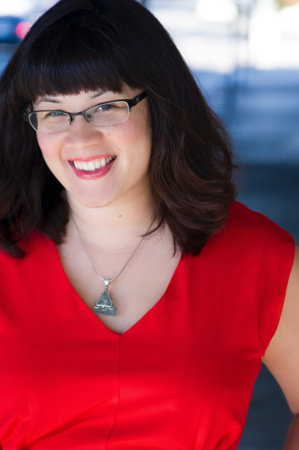 Sarah Kuhn is the author of the popular Heroine Complex novels—a series starring Asian American superheroines. The first book is a Locus bestseller, an RT Reviewers’ Choice Award nominee, and one of the Barnes & Noble Sci-Fi & Fantasy Blog’s Best Books of 2016. Her YA debut, the beloved Japan-set romantic comedy I Love You So Mochi, is a Junior Library Guild selection and a nominee for YALSA’s Best Fiction for Young Adults. Her latest novel for young adults, From Little Tokyo, With Love—a modern fairy tale featuring a half-Japanese heroine—is a Junior Library Guild Selection, one of the New York Times’ YA Books to Add to Your Reading List, a People Magazine Best Book of the Summer, a nominee for the Golden Poppy Award, and Penguin Random House’s One World, One Book title of the year. She has also penned a variety of short fiction and comics, including the critically acclaimed graphic novel Shadow of the Batgirl for DC Comics and the Star Wars audiobook original Doctor Aphra. Additionally, Sarah was a finalist for both the CAPE (Coalition of Asian Pacifics in Entertainment) New Writers Award and the Astounding Award for Best New Writer. A third generation Japanese American, she lives in Los Angeles with her husband and an overflowing closet of vintage treasures.

From Little Tokyo, with Love

Shadow of the Batgirl

Sometimes the end really isn’t the end: Heroine Complex author Sarah Kuhn tells us about about her trilogy’s surprising afterlife.

Sarah Kuhn: Yes, we’re at the end of the trilogy. Heroine’s Journey is Bea’s book. She’s the baby sister, and it felt kind of right to finish it off with her. It was originally sold as a trilogy, so I had been working on an end point, but we’re continuing it. There’s going to be a novella, and three more books, and it looks like we’re going to be spending a lot more time in this universe. With this book, I tried to end one story arc with the three main characters, but also to leave the door open for a new story arc.

PRH: Like every good comic book series, this is becoming an expanded universe.

SK: Exactly. I was thinking about what I could do to make this universe bigger without making it seem like I was resetting it. Sometimes it seems like the heroes keep fighting and fighting, but nothing actually gets better because the series has to continue. I wanted it to feel like they had these triumphs that were going to stand — we’re not going to undo those — but I’m trying to make the world a little bit bigger, so in the next book we will actually go to different locations instead of staying just in San Francisco. That way, we can make the world bigger while still feeling like they’re all moving toward something.

PRH: Superpowers and big battles aside, this is a series about family.

SK: Yes, very much so. One of my favorite themes in any creative work is that idea of the family: where it is this kind of patchwork you make up as you go along. Some of it is family members who are actually related to you, and others are friends you’ve grown so close to that they’re like your family. Sometimes that also gets a little dysfunctional, which I  explore a lot, but I’ve always liked the idea of a super-team in this big house where they all live together, and they’re a family. They are a unit that fights evil, but they are also very much bonded together by more than that.

PRH: The books are set in a real city, and there are some other elements that are quite real, as well.

SK: That’s right! In the third book there is a bookstore which I based on all of my favorite bookstores: Mysterious Galaxy in San Diego, Borderlands in San Francisco, the bookstore in the book has a cafe like in Borderlands, and most importantly, the Ripped Bodice, which is an all-romance bookstore in Culver City. I think it is the only all-romance bookstore in North America. It is run by Bea and Leah Koch, who are sisters. They’re wonderful, and they love books and readers so much. They create such a wonderful community and sense of warmth. I write a lot there, and they have this wonderful pink velvet couch on which they let me sit and write all day. I felt very sheltered and protected when I was working on this book.

It was kind of fun to have this place in which I was writing all day also be a setting in the book. They also have a very famous dog. His name is Fitzwilliam Waffles: a tiny, rescued longhair chihuahua. He has his own Instagram, and is very famous. He has his own line of merchandise at the store. I knew I wanted to have a bookstore dog in the book because I love when stores have their own pets that are lurking around. I based the dog character on him. The dog is named Pancake, like waffles, to stick with the breakfast food theme.

I was talking with the cover artist, Jason Chan, who does all of the cover art and is super amazing. He asked if there were any elements in the story that were different before. I told him about the dog. I checked in with Bea and Leah, and asked if it was okay if the dog looked exactly like Fitz. It is like putting a real person on the cover. They were so excited, and wanted it to look like him. So many people have commented on that. On Goodreads, a user asked if the dog on the cover was Fitzwilliam Waffles. Someone else said that it was and that he was doing a “signing” at the story to launch the book. We actually did have him “sign” some copies with his paw. That was fun.

PRH: Bea is finding her place. I imagine that is difficult for any sibling, especially when you have an older one who has gotten his or her share of the limelight. Do you have siblings of your own? How did you explore this dynamic in the context of not just having a talented sibling, but one with superpowers?

SK: Yes, I have a younger brother. We’re very close. I love exploring different kinds of relationships and connections in these books. A sister relationship was definitely one that I wanted to get into. I consider most of my very close female friends to be sisters. I drew from that, as well.

With Bea, I felt that she had a tough go of it. Her mother died when she was young, her dad left, and she’s been raised by an older sister who doesn’t really know what she’s doing. Bea keeps getting put into these situations where she feels like a bit of an afterthought; an add-on to everyone. Her big sister is a superhero with a best friend who has a huge personality that takes up space. There’s always a demon thing happening.

I know that some of her need for attention and validation and love, especially in the first book where it is Evie’s point of view, came off as her just being a pesky little sister. I wanted to dig into why she felt that way; all of her vulnerabilities and the places where she hurts. That was really interesting to do, and I enjoyed being in her head because she’s so different from the other two. They are classic over-thinkers: They overanalyze everything and are always in their heads. Bea just reacts: She’s very impulsive, very emotional. Whatever is in front of her she just reacts to. There’s something in me where I am an over-thinker. There is something freeing in writing that.

PRH: Do superpowers exacerbate those kinds of personality clashes?

SK: Each of the powers I gave the three characters are connected to whatever their main issue is. Evie doesn’t want to be noticed or be in charge of anything. She wants to fade into the background, so of course she has this huge, showy, dangerous fire power that is completely at odds with that. She has to figure out how to get a handle on this. Aveda is tough, cool and meant to be a superhero, but her power, telekinesis, isn’t very good. She makes up for it by being a badass. Her superpower is almost secondary. Bea has the most supervillain-like power: emotional projection. She can manipulate people’s feelings. There’s something about it that is maybe a little close to mind control. If she pushed it a little further, it could take her down a bad path. Because she is so reactive, impulsive, and emotional, I thought it would be interesting to see where the line was: If someone who has this personality along with a shades-of-grey moral compass has this power, what will it take to push them into using it in a bad way? How do they come back from that? I tried to make all of these powers linked to the problems the characters had to resolve.

PRH: So what’s your next project? Do you have a title or schedule? Anything your fans might like to know?

SK: We don’t have titles yet, and I’m not sure if we’re going to continue with the heroine naming convention. I feel like that is how people know it now, but it means that I’ll have to think of other words that come after heroine. The novella will be out next July. It is about Lucy, the bodyguard and personal trainer of the main characters. People are always asking about her story. The next three books are, again, Evie, Aveda, and Bea, and those will be out every July after that. We’re staying on a July release schedule every year.