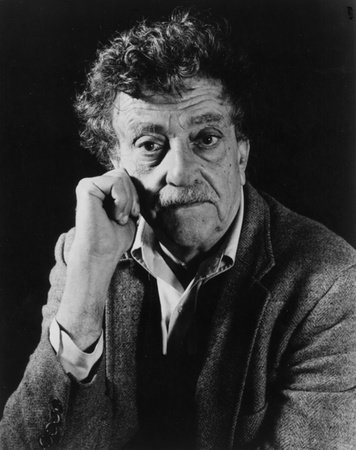 Kurt Vonnegut was a master of contemporary American literature. His black humor, satiric voice, and incomparable imagination first captured America’s attention in The Sirens of Titan in 1959 and established him, in the words of The New York Times, as “a true artist” with the publication of Cat’s Cradle in 1963. He was, as Graham Greene declared, “one of the best living American writers.” Mr. Vonnegut passed away in April 2007.

Between Time and Timbuktu

Welcome to the Monkey House: The Special Edition

If This Isn’t Nice, What Is? (Even More) Expanded Third Edition

Books by Kurt Vonnegut published by The Library of America

Your father first became enormously successful in the late 1960s, when the antiwar sentiments of Slaughterhouse-Five meshed perfectly with the anti-Vietnam War mood of the day. But he later expressed concerns that his work was no longer relevant, that nobody read him anymore. Now it seems that his sensibility is resonating once again.

His readership has always been large and loyal. Whenever he complained that no one outside of high school students read him anymore he was fluffing the balloon.

Living through the firebombing of Dresden by Allied forces in World War II was one of the central experiences of your father’s life. It was the direct inspiration for Slaughterhouse-Five, his most famous book, and it informed all of his other work. Did he talk about it within the family? Was it something you were very aware of as you grew up?

My father mumbled a lot over crumpled paper and did not tend to share his feelings with his family as I was growing up. I knew he got the crap beat out of him for standing up to the German guards and telling them they couldn’t treat his men the way they were.

Your father wrote in the tradition of Twain, in a folksy, often funny style that might seem easy to pull off to some, but of course it wasn’t. What were his working habits like?

He was gawky, self conscious, quiet, serious and devoted to the art of writing and rewriting. He was passionate about getting it right.

What was your personal relationship with your father like? What was it like to live with him when you were young?

You don’t get a lot of childhoods and fathers so as to compare them. I think I knew my Dad well. We got each other’s jokes. My wife says he and I have the same wry, quirky, backwards way of looking at things. It seems normal to me. It puzzles me that other people consider it unusual. He taught me to play chess at a young age but did not take it well when I beat him.

There were quite a few years when it was not at all certain that your father would become a successful writer. What turned things around? What was that like for him and you and your family?

He would agree that much of life and his success was luck. You can tell it in a way that makes it sound like it makes sense but it was truly chaos. My parents moved us to the Cape when I was 4 after he sold a few short stories. Then things didn’t go so well and he took strange jobs like writing ads and selling cars, which he wasn’t good at. They almost ran out of money and argued about that and whether or not you could get food poisoning from lobster left in the refrigerator overnight. They both grew up in Indianapolis. Then my uncle died on a train that went off an open drawbridge and his wife, my father’s sister, died a day later of cancer. Is this all making sense? My parents took their four boys, ages 18 months to 14 years, into our home and somehow he wrote Sirens of Titan, God Bless You, Mr. Rosewater, Mother Night and then Cat’s Cradle and then Slaughterhouse Five, but it was too noisy around the house to write so he went to New York city to get a play produced. If this isn’t making sense, stop me any time.

Your father was a visual artist as well as a writer, and there is an assortment of his artwork in the book. How big a part of his life was art, especially in his later decades?

He loved art. It was always important. He thought people should try to write and paint and make music because it helped people grow as people. The products themselves were interesting but less important than the trying.

Back in the 1970s, you wrote a memoir of your mental breakdown and recovery called The Eden Express. Later you went into medicine and became a pediatrician. Do you have plans to write more?

Yes, I have a 2nd book that I am working on now. I write all the time too and hope that publishing and making money at it isn’t the most important part.

You had to give your father’s last speech in April 2007. What was that like? What was the speech about?

It was hard. He had died 2 weeks prior to the speech and the memorial service was held 4 days before my family and I flew out to Indianapolis. I laughed and cried throughout it. Kurt could say anything and get away with it because the world was in love with him.

Did your father leave other writing that hasn’t yet been published? Are there plans to publish it?

We’ll catch our breath and see how this one goes. There is a ton of unpublished stuff. We’ll figure it out as we go along.

What do you think your father’s legacy will be?

He wrote honestly, beautifully with humor and passion and honor. He believed our world could be a better place if we were kind to one another and took the time to try a little harder.