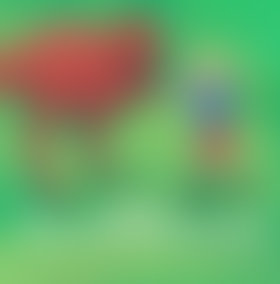 All the time she was growing up, first in rural Ohio then, after she turned 11, in Los Angeles, California, Anna Grossnickle Hines read and drew. Sometimes she wrote, but she was shy about that and usually tore it up. Her parents and teachers encouraged her, but none of them could tell her much about how to go about “making books”.

In college Anna’s teachers told he she had too much talent to waste on children’s books.  They said ”only Picasso gets away with drawing children,” and she should “go have a baby, get it out of [her] system” and come back when she was ready to do “real art.” So at the end of her third year, having taken all the basic art courses, a class in Children’s Literature and another in Child Care and Management, she left school to study on her own.  She checked out stacks of books from the library and read them to the preschoolers in the day care center where she worked. She read books about writing and illustrating books for children and she experimented with printing techniques. She also started writing… poetry first, then a few picture books that she timidly shared with friends who encouraged her to keep it up.

Over the next decade, Anna continued her writing and drawing and collected over one hundred encouraging rejection letters from various publishing companies…eighteen of them from Susan Hirschman at Greenwillow. Then on Friday, November 13, 1981, instead of sending a nice rejection letter, Ms. Hirschman called to say, “We’d like to publish Taste the Raindrops.” A year later she sold Come to the Meadow to Clarion, and Maybe a Band-Aid Will Help to Dutton.   Anna is fascinated by children, by how they think, what they accomplish on a daily basis, how they learn about their bodies, their language, the world around them, relationships with others…how they sort it all out and make sense of it. What is commonplace to adults is new and engaging to children and Anna enjoys putting herself in that mode. Every once in a while, she has the additional reward of hearing from a child, or parent of a child, for whom one of her books has meant something special. Then she’s really glad she didn’t listen to her college teachers.

I Am a Tyrannosaurus