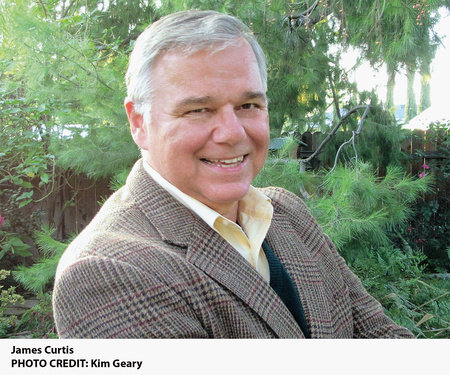 JAMES CURTIS is the author of William Cameron Menzies: The Shape of Films to Come, Spencer Tracy: A Biography, and W. C. Fields: A Biography (winner of the 2004 Theatre Library Association Award, Special Jury Prize), among others. He lives in Brea, California.

When looking at production design in cinema, it is impossible to overlook the importance of William Cameron Menzies and his place in cinematic history. Winning the first ever Oscar for Art Direction, in 1928 for “Tempest,” Menzies represents the father figure of an industry and his influence can still be seen in film design today. During a career that spanned almost forty years, Menzies was responsible for some of the most iconic films of the twentieth century including “Gone with the Wind” (1939), “The Thief of Bagdad” (1924), and “Invaders from Mars” (1953) while also working with other cinematic icons including Alfred Hitchcock and D. W Griffiths. Film historian James Curtis’s latest biography, William Cameron Menzies: The Shape of Films to Come, charts the story of Menzies’s illustrious career, which oversaw huge transitions in cinema – including the shift from silents to sound and the move toward color pictures. Menzies’s meticulous approach and careful planning gave his sets a unique aesthetic and transformed the idea of set design by integrating the architecture into the on-screen action. Interviewing those closest to Menzies and examining his artwork, Curtis creates a vivid portrayal of an extraordinarily talented artist. Following the release of his new book, Curtis spoke to us about his research process and the legacy of a cinematic great.

PENGUIN RANDOM HOUSE:What led you to the life of William Cameron Menzies as a subject? Was “Gone With the Wind” the original inspiration or was your interest piqued in some other way?

JAMES CURTIS: Actually, I first encountered Menzies’s work as a child when I saw “Invaders from Mars” on television. That film really stuck with me because Menzies told the story from the boy’s standpoint, and the imagery was unlike that of any film I had ever seen. “Invaders” was creepy in a very subversive way. It wasn’t until years later that I saw “Gone With the Wind” and then, ironically, it was the widescreen version that did such violence to Menzies’s compositions. I don’t think I saw it properly formatted until sometime in the 1980s.

PRH:What do you feel was Menzies’s role in the transition from visual storytelling to emotional narratives based on the actors?

JC: I think Menzies’s work helped vivify the material entirely apart from the actors. To him, actors were graphic elements to be incorporated into his compositions. He was perfectly happy to stand aside and let a director like Sam Wood work with the actors. He spent his time behind the camera, thoughtfully composing the shot and drawing out values that deepen the impact of the drama — pattern, tonal qualities, light and dark, color, the overall judgment of what to include in order for each shot to make or enhance a dramatic point. As an art director, Menzies was designing sets. As a production designer, he was filling the entire frame with meaningful imagery, of which the set was just one piece of the puzzle.

PRH:In your research, was it difficult to find footage or documentation of the experience behind the screen? If so, how did you work around this challenge?

JC: Yes, because Menzies started in 1917 and died in 1957. Most of the significant people he worked with in his prime were long dead when I came to this project. I spoke to the ones I could and, fortunately, the family had a lot of significant material, including, for instance, his letters home while he was making H. G. Wells’s “Things to Come” in England. I think the challenge of any story like this is knowing where your beats are, and those aren’t always where you have the material you need. As John McPhee recently said, “Creative nonfiction is not making something up but making the most of what you have.”

PRH:Since Menzies often collaborated with other designers, how did this collaboration affect your research and identifying Menzies’s own work?

JC: The most useful thing to know is the fingerprint Menzies left on his work. Even when working through an illustrator, his eye, his point of view, was unmistakable. Even when he collaborated with Alfred Hitchcock, his influence could clearly be seen.

PRH:Can you tell us a little about what artworks of Menzies there are out there? Is there any way the common film fan can get to see them?

JC: I’ve always thought an exhibition of his work was a natural for the right institution, but so far it hasn’t happened. Perhaps now that the book is out, someone will step forward. As with any artist, it makes sense to give people a chance to see the originals up close.

PRH:How does Menzies for you compare to the early European auteurs like those of German Expressionism and their strong set design? Is Menzies an American equivalent?

JC: In a way, I think he is. He was certainly a great admirer of European films, and had the chance to see many of them in Los Angeles in the late 1920s. Like the great expressionists, Menzies was a strong stylist with very definite ideas of what he wanted to convey. Visually, his films are as distinctive as any to emerge from Hollywood in the 1930s and ’40s.

PRH:Have you any idea as to what subject you’ll turn your attention next?

JC: I’m currently finishing up work on a biography of Mort Sahl, which has been a new challenge in that the subject is still alive and kicking. Mort was America’s first modern standup comedian. Lenny Bruce, Nichols and May, Shelley Berman — they all came in his wake. Once the Sahl book has been put to bed, my next subject will be Buster Keaton, again for Knopf.