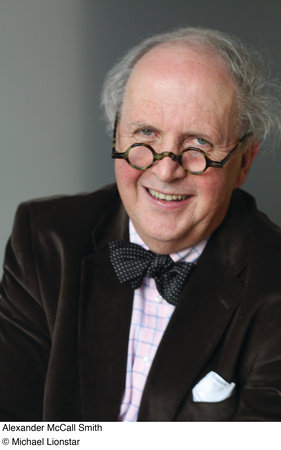 A Song of Comfortable Chairs

The Sweet Remnants of Summer

The Man with the Silver Saab

In a Time of Distance

Love in the Time of Bertie

Mr. Sampath-The Printer of Malgudi, The Financial Expert, Waiting for the Mahatma

Swami and Friends, The Bachelor of Arts, The Dark Room, The English Teacher

Alexander McCall Smith is best known for his No. 1 Ladies’ Detective Agency novels, which are bestsellers around the world. Though he is a renowned mystery writer, Alexander has explored many other genres in his writing – fiction and non-fiction alike. We got the chance to speak to Alexander about Chance Developments – a splendid fictional short story collection inspired by antique photographs. Read on to learn more about Alexander’s writing habits and inspiration, and to hear what advice he has to offer aspiring writers.

ALEXANDER MCCALL SMITH: I think that for as long as I can remember I have wanted to write. During my career as a university professor, I wrote in my spare time. Then there came a point when my books started to be somewhat successful, and that is when I had to decide to do one thing or the other. I chose to be a full-time writer – and I have not regretted that decision.

PRH: Do you know you’re writing a short story from the moment you begin, or does the form reveal itself to you as you write?

PRH: The stories in Chance Developments are inspired by vintage photographs, which are laced throughout the book. Where did you come up with this idea? Have you drawn inspiration from photographs in previous writing?

AMS: Some years ago I was asked by Robert Flynn Johnson, a well-known American historian of photography, to write an introduction to “The Face in the Lens”, a book he was bringing out on anonymous photographs (photographs of unknown photographers of unknown subjects). We have all probably come across such photographs in old albums or in boxes in the loft, but we may have no idea of what the photograph is about. I made up stories about what these photographs might be, and years later I decided to do a book of stories around such photographs.

PRH: While writing Chance Developments, did you know where each story was going to go right after looking at the photograph, or did your stories evolve over time?

AMS: The essential idea as to what was going on in the photograph came to me quite quickly. As I began to write the story, further ramifications opened up. What I did, in effect, was to ask myself: who are these people? I found that their back story then came to mind rather quickly. It was as if they had always existed.

PRH:What’s one piece of advice you would give to all aspiring young writers?

AMS: I always advise young writers not to get too fixated on their first novel. The moment they finish that, they should start on the next one – which will usually be much better. The first novel is often a therapeutic exercise, in which personal issues are dealt with. Once you’ve done that, move on to the next subject! You should accept that your first novel is probably never going to be published – but the second one might.