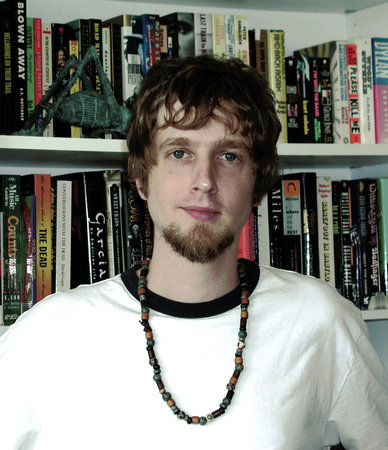 "[I know] what it’s like to be scared, and to put things off, and to worry about opening up to perfect strangers. Which is sort of akin to the process of being a human being, even if you aren’t a writer. . . . And seriously, what is writing, other than telling stories about being a human being?"–Daniel Ehrenhaft


If there’s one thing you can say about Daniel Ehrenhaft–aside from the fact that he’s worn the same corduroys for the past eleven years–it’s that he has a difficult time writing about himself. So when Random House asked him to contribute a little autobiography for this Website, he was naturally apprehensive.

At first, he decided to do some research on the subject of autobiography. He referred to this very site to read what other Random House authors had written about themselves. It didn’t help. For starters, he discovered that all these authors led fascinating, productive lives. To make matters worse, they all offered trenchant insight about what it means to be a writer.

As far as Mr. Ehrenhaft can tell, his own life as a writer boils down to a six-part regimen:

1) Drinking cheap coffee
2) Procrastinating (fiddling with the stereo, playing air guitar, etc.)
3) Reading a lot. Often, he’ll read something brilliant or moving or hilarious by someone he’s never read before, someone whose words end up blowing his mind–which is followed by
4) Jealousy and panic
5) Lunch
6) A nap

But, in a strange way, this process does eventually inspire him to put pen to paper. (Or his fingertips to the computer keyboard, as it were.) After all, he knows what it’s like to be scared, and to put things off, and to worry about opening up to perfect strangers. Which is sort of akin to the process of being a human being, even if you aren’t a writer.

And seriously, what is writing, other than telling stories about being a human being? If that sounds evasive and simplistic…well, maybe it is. On the other hand, that’s probably why a lot of writers do what they do. They open up in their stories in ways that–at their best–illuminate truths and complexities not only about themselves, but about their readers, as well. They write precisely so they don’t have to be evasive, which is what makes reading such a blast.

So really, Daniel Ehrenhaft just writes because he loves to read, and he aspires to do what all his favorite authors have done for him. In fact, if he had it his way, he would get paid to read. Then again, if he had it his way, he and his wife would live in a huge castle with a billiards room and a pool shaped like a figure eight, and a custom-made electric guitar signed by the surviving members of The Clash.

Until that happens, though, he’ll probably keep writing.

10 Things to Do Before I Die

The Last Dog on Earth