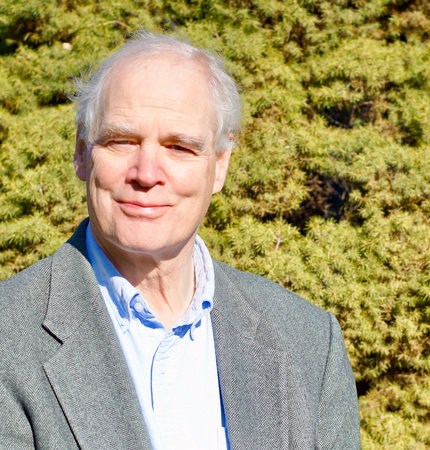 Andrew Clements is the New York Times bestselling author of the beloved modern classic Frindle,which has sold over six million copies, won nineteen state awards (and been nominated for thirty-eight!), and been translated into more than a dozen languages around the world. Called the “master of school stories” by Kirkus Reviews, Andrew is now the author of over eighty acclaimed books for kids. He lives in Maine with his wife, Becky. They have four grown sons and two rascally cats. Visit Andrew online at andrewclements.com.

What do you have to have by you to write?

A bottle of cold water and a few M&M’s often come in handy . But it’s more what I have to have in front of me and ahead of me to write. In front of me, I need my computer—usually my Mac portable—or if I’m in manual mode, I need a pad of paper (I like graph paper best) and something to write with. I’m often in manual mode at the very beginning of a book or in the middle if I get stuck; or if it’s the middle of the night and I get an idea I need to catch. For most writing sessions, though, I use the laptop.What I need ahead of me is time. Before I sit down to write, I need to be able to see at least four or five hours ahead without any appointments or errands or demands other than writing.

Most of the time I write in a little shed in my backyard. It’s small, only ten feet wide and twelve feet long. It’s about seventy feet from the back of the house, and it’s quiet out there. There’s no phone, no e-mail, no TV, no music system. There’s a door and two small windows. There’s an air conditioner for the summer and a woodstove for the winter. There’s a three feet by six feet plank-top desk, a comfortable desk chair, and the laptop computer I carry back and forth. And there’s also a folding cot that my wife and kids gave me for Father’s Day last year. And that’s it.

What time of day do you get your best ideas?

I don’t like to put a time limit on good ideas, because, generally speaking, they arrive whenever they’re needed. But I do love how quiet it gets about ten-thirty at night, and from then to about three in the morning are often my golden hours.

I have no particular clothes for writing, no special hats or magical tweed jackets. I’m most often sighted wearing khakis and a polo shirt, but I wear that whether I’m mowing the lawn or tapping out a chapter.

My wife, Rebecca, is my first and best critic. After she’s read it, it goes to my kids. When work is ready to leave the house, it goes to my agent and the project editor, sometimes one before the other, sometimes simultaneously. “Do you read reviews of your own work?” Yes. It’s hard not to. You learn to be grateful for the good ones. You learn to be tolerant of the ones that completely miss the point or jog off into intellectual meanderings and petty comparisons. You learn to resist the temptation to fire off an indignant email. When reviewers write, I nod politely. I hear what they have to say. But when librarians and teachers and parents tell me what they think, I listen.And when kids tell me what they think, I really listen.

I’m reading a nonfiction book about the movie business by a novelist and screenwriter named William Goldman. He’s the man who wrote the novel and later the screenplay for The Princess Bride, and the screenplays for a lot of great movies. The name of the book is Which Lie Did I Tell? When I’m in the middle of writing a book—which is most of the time now—I mostly read nonfiction. Reading fiction while writing fiction is hard, partly because it’s hard to put a good book down. Reading someone else’s work is so much more enjoyable than doing work of one’s own. Also, I’ve noticed that if I’m filling my head with another writer’s world, and that’s always how it feels when it’s a good book, then elements of that writer’s style can start seeping out the ends of my fingers and onto the pages of the book I’m writing.

What was your favorite book as a child?

When very young it was the Winnie-the-Pooh books by A. A. Milne and The Little Fireman by Margaret Wise Brown. Later, I loved The Call of the Wild by Jack London, Kidnapped and Treasure Island by Robert Louis Stevenson, the Sherlock Holmes mysteries—all sorts of books. I read a lot.

What was the first book you remember reading, or being read to you, as a child?

My mom often read to me at bedtime. The memory race is a tie between a book of illustrated Bible stories and The Little Fireman.

I knew I loved reading and books early on, but didn’t realize I was a good writer until a high school English teacher named Mrs. Rappell made me work at it. Once I’d figured out I was a pretty good writer, I went through years and years when I wrote short things—mostly poems, descriptive sketches, song lyrics. I wrote short things because I didn’t make the time to write and because writing for me is not easy—which is true for most people, and which is especially true for most writers. I taught school for years and was good at that; I worked as an editor for years and was reasonably good at that, too. Knowing I wanted to be writer was not a lightning-bolt moment. I simply discovered over many years that writing is what I seem to do best.

My road to publication wasn’t the one most traveled, where one slaves away for years, suffers endless rejection slips, and finally, finally, some dear brilliant editor recognizes one’s talent. In 1987 I was working as an editor for a publishing company called Picture Book Studio, and the boss asked me if I would try to write a story for a wonderfully talented illustrator named Yoshi. I said yes, and the story that emerged became the book Big Al.

Let’s think—was it a yacht, or was it a house in Maine? Hmm . . . . Ah, now I remember. As I recall, that cash probably went towards the purchase of diapers and a few bags of groceries—maybe even part of a mortgage payment.Why? Because, A. it wasn’t much money; and, B. those purchases for one’s family are truly some of the best treats money can buy.

What’s the best question a teen has ever asked you about your writing?

A boy once asked me, “Aren’t you afraid you’re going to run out of things to write about?” Thought about that one carefully. But the only answer has to be no. One of my greatest discoveries has been that there is no shortage of good ideas.

Tell us about writing Things Not Seen.

I wrote the first draft of Things Not Seen in 1996, right after I’d finished my first short novel, Frindle. Things Not Seen was longer than Frindle, and in that earliest draft, was quite different from the book it’s now become. But the heart of the book has always been the same: What would it be like to be a normal kid and wake up invisible one morning? Not just feeling invisible or insignificant, as many people have at one point or another in their lives. But actually invisible. What would that do to a person’s life and a person’s thinking?

At least four different editors, smart people whose opinions I valued, said “no thanks” to Things Not Seen. Some were mildly interested, and offered ways the first draft might be improved. But then Frindle got to be remarkably popular, and suddenly I was busy with a number of other novels for kids in the intermediate grades. And my first young adult novel sat in a heap on the shelf in my office.

Patricia Gauch at Philomel Books is one of the editors who’d said “no thanks” to the first draft, but she was the one who most agreed with me that the book had a quirky, compelling story at it’s heart. So in June of 2000 I sent it to her again and said, “We both agree that there’s something here, something of value. I’m willing to pitch into the work and completely rethink this book, but at this point in my career, unless an editor is willing to give me a small advance, write up a contract, and set me a deadline, I’m never going to get back to work on this story. What do you think? Are you that editor?” And Patti reread the original draft, and said, “If you’re willing to work, then I am that editor.”

Reworking this book is one of the best experiences I’ve had so far as a writer. This is a book that needed time. When the moment came to get back to work, I was far enough away from the original draft to be able to cut away all the distractions and the subplots that did not get to the heart of this boy’s struggle to find himself. Also, I think I’d grown as writer of longer fiction to the point where I was able to make good use of the remarkable assistance and guidance offered by a great editor.