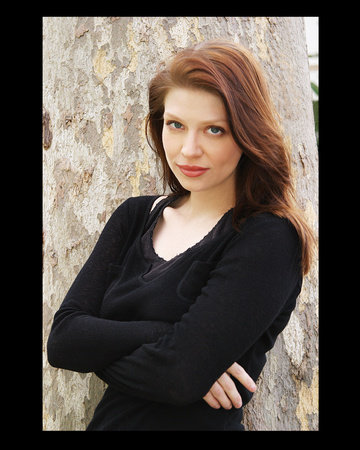 Amber Benson is the author of the Echo Park Coven Novels and the Calliope Reaper-Jones Novels. She cocreated, cowrote, and directed the animated supernatural Web series Ghosts of Albion with Christopher Golden, which they followed with a series of novels, including Witchery and Accursed, and the novella Astray. Benson and Golden also coauthored the novella The Seven Whistlers. As an actress, she has appeared in dozens of roles in feature films, TV movies, and television series, including the fan-favorite role of Tara Maclay on three seasons of Buffy the Vampire Slayer. Benson wrote, produced, and directed the feature films Chance and Lovers, Liars and Lunatics.

The End of Magic

The Witches of Echo Park

How to be Death

Having spent three years of my life living in Sunnydale, CA as a member of the Scooby Gang on the television series “Buffy the Vampire Slayer“, I guess it wasn’t a very far leap for me to start writing urban fantasy, with a strong female protagonist who has (I hope) a sense of humor. It almost seems fitting, really. I learned a lot working on Buffy about cute little girls battling nasty old beasties and getting super pissed when they broke a nail in the process, so it’s nice to finally find an outlet for all the useful (and useless) knowledge I acquired on the job.

The one thing I have always been curious about, as a reader (and now writer), was where did other authors get their ideas? From what I’ve read in my favorite writers’ memoirs and interviews, many of them say that their stories are literally crafted out of the ether that surrounds them; in chance meetings with old friends, things read or seen on television, experiences had as one goes about one’s day to day life. These small interactions somehow strike a chord inside the author’s imagination—and when properly marinated, then paired with one another like fine wine and meat—a novel or short story is born.

I would be lying if I said there wasn’t a very large component of this in my own story composition, but added to it, in an almost supernatural manner, is the creature I like to call ‘my muse’. I imagine her as a pert, blonde cherub of a thing, sitting on high somewhere as she sends me my ideas—most of them pretty surreal and strange. I guess, if I subscribed to Jungian theory, I would name my muse ‘the collective unconscious’, but somehow that just doesn’t appeal as much to me. I like the old Greek style of thinking, as they are much more romantic than Jung’s “my experiences are totally having an orgy with everyone else’s experiences” school of thought.

Now, I’m not quite sure what my muse was thinking when she sent me Calliope Reaper-Jones. The damn character popped fully formed into my head and started babbling at me, insisting I start writing her story as soon as humanly possible. At the time, I figured she was good for one outing, but thankfully, my editor, Ginjer, knew immediately that Calliope was special and deserved at least three books in which to impart her tale.

Boy, was Ginjer on the money. I can’t seem to stop Callie from getting into situations that just have to tales told!

But seriously, I have had a blast learning about Callie and all the eccentric friends and ‘frenemies’ that people her universe. I literally laugh out loud—to the bewilderment of the other folks sitting in the coffee house I like to write in—as my muse dictates Callie’s trials and tribulations. Of course, while my muse is pretty great, she does make me do some work, namely of the research variety. I’ve gotten to know more about mythology and religion than I ever thought possible—and I have to say that The Gopi are probably my most favorite ladies in the whole Hindu cannon. Even though I have perverted their true nature a little bit for the sake of my story. (Yes, Callie’s world encompasses many different myth systems. After all, Death is universal, so his daughter would be too!)

As you can see, I have an affinity for all things spiritual and supernatural, so I suppose you could say that Calliope’s world embodies all the things in life (and the Afterlife) that I find intriguing. I’m just lucky enough to have a muse who gets me and sends me the kind of stories that I enjoy curling up with myself.

So I hope you enjoy reading Death’s Daughter as much as my muse and I enjoyed writing it.

Amber Benson is an author, actor, producer, and director. You may know her from her days as Tara Maclay on “Buffy the Vampire Slayer,” but her career has spanned many more projects than that. As an author, she has written the Calliope-Reaper Jones novels and the Echo Park Coven novels, and co-written several others. While both series are urban fantasy, they each have a completely different tone. The Echo Park Coven novels tell the tale of a coven of witches fighting to save magic from total destruction. The last book in the series, The End of Magic, is out now! Read on as we discuss sisterhood, Nazis, and the magic of physical places.

PENGUIN RANDOM HOUSE: The witches of Echo Park, and in covens around the world in your books, feel very real. They don’t always get along, they have their interpersonal issues, but at the end of the day, they will always come together to support each other. Are they based off anyone in real life?

Amber Benson: The women in the Echo Park coven are actually based on my own personal friend group – each character is an amalgam of the many important friends in my life. I felt like the idea of intersectional sisterhood gets short shrift in storytelling…and I wanted to explore what it means to be part of a diverse group of women who are there for each other even if they don’t always agree about ideology.

PRH: The simple act of sisterhood feels like an act of resistance in these books, especially with the seemingly male-dominant group of antagonists, The Flood. Was this a conscious decision on your part?

AB: Not conscious…but looking back, I guess there is a part of me that had always intuited how badly women need to find a way to come together and support each other – and that includes women from every walk of life. If we are going to survive as a democratic, egalitarian, and forward-thinking society, women have to stop putting each other down and start lifting each other up…because it’s gonna take a unified women and women-identifying front to stop the egregious abuse of power that is working to strip away women’s rights.

PRH: The Flood is a terrifying sect that’s trying to bring about the end of magic and witches. They’re the epitome of intolerance — a horrific blend of Nazism and fantasy. Why did you choose them as the villains of the story?

AB: As a half-Jewish girl from Alabama, I’ve always been fascinated by the Third Reich and the idea that true evil can and has existed in the world…which is evidenced by the horror that the Nazis perpetrated during the holocaust.  I wanted to explore the idea of evil being a palpable thing that we, as human beings, have to fight against…and I also wanted to talk about the opposite perspective…the evil perspective, if you will, and the people on that side of the story who feel like their cause is a just one, too. I think All Quiet on The Western Front was an inspiration for me…the idea that everyone has a point of view and raison d’etre…a purpose that may be the polar-opposite of my own – and that I would term ‘evil’ – but is completely valid in their mind.

PRH: Dealing with past trauma is a major theme in these books, and for some characters, that trauma is never fully resolved. Was that a theme you set out to discuss, and why did you decide to leave some issues relatively unresolved?

AB: Life is messy. Bad things happen to good people and there is no reason why…nothing we can point to and say: “Oh, it’s because of this or because of that.” This idea terrifies the crap out of us and forces us to deal with a really scary fact of life…that we have zero control over what happens to us. We can lead exemplary lives and be charitable and kind-hearted…but we might still get hit by a car the next time we step off a crosswalk. Trauma happens to everyone. It’s the price of doing business. Of being human. Trauma colors who we are and even when we deal with it, it leaves its scars. I love therapy. I think of it as the gift I give myself…but I’ve learned through the process that we are always growing and changing…always unpacking old hurts and looking at them…always trying to untangle the mystery of who we are and why we do what we do…there are no answers…just more questions…and that was one of the themes I was interested in exploring as I was writing this last book.

PRH: Echo Park seems like such a magical place, and it is actually a real place in L.A.! Are there any other places you feel inspired by?

AB: Echo Park is most definitely a real and super magical place – Eleanora’s house, Echo Park Lake, the swing…all real places I’ve been to…I’m a big urban explorer and the stair streets of Echo Park are beyond magical…I would actually take walks that were based around the fruit trees in the neighborhood…I’d walk one set of stairs that had a fig tree at the top and then walk down a weird loopy set of stairs cause they had orange trees along the side of the hill…even now you can still walk down Sunset and get an espresso at a hipster coffee house then go next door and buy a spell at one of the many local Botanicas. As far as other places that inspire me…hmmm…I loved China…the Great Wall was one of the most magical places I’ve ever visited.

PRH: Was there anything you found surprising while you were doing research for your novels? Or anything particularly odd or wonderful?

AB: I became obsessed with the Atlas Obscura website while I was doing my research…so much so that I made it my home page. It’s an Amber Benson highly recommended online destination for the weird, wonderful and odd! Plus, I know they do a walking tour of Echo Park every now and again…so the perfect way to get your Witches of Echo Park fix.

PRH: You’ve taught some courses on writing–is there anything you can tell someone just starting out?

AB: Just write. Sounds so simple, right? But it’s all about getting words down on paper/screen…even if you don’t end up using them. The craft of writing is…just…writing.

AB: I think I have put the blood sisters to bed for a while…I loved living in their world, but I’m ready for some new adventures. I’m co-writing (with Sarah Kuhn) the new CLUELESS comic from Boom Studios…and doing some film/television writing…so that’s keeping me busy. Haven’t figured out the next book I want to write yet, but I have some ideas percolating.