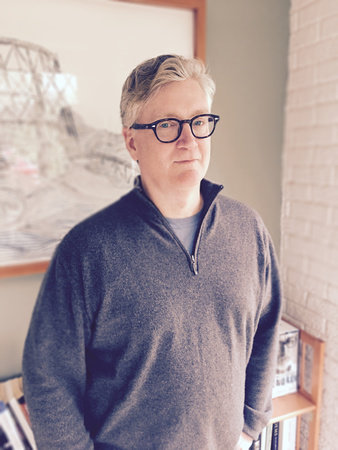 Jonathan Dee is the author of seven novels, most recently The Locals. His novel The Privileges was a finalist for the 2010 Pulitzer Prize and winner of the 2011 Prix Fitzgerald and the St. Francis College Literary Prize. A former contributing writer for The New York Times Magazine, a senior editor of The Paris Review, and a National Magazine Award–nominated literary critic for Harper’s, he has received fellowships from the National Endowment for the Arts and the Guggenheim Foundation. He lives in Syracuse, New York.

Jonathan Dee opens his new novel The Locals on the day after an unnamed tragedy that shook the country to its foundations and left many Americans in a state of numb disbelief. No, not the current presidential election, but 9/11. Yet the ties between the events that Dee describes in his book — which he finished well before November 2016 — and the current political climate are downright uncanny. In The Locals, residents of a small, semi-depressed Massachusetts town are initially elated when a New York City billionaire relocates and starts pouring his own cash into civic projects, for motivations that remain unclear. But as the book progresses, Dee explores the way the selfishness, resentment, and a bitter sense of being denied some vital, yet unspecified reward that is their right as Americans causes the town’s citizens to act against both their own best interests and the interests of the populace. Dee spoke to Penguin Random House about the growing class divide that in part inspired his latest work.

PENGUIN RANDOM HOUSE: The Locals ends years before the recent election, but it seems almost spookily prescient in its exploration of the growing rage and disenfranchisement of working class characters who wind up acting against their own best interests. How many of your characters do you think would have voted for Trump, had the novel extended into 2016?

JONATHAN DEE: Several of them, and not all for the same reasons. But I don’t want to name names, for the same reason I never mention any of the characters’ party affiliations in the novel: in the current climate those labels have become more of an obstacle to thought than an aid to it. I will say that Philip Hadi, despite playing a somewhat Trumpish role in the book, would surely be repulsed by Trump himself. So loud, so thin-skinned, so proudly impulsive! Back in the day, I’m sure Hadi went home early from more than one New York charity gala just because Trump was there.

PRH: Having written the book, were you surprised by the outcome of the election? Did writing the novel make you think differently about what it means to be an American, and what American voters want in a leader?

JD: Yes, even after having written the book I was as gobsmacked as nearly everyone else (Trump included) on Election Night. But, you know, even if he had lost, it’s not like the tremendous hostility, distrust, racism, misogyny, pessimism and savagery he tapped into, a current that runs through the lives of tens of millions of Americans, would somehow have disappeared. It’s that volatile incivility, that retreat into paranoid self-interest, that I wanted to write about in the first place.

PRH: One line that is repeated in the novel is “your problems are not my problems.” I read that as to imply that this philosophy enabled the rapacious capitalism that built towns like Howland and, by extension, our country. Almost all of your characters, whether rich or poor, liberal or conservative, share this viewpoint (with the exception being the youngest character, Haley, and her aunt, Candace.) Even the presumably liberal, progressive restaurateur is hoping to buy a farm out from under its owners, who have fallen on hard times. Why does this philosophy work better for some than for others?

JD: Capitalism tends toward self-interest, that’s true, and away from collective action for the common good (because it’s an article of faith that the sum of self-interest produces that common good); but even beyond that, I feel like something particular has crept into American public discourse in the last 15-20 years: the mainstreaming of the idea of the dismantling of the state, social programs in particular, which goes far beyond conservatism and into a kind of epic political regression. The idea embodied by the anti-tax activist Grover Norquist’s famous remark about wanting to shrink government until it was small enough to drown in the bathtub. (At one point I wanted to title the novel itself “The Bathtub,” but nobody would have found that funny except me.)

PRH: You open the novel in New York City on September 12, 2001. The story begins from the point of view of a first person narrator who is baffled and irritated by the outpouring of public grief, and is relieved when he sees New Yorkers go back to being uncivil and selfish. We never see him again, and the rest of the book takes place in a rural town and is told in the close third person from the viewpoint of alternating characters. Can you talk about your decision to open the book this way? Was this always your beginning, or did you add it later to set the stage for some of the ideas developed through the novel?

JD: This was always the beginning, and it’s unusual enough that I had to fight for it a bit, editorially. I felt like I had to begin with at least an invocation of 9/11, if not the day itself, because that day instigated a long political reaction that we didn’t recognize as a reaction for quite some time. By the same token, you don’t want the opening scene of your novel to consist of a bunch of characters sitting on their couches watching TV and crying. So I hit upon the idea of this nameless sort of underground man, an invisible ur-New Yorker who has a bizarre encounter with an out-of-town stranger who then turns out to be the novel’s actual main character. So the reader’s introduction to Mark Firth is the opposite of intimate — a weirdly jaded first impression, off the mark in some ways but pretty sharp in others.

PRH: Another process question: your cast of characters is vast, including nearly the entire population of Howland. How did you keep track of all them over the course of the book? Did you plot each one separately or did you write it straight through?

JD: I wrote each long chapter straight through, then revised it fully before going on to the next chapter. I did, at one point early in the process, sit down and write a sort of mini-biography of each individual character, so if at any point later on I felt like I was losing the thread, I could refer back to those. There’s a lot of material in those biographies that had to get chucked overboard, so to speak, for the sake of maintaining the forward momentum of the whole. But that’s almost always the case. It’s a bad sign if the book ends up containing everything you once thought it was going to contain.

PRH: Through the book, you transition from one character’s point of view to another within chapters and even within paragraphs, almost as though they are passing a baton — we will be in one character’s head as she picks up the phone to make a call, then will switch to another character’s perspective when she answers. The implication, it seems to me, is that we are all more interconnected than we think, so your problem IS in fact my problem. Can you talk a bit about the transitions between characters? It seems a particularly tricky technique to pull off, almost like shooting long scenes in a movie where the camera switches from following one actor to another without cutting in between.

JD: Each chapter has one little formal quirk that distinguishes it from the others (even if only to me), and in Chapter 2 it’s this: no space breaks. So all the point-of-view transitions have to be accomplished in some other, subtler way. That kind of technical challenge is fun for me (I did something similar in the first chapter of The Privileges), but still, formal quirks of any kind are hard to justify unless they’re there to reflect or enhance something about or within the story itself. So yes, the implication there is that our lives are all interconnected – especially lives in a small town like Howland – but there’s a flip side to that, a kind of emotional claustrophobia. People in that kind of setting – your family, your neighbors – tend to be a little bit more up in your business than you might wish they were.

PRH: The only character whose point of view we don’t see is Hadi, the Michael Bloomberg-like billionaire who moves to town and starts throwing around money and surveillance devices. Why did you omit his perspective? Was it necessary for the reader to see Hadi as as much of an enigma as the citizens of Howland? How is he different as a character from the also very wealthy people you wrote about in your Pulitzer Prize-nominated novel The Privileges?

JD: Who is Hadi? What does he want? Can we believe what he says? These are the questions that consume the citizens of Howland; keeping the narration outside of Hadi’s own head is a way of furthering that mystery, but also of not playing favorites among the characters, because if I let you know what Hadi’s thinking, then the other characters are suddenly either right or wrong, and your relationship to them changes . . . But you’ve also hit upon something here that brings up a political similarity between Hadi and Trump — or between Hadi and Obama, for that matter: the less an electorate knows about a prospective leader, the more wholeheartedly it will project onto that leader either its hopes or its terrors. Sometimes it’s simpler, more affirmative, to keep ourselves in the dark.