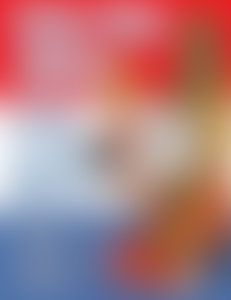 as observed by Vivian WalshOne evening, airborne, flying over the Arctic Ocean, Vivian Walsh and J. Otto Seibold came up with an idea for a children’s picture book. It was based on their real-time situation. The couple’s pampered New York City lap-dog was traveling with them, but unfortunately, riding below, in theluggage bin. They were worried that their dog, practically still a puppy, would not be pleased to be riding in the bottom of the plane, like a common suitcase. This was after all a dog with a first and last name, Dexter Lunch. Dexter to some, and Mr. Lunch to others. In New York he was welcomed in to many shops and restaurants. When company came to visit, Mr. Lunch would entertain. He can play the piano with his nose. He understands full sentences, especially if they contain the word, “ball,” or “park.”

Vivian and J. Otto compared Dexter Lunch to the other New Yorkers they were meeting. People in New York are focused on Careers. If Dexter Lunch had a career it would be in the field of bird-chasing. At the park when he stalks a bird you can practically hear his concentration. By some complexformula he can calculate just the right moment to pounce. His speed is so impressive even the pigeons are impressed. He never, never, catches a bird. That would wreck the game. He was very good, he was like a professional.

That became the story for the first children’s book, Mr. Lunch Takes a Plane Ride. A professional bird-chasing dog is invited to demonstrate his bird-chasing skills on television. This means he gets to take his first plane ride to get to the t.v. studio. If the authors ever got stumped as to what to write next they’d call their dog into the study. Order him to sit, and then observe…

The second book is titled, Mr. Lunch Borrows a Canoe. Vivian Walsh tries to recollect how that story came about: “I’m not sure why we put our leading man, Mr. Lunch, into a boat. That may have been inspired by a weekend we spent visiting some friends up the Hudson River. Not only did weget to escape a steamy and stinky humid weekend in New York City, our dogs were invited as well. We had a second dog by then. A weekend invite including dogs was very kind because Mr. Lunch, and our second dog, Olive, are Jack Russell terriers. A breed known for its manic energy, and of course like all manics they are intelligent but somewhat crazy.

“As soon as we got out of the car Olive made it clear by her actions she would have the hide of our hosts black cat. The cat was larger then Olive and had a sixth toe on each front paw. After listening to a few hours of barking, the cat made a move on Olive. Luckily, it only took one hiss to reveal Olive to be a dog of jello. No one was hurt. To give the cat a rest, and save Olive from further embarrassment, we headed for a near-by lake.

“One guy, Fred Tommaselli, an outdoorsman from Brooklyn, came equipped with an attache case. Inside, neatly packaged, was a deflated inflatable canoe. He blew it up, put Vivian and I in, and gave us a push toward the center of the lake. Now poor Dexter Lunch must have thought we were sneaking off, emigrating to another land, after all the animal fuss Olive had made earlier in the day.

Not much of a swimmer, he dove in, caught-up with us and started scratching, trying to climb into the very poppable boat. It was tricky getting a twenty pound frantic dog into a craft known for tipping over. Once rescued, and united with his masters, Mr. Lunch took his place at the helm of the boat, serious, stiff, scared. He never took his eye off the sometimes close, and sometimes not, shore. Mr. Lunch is such a city dog. I think that’s why I liked the idea of a dog getting put into a canoe by an overly generous elephant. Trying to remain in control while actually scared of nature. Then waking up in a city where everyone is at home in a boat, our favorite city, Venice.”

The Action Adventure Series of Mr. Lunch picture books continues with volume No. 3, Free Lunch. Despite Mr. Lunch’s strong cerebral side he is always running around and stirring up trouble. Mindful of his place, goals, and friends, Mr. Lunch somehow always becomes the center of unexpected adventure. That must be why there are these books about him. In Free Lunch, for instance, Mr. Lunch is minding his own business, when an evil elephant picks him out as an enemy. The angry elephant decides that Mr. Lunch has ruined his plan to sell bad bird seeds (dust and rocks) to the birds. So, he has Mr. Lunch arrested on a trumped-up leash law infringement. With the help of a bird and the good elephant Mr. Lunch is able to escape. Yes, he becomes a free Lunch.

Another book by J.otto Seibold and Vivian Walsh is Monkey Business, starring the first monkey astronaut, Space Monkey. It’s keep low key, but to be accurate, Monkey Business, is set in the future. Maybe five years ahead of it’s actual creation date. This places the book in the popular category of sci-fi picture book. Space Monkey is currently busy reviewing other children’s book for his vast internet part of the World Wide Web. He’s writing out his thoughts on Goodnight Gorilla, and Curious George. He’s able to get everything into internet code with the help of his good friend super computer.

“J.otto Seibold draws all of the time.
It’s his job.
He’s a professional.
He draws on a computer,
which makes him sort of like a scientist.
But he doesn’t wake up until noon,
which makes him like an artist.” Definite strong factors that developed J.otto Seibold’s drawing style:
1.) Drawing Hot rods
2.) Legos
3.) Japanese cartoons: watching Ultraman, and Speed Racer on t.v.

Sign me up for news about J. Otto Seibold and more from Penguin Random House