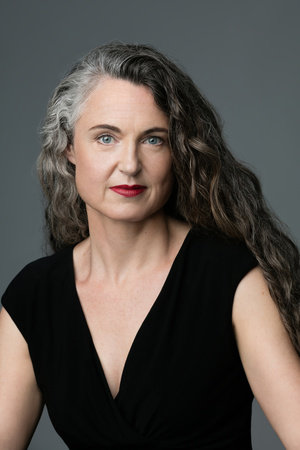 Jennifer Steil is the author of two previous books, The Woman Who Fell from the Sky, a memoir of her experience as a journalist in Yemen, and The Ambassador’s Wife, a novel about a hostage crisis that was also inspired by Steil’s own experience. She currently lives in Tashkent, Uzbekistan, with her husband and daughter.

News recently broke that Anne Hathaway has added another project to her roster: the story of an American woman – the titular ambassador’s wife – kidnapped in the Middle East. The novel on which this limited television series is based, The Ambassador’s Wife by Jennifer Steil, has been picked up by The Mark Gordon Company. Hathaway will star in and produce the series. Steil is also the author of The Woman Who Fell from the Sky, a memoir about her experiences running a newspaper in Yemen. She lives in Bolivia, where her husband is the European Union ambassador. We caught up with Steil to ask about her reaction to the adaptation news and more.

PENGUIN RANDOM HOUSE:It’s hard to imagine that your personal life – you are married to the EU Ambassador, living in Bolivia – didn’t at least in part inspire your debut novel, The Ambassador’s Wife. Why, though, did you choose the Middle East as its setting, rather than keep it to South America?

JENNIFER STEIL: I finished writing most of The Ambassador’s Wife before we moved to Bolivia. I conceived of the book in Yemen, began writing it in Jordan, worked on it for two years in London, wrote a bit more in Bolivia, and then finished it at a writing residency in Italy. But the book was almost fully realized in my mind before I ever encountered South America.

Now that we have lived in Bolivia for three years, and I have begun to learn more about the country, I am full of ideas for a Bolivia book. This will happen.

It’s worth noting that while the context of The Ambassador’s Wife is a bit autobiographical – it concerns an American married to a UK ambassador living in the Middle East – the narrative itself is entirely fictional. I have never nursed a stranger’s child, been held captive for a very long time, or painted provocative nudes.

PRH:Was it challenging to keep a divide between your own real-life experience and the events in the life of your character Miranda? How did you maintain that divide?

JS: It was not a struggle to divide my life from Miranda’s, because I see her as a fully separate person. Of course my life, opinions, and experiences inform hers, but her backstory is not mine. She is from Seattle. I was born in Boston. Her family life does not resemble mine. She is an artist and sees things visually. I struggle to draw stick figures. She lived with a girlfriend for six years. While I have been involved with women, I never spent that long with any of them. Miranda secretly mentors a group of Muslim women in ways their culture forbids, something I have never done. Miranda ends up bonding with a stranger’s infant and putting her husband at great risk. I hope this is something I will never do! To me she is very different, although the worlds we inhabit are similar. And we are both vegetarians who like to exercise.

PRH:There are currently so many misconceptions and ill feelings about the Middle East in the Western world. How did you navigate the touchier subjects without falling prey to untrue stereotypes among characters and events?

JS: Well, I lived in Yemen for four years, and spent time in Jordan, Egypt, and Lebanon. Living in the Middle East and becoming closely involved with its people is the best way to get beyond stereotypes. When I was the editor of the Yemen Observer newspaper, I often spent twelve hours a day with my Yemeni reporters. We talked about our work and our lives. We yelled at each other. We shared secrets. We joked with each other. They were the people I felt closest to at that time. For my first several months in Yemen I very rarely saw anyone but Yemenis. I formed strong and intimate bonds with my female reporters, which I maintain to this day. One of my closest friends, who was also my star reporter at the paper, rang me recently as Yemen was falling apart and said, “If anything happens to me, will you take my son?” Which gives you an idea of our relationship. The Muslim women in my book are greatly informed by my Yemeni women friends, especially by my friend Kawkab. Often the words that come out of my characters’ mouths are variations of things my Yemeni friends have said to me. Though none of them are painters, as far as I know!

It was important to me to create characters who are complex and fully realized people, not ideas in dresses.

PRH:Congratulations on the news that your book is being adapted for television. How did you react upon hearing the news?

JS: When I first heard the news, I was in New Mexico teaching and studying at a writing retreat. There was almost no phone reception at the ranch where I was staying, and Internet only in one or two places. So finalizing the deal was a technological challenge, given that I had to speak with several people on the phone to sort it all out. To make the most important call with my agent I had to borrow someone’s phone and run across the desert to the one spot with service. But it all worked out!

The whole thing felt and still feels surreal to me. I couldn’t tell anyone about it for the first several days, until the press release came out, and I felt I had to tell someone for it to feel real. But even now it still feels a bit like a fairy tale. I’ll probably start believing it when I see it on a television screen.

PRH:What do you most hope Anne Hathaway brings to the role of Miranda?

JS: Complexity and nuance. Anne is an incredibly versatile actor. I feel that she understands Miranda’s many layers, and will portray both the passion for art that gives Miranda tunnel vision and her love and compassion for the women she mentors, her daughter, her husband, and the child she nurses in captivity. I also hope she will allow Miranda’s humor to shine through in her banter with Finn.

PRH:Any thoughts you’d care to share on who you would choose to cast as Miranda’s husband, Finn?

JS: I would be the worst person to ask! Because I haven’t lived in the U.S. for nine years and have never owned a television (I promise to get one to watch the television miniseries!), I am hopelessly out of touch with the acting world. We do watch television series and movies on DVDs on our laptops, but usually years after the rest of the world.

But I hope that whoever plays Finn will be genuinely English (preferably from London) and able to be wise, kind, and electric all at the same time. Quietly authoritative, with a dry, understated sense of humor. Magnetically attractive. Tall with a spritely energy. I could go on.

PRH:Do you have any idea yet as to how involved you’ll be with the script, development, and production? How involved do you want to be?

JS: I have no idea. It’s just too early to know. I would love to be as involved as Anne and Mark want me to be. I know that I will be a consultant for the show.

PRH:Your first book, The Woman Who Fell From the Sky, was a memoir. This second, a novel. What’s next for you?

JS: Another novel. I’ve actually written another novel already, but I haven’t managed to beat it into a satisfactory shape, so it’s going into a drawer for a few years until I have what my editor calls a “reanimating idea” for it. In the meantime, I am beginning work on a Bolivia-related novel. That’s all I can tell you at the moment!

Learn more about the book below.