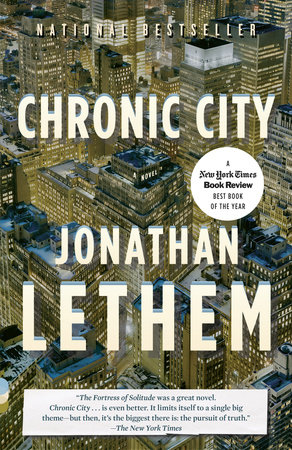 The questions for discussion and reading list that follow are intended to enhance your reading group’s discussion of Chronic City, Jonathan Lethem’s searing love letter to the city that has inspired his finest work.

Chase Insteadman, a handsome, inoffensive fixture on Manhattan’s social scene, lives off residuals earned as a child star on a beloved sitcom called Martyr & Pesty. Chase owes his current social cachet to an ongoing tragedy much covered in the tabloids: His teenage sweetheart and fiancée, Janice Trumbull, is trapped by a layer of low-orbit mines on the International Space Station, from which she sends him rapturous and heartbreaking love letters. Like Janice, Chase is adrift, she in Earth’s stratosphere, he in a vague routine punctuated by Upper East Side dinner parties.

Into Chase’s cloistered city enters Perkus Tooth, a wall-eyed free-range pop critic whose soaring conspiratorial riffs are fueled by high-grade marijuana, mammoth cheeseburgers, and a desperate ache for meaning. Perkus’s countercultural savvy and voracious paranoia draw Chase into another Manhattan, where questions of what is real, what is fake, and who is complicit take on a life-shattering urgency. Along with Oona Laszlo, a self-loathing ghostwriter, and Richard Abneg, a hero of the Tompkins Square Park riot now working as a fixer for the billionaire mayor, Chase and Perkus attempt to unearth the answers to several mysteries that seem to offer that rarest of artifacts on an island where everything can be bought: Truth.

Like Manhattan itself, Jonathan Lethem’s masterpiece is beautiful and tawdry, tragic and forgiving, devastating and antic, a stand-in for the whole world and a place utterly unique.

1. When do you think the action of the novel occurs? Is there a reason the time was left vague? Is this the “real” New York City?

2. At what point did you begin to suspect that Chase Insteadman was living a fiction? At what point in their story do you think Perkus Tooth understood that Chase had been deceived about his role?

3. Can you accept that Oona Laszlo is responsible for the letters attributed to Janice Trumbull? Is it possible, as a writer, to create another human being more generous, large-hearted, and responsive than yourself?

4. What is the meaning of the wild animals that intrude on the lives of these Manhattanites — the eagles, the tiger? Do they have anything to do with the weather?

5. Have you ever felt that the place where you lived or grew up was being turned into a ‘simulacrum’ of itself?

6. Have you ever tried to care for someone impossible? Are you now? Does Perkus Tooth remind you of anyone in your own life, or did you find Chase’s decision to befriend him misguided?

7. At different points in Chronic City Perkus Tooth seems to attempt to sustain himself completely on culture and language, then, alternately, to try to leave culture and language entirely behind and live a “pure” life. Do you think either approach is possible?

8. The author’s working title for Chronic City was “Manhattan“. The Woody Allen film by that name was often criticized for depicting a Manhattan consisting only of the white upper middle class. Is Chronic City self-aware about the limitations of its characters? Does Chase Insteadman’s response to the black kids he meets near the Urban Fjord, or to the black man in the jail cell imply another version of Manhattan creeping into view?

9. What does the gray fog hide?

10. Was Chase unfair to Oona? Should he give her another chance?

Jonathan Lethem is the author of seven novels. A recipient of the MacArthur Fellowship, Lethem has also published his stories and essays in The New Yorker, Harper’s, Rolling Stone, Esquire, and the New York Times, among others.
Learn More About Chronic City
print

Snuff
Back to Top