The Fortress of Solitude Reader’s Guide 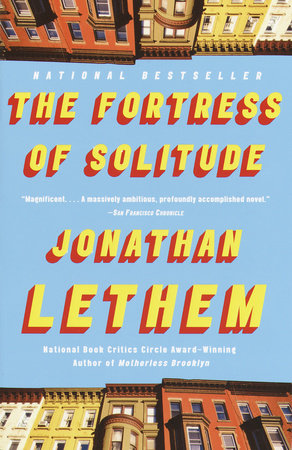 The Fortress of Solitude Reader’s Guide

The introduction, discussion questions, and suggestions for further reading that follow are designed to enliven your group’s discussion of Jonathan Lethem’s acclaimed novel, The Fortress of Solitude.

The Fortress of Solitude is both a poignant coming-of-age story and an unforgettable evocation of an urban neighborhood poised on the knife-edge of gentrification. When young Dylan Ebdus and his bohemian Jewish parents, Rachel and Abraham, move into a brownstone on Dean Street, they are the only white family in the neighborhood known as Gowanus, which is in the process of becoming Boerum Hill.

Dylan steps tentatively into the street and finds himself in a bewildering world of words and games, rules and resentments, which he does not understand. Dylan soon becomes the victim of almost daily “yokings,” his pockets emptied by older black kids in the neighborhood and at school. But as he slowly forms a friendship with Mingus Rude, he enters into the inner workings of the neighborhood, from stoopball and graffiti to street parties, pot and cocaine. When he is given a mysterious ring that confers upon its wearer the power of flight, he decides to emulate his comic book superheroes and become a crime fighter. And though the novel extends outward from Brooklyn to Vermont and California, and from the 1970s to the 1990s, it is Dean Street, Dylan’s childhood friendship with Mingus Rude, and fantasies of superhero rescues that remain at the center of Dylan’s life into adulthood, as he finds himself held back, inextricably entwined with his past.

In writing that is lyrical, elegiac, and lacerating, Jonathan Lethem offers readers a brilliant portrait of Brooklyn in the seventies and what it was like growing up the only white kid on the block.

1. Why has Jonathan Lethem titled his novel The Fortress of Solitude? Where does the phrase come from? In what ways is Dylan Ebdus a solitary child? In what ways does he live inside a fortress?

2. What does The Fortress of Solitude reveal about the dynamics of childhood friendships? What kind of friendship does Dylan have with Mingus Rude? With Arthur Lomb? Why does Dylan want so badly to be accepted by Mingus?

3. The Fortress of Solitude is a realistic novel, except for one fantastic element: the magic ring that enables its wearer to fly and to become invisible. Why has Lethem included the ring in the story? What effect does it have on Dylan? How is the ring crucial to the plot of the novel?

4. When Mingus asks Dylan if “everything” is cool, Dylan thinks of his science teacher explaining that “the universe was reportedly exploding in slow motion, everything falling away from everything else at a fixed rate. It was a good enough explanation for now” [p. 118]. Why does Dylan think of this theory at this moment? How does it explain Dylan’s neighborhood and home life?

5. What effect do comic books, pop music, and other aspects of popular culture have on the characters in The Fortress of Solitude? How is Dylan’s sense of self shaped by his fascination with comic book superheroes?

6. When he sees Dose’s tag on a sleeping homeless man, Abraham tells Dylan, “Maybe this is just a terrible place. Maybe in these streets right and wrong are confused, so you and your friends run insane like animals that would do this to a human person” [p. 141]. Is Abraham correct in his assessment? How does the Gowanus neighborhood affect those who grow up in it?

7. Abby tells Dylan, “Your childhood is some privileged sanctuary you live in all the time, instead of here with me” [p. 316–17]. Why is Dylan so obsessed with understanding his childhood? How have his childhood experiences made it harder for him to connect with others?

8. As Dylan is attempting to rescue Mingus from prison, he thinks of the “ordinary angst” he’d earned as a “grown-up Californian . . . an author of liner notes, an inadequate boyfriend,” and asks himself: “How could I have thrown over these attainments for this chimera of rescue?” [p. 488]. Why does he take such risks to rescue Mingus? What are his real reasons for offering the ring to Robert Woolfolk?

9. In what ways is The Fortress of Solitude a satirical novel? How are Hollywood and private school education depicted in the novel? How does Lethem present the world of science fiction publishing?

10. Near the end of the novel, Abby tells Dylan, “I guess being enthralled with negritude still beats self-reflection every time” [p. 457]. Is it true that Dylan is obsessed with race? Does he use that obsession to avoid self-knowledge? What is he afraid to discover about himself?

12. The Fortress of Solitude is a vivid evocation of a particular period and place, as seen through the eyes of Dylan Ebdus, and while the novel does not overtly make any large statements about race relations, what does it suggest about how blacks and whites see each other? What scenes particularly dramatize the tensions between blacks and whites in Brooklyn?

13. The Fortress of Solitude includes two self-contained chapters, “Liner Note” and “Prisonaires,” which function almost as set pieces. Why has Lethem included these? How are they different from the rest of the narrative? What do they reveal about Dylan?

14. In interviews, Jonathan Lethem has described the novel as structured like a musical boxed set. In what ways is this novel reminiscent of a boxed set? Why might Lethem have chosen this structure?

15. Much of The Fortress of Solitude concerns the gentrification of Gowanus into Boerum Hill. How has the neighborhood changed when Dylan returns at the end of the novel? Has the neighborhood been genuinely improved or simply turned into another playground for the trendy? What does Dylan mean when he says: “A gentrification was the scar left by a dream, Utopia the show which always closed on opening night”? [p. 508]

16. At the end of the novel, Dylan thinks of his mother pushing him into nearly all-black public schools “which were becoming only rehearsals for prison. Her mistake was so beautiful, so stupid, so American” [p. 508]. Why does Dylan think it was a mistake for Rachel to send him to public school? What does Dylan mean when he calls that mistake beautiful, stupid, and American?

Jonathan Lethem is the author of five novels, including Motherless Brooklyn, which won the National Book Critics Award, As She Climbed Across the Table, Girl in Landscape and Gun, with Occasional Music. He is also the editor of The Vintage Book of Amnesia and the author of the story collection The Wall of the Sky, the Wall of the Eye and the novella This Shape We’re In. His writings have appeared in The New Yorker, Rolling Stone, Harper’s, The Paris Review, McSweeney’s, and many other periodicals. He lives in Brooklyn, New York.

Snuff
Back to Top