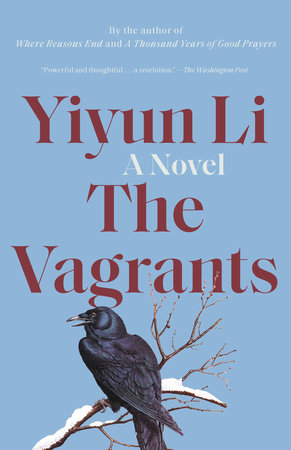 1. Gu Shan is a member of the generation that came of age during the Cultural Revolution. How do characters who are part of older generations—such as the Huas and Teacher and Mrs. Gu—act and react toward the revolution and then the later counterrevolution?

2. Among the many characters we meet in Muddy River, there are several distinct family groups, including Nini, her parents, and her five sisters; Bashi and his grandmother; Kai, her husband, baby, and in-laws; and Teacher Gu and his wife and daughter. What do these different family units tell the reader about family life in China since the revolution? What traditions have been upheld?

3. Teacher Gu reminds his wife of an ancient poem: “Seeing is not as good as staying blind” (page 103). What is he trying to tell her? Which characters experience incidents or confront issues of sight versus blindness? How does the message of this line relate to The Vagrants as a whole?

4. What does this novel tell us about being an insider versus being an outsider? How do characters who are clearly outsiders— such as Tong, who was raised in a village, and Bashi, who does not have a work unit—fare in Muddy River? How are they viewed by reg- ular workers and schoolchildren, and how do they interact with such characters?

5. Gu Shan’s denunciation brings together residents from all parts of Muddy River society, yet the reader does not know her as well as many other characters in the book. What can you infer about her character, beliefs, and behavior from the other characters? Is she guilty? Is she innocent?

7. Ghosts, such as those of Gu Shan or Bashi’s grandmother, are invoked at different points throughout the novel. What role do ghosts play in the minds of the characters? In the larger story? What does the juxtaposition of modern government propaganda with traditional beliefs such as the belief in ghosts illustrate?

8. When Han fears a reversal of his good fortune, he reminds Kai of the saying that “the one who robs and succeeds will become the king, and the one who tries and fails will be called a criminal” (page 208). He is clearly referring to his own political future, but to which other characters and situations in The Vagrants can this saying be applied? Do some of these situations recur in literature and history? Compare these external examples to the ones in the novel.

9. Though the events in the novel are complex, they represent only one relatively small, provincial city in the vastness of China. Stepping back, do you think that the circumstances in Muddy River were similar to, or differ from, circumstances in other cities in China? Beijing? How do the characters view Beijing?

10. The stark and vivid images in this novel are unique. Can you point out a few effective images that helped the novel come alive for you as a reader?

11. Discuss some of the most universal themes of The Vagrants. What makes them universal? In what ways do Yiyun Li’s distinctive style and use of language contribute to, or reinforce, these themes?

Learn More About The Vagrants
print

The Lizard Cage
Back to Top