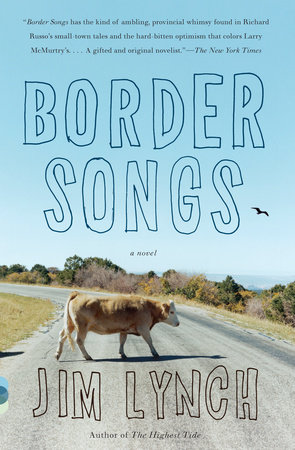 The questions, discussion topics, and reading list that follow are intended to enhance your reading group’s discussion of Border Songs, Jim Lynch’s first novel since his extraordinary debut, The Highest Tide.

Border Songs is the story of contrary destinies further complicated by the border that separates them.

Six foot eight and severely dyslexic, Brandon Vanderkool has always had an unusual perspective-which comes in handy once his father pushes him off their dairy farm and into the Border Patrol. He used to jump over the ditch into British Columbia but now is responsible for policing a thirty-mile stretch of this largely invisible boundary. Uncomfortable in this uniformed role, he indulges his passion for bird-watching and often finds not only an astonishing variety of species but also a great many smugglers hauling pot into Washington State, as well as potentially more dangerous illegals. What a decade before was a sleepy rural hinterland is now the front line of an escalating war on both drugs and terrorism.

Life on either side of the border is undergoing a similar transformation. Mountaintop mansions in Canada peer down into berry farms that might offer convenient routes into the budding American market, politicians clamor for increased security, surveillance cameras sprout up everywhere, and previously law-abiding citizens are tempted to turn a blind eye. Closer to home, Brandon’s father battles disease in his herd, and his mother something far more frightening. Madeline Rousseau, who grew up right across the ditch, has seen her gardening skills turn lucrative, while her father keeps busy by replicating great past inventions, medicating himself and railing against imperialism. And overseeing all is the mysterious masseuse who knows everybody’s secrets.

Rich in characters contending with a swiftly changing world and their own elusive hopes and dreams, Border Songs is at once comic and tender and momentous-a riveting portrait of a distinctive community, an extraordinary love story and fiction of the highest order.

1. “Everyone remembered the night Brandon Vanderkool flew across the Crawfords’ snowfield and tackled the Prince and Princess of Nowhere.” What does the first sentence of the novel tell us about what’s to come?

2. Have you read Jim Lynch’s first novel, The Highest Tide? If so, what similarities do you find in Border Songs? Differences?

3. What are the major themes of Border Songs? What point is Lynch trying to make? Is he successful?

4. On page 13, Brandon says, “I think the most interesting people I’ll meet these days will be criminals-or people about to become criminals.” Is he right?

5. Discuss Wayne Rousseau: Why does he try to replicate already-existing inventions? What is the significance of his choices-the lightbulb, The Great Gatsby? How does this intersect with his politics?

6. Compare Wayne and Norm. Why are they so antagonistic toward each other?

7. At several points in the novel, characters describe Brandon as seeing things differently, or seeing things that others don’t see. Why do you think that is? How does it help him and hurt him?

9. On page 79, Lynch writes, “Now [Norm] felt as if he’d sent his son to the front lines of a war he hadn’t realized was going on in his own neighborhood.” How does Norm deal with this guilt? How does the notion of a war affect the way the novel’s characters behave?

10. All around him, Norm’s life is in upheaval: His cattle are sick, his wife is sick, his son is attracting attention that Norm finds embarrassing. How does he respond?

11. How does Brandon’s relationship with the natural world-birds, cows, foliage, and so on-affect his abilities as a Border Patrol officer?

12. Discuss the area’s reaction to Brandon’s arrest of the bomber/smuggler, on pages 89-93. What is happening here?

13. Several Canadian characters compare the United States’ policy on marijuana to Prohibition. Are they right? How does this relate to the vast number of previously law-abiding Americans who are willing to work with smugglers?

15. On page 156, McAfferty says, “Bad shit has always passed through here, but now we’re watching so closely that we see way more of it.” Is this an accurate assessment?

16. Why is Norm building a boat, of all things?

17. What does Pearl’s death signify? Is it a turning point for Norm?

18. “Astronauts’ footprints stay on the moon forever,” Brandon whispers to Madeline on page 250, “because there’s no wind to blow them away.” What is he trying to say? How do you imagine Madeline reacts?

19. What purpose does the character of Sophie serve in the novel? What did you think she was up to? Did the reality surprise you?

20. On page 290, the art expert says of Brandon’s work, “His focus appears to be the instant before collapse-or surrender.” What does this mean, in terms of Brandon’s art and his life?

21. Discuss the final scene, and Brandon’s interaction with the swallows.

Jim Lynch lives with his family in Olympia, Washington. As a journalist, he has received the H. L. Mencken Award, among others. His first novel, The Highest Tide, won the Pacific Northwest Booksellers Award, appeared on several best-seller lists, and was adapted for the stage.

The Curious Incident of the Dog in the Night-Time by Mark Haddon; Budding Prospects by T. C. Boyle; Of Mice and Men by John Steinbeck; One Flew Over the Cuckoo’s Nest by Ken Kesey; The Great Gatsby by F. Scott Fitzgerald.
Learn More About Border Songs
print

The Good Son
Back to Top