The End of Manners Reader’s Guide 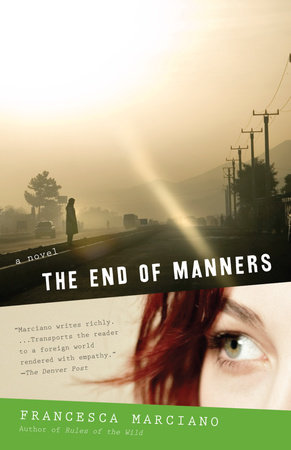 The End of Manners Reader’s Guide

“Marciano writes richly. . . . Transports the reader to a foreign world rendered with empathy.”
—The Denver Post

The introduction, questions, and suggestions for further reading that follow are designed to enliven your group’s discussion of Francesca Marciano’s The End of Manners. From the critically acclaimed author of Rules of the Wild, a thrilling, timely, and darkly funny story of friendship, human frailty, and war—and the role of outsiders in a country where they do not belong.

Maria Galante—rule-abiding, shy, a perfectionist—and larger-than-life journalist Imo Glass are on assignment in Afghanistan: Imo to interview girls who’ve attempted suicide rather than be married off to older men, Maria to photograph them. But in a culture in which women shroud their faces and suicide is a grave taboo, to photograph these women is to dishonor—and perhaps endanger—them. Maria and Imo must find their way among spies, arms dealers, and mercenaries, and through the back alleys of Kabul and into Pashtun villages, where the fragility of life stands out in bold relief. Before the assignment is over, Maria will have to decide if it’s more important to succeed at her work—and please Imo—or to follow her own moral compass.

1. Imo Glass and Maria Galante come from different countries and different cultural backgrounds; they have very different personalities and deal with situations differently. But in the face of the obstacles they encounter in Afghanistan, their similarities become more apparent. Compare and contrast the women. How are they more alike than they first appear to be? What are their strengths and weaknesses? Whom do you relate to most?

2. Why does Marciano choose to begin The End of Manners at the point when Imo and Maria are trying to leave Afghanistan? How do you think that this sets up the rest of the action in the book? Does knowing that Maria goes to Afghanistan at the outset of the story change the way that you view her equivocations about taking the photography assignment?

3. Francesca Marciano is also a screenwriter. What cinematic techniques, if any, did you notice in the novel? If The End of Manners were made into a film, whom would you like to see play Maria and Imo? Maria and Imo experience some surprisingly funny moments in Afghanistan. How does humor help them cope with life in a war zone? What other fictional works insert dark comedy into the theater of war? Is it daring for an author to use comedy or irony to address a world at war?

4. Hostile environment training is mandated by the insurance company. Are the lessons the Defenders try to teach useful in the real-world situations the characters encounter in Afghanistan? Or is the training simply an example of bureaucratic red tape? How do you connect the second and third sections of the novel?

5. Marciano has said that she “wanted to investigate in the book the relationship between men and women during a war. How does danger affect the roles? What happens to women in a place where the men hold the guns and the power?” Do the interactions that take place between Maria and Imo and the men in Babur’s Lodge, and the atmosphere at Babur’s Lodge, succeed in doing this? How do the men and women in the novel experience war differently?

6. Maria and Imo experience some surprisingly funny moments in Afghanistan. How does humor help them cope with life in a war zone? What other fictional works insert dark comedy into the theater of war? Is it daring for an author to use comedy or irony to address a world at war?

7. Imo says, “This seems to be the place where all good manners have come to an end. And it’s not a very good sign if you ask me. If there were any hope—if any of them actually believed this country could still make it and get back on its feet again—these people would still be engaged in some kind of civilized behavior. But could they care less? They know this is the last stop. After this there’s only chaos” [p. 132]. Do you agree with Imo? Why or why not? And why do you think Marciano chose to call her novel The End of Manners?

8. In the novel’s opening pages, we learn that Maria is a food photographer who would rather shoot soufflés than people. What is the significance, if any, of her attempt to return to photojournalism at this point in her life?

9. Pierre Le Clerc becomes Maria’s agent after one of her photos wins a World Press Photo award. Both he and Maria refer to this photo as “the Barbie doll picture" [p.11]. Why do they call it that, and what do you think the name implies? Why does Maria have such mixed feelings about the photo?

10. Compare and contrast Imo’s journalistic style to Jeremy’s, and also to Florence’s. Is it possible to write a story such as Imo’s from an outsider’s point of view? Can someone like Florence, who is so involved in the lives of her subjects, be objective? Has Florence really assimilated, or is she, as Imo believes, putting on an act?

11. When Maria is desperately ill in Kabul, she sends a text message to her ex-boyfriend, Carlo, an immunologist, after two years without communication. How are one’s vulnerabilities in a foreign place different from vulnerabilities at home? What do you think of Maria’s reaction to Carlo’s help, especially when she doesn’t respond to his final pleas? Has Afghanistan already changed her? In what ways? Would she have answered him at the beginning of the novel?

12. Hanif is a resourceful “fixer.” He finds Imo and Maria accommodations, obtains a translator, and takes the women to the Pashtun village, where there is no cell phone reception, even when his pregnant wife is in the hospital. Why does he put their needs first? What do you think of his decision not to stay by his wife’s side? Was it a mistake?

13. As Hanif takes Maria and Imo through a narrow gorge on their way to the Pashtun village, the women feel a heightened sense of danger. But on the way back, when the women feel safe, they find themselves faced with a real threat. Afterward, Imo admits that she should have been more cautious, heeded Jeremy’s warnings, and brought along the equipment he had loaned them. But would any of this have helped? Is there any way to feel secure in Afghanistan? Are you better protected—and able to experience a foreign place—when you feel secure and safe, or when you are constantly on guard?

14. Why is Maria unable to take a photo of Zuleya or of the women at the school but able to take the photo of Hanif’s dying wife? What do you make of Hanif’s statement to Maria, at the novel’s conclusion, about the photograph?

Francesca Marciano is the author of two previous novels and several screenplays, including Don’t Tell, which was nominated for an Academy Award in the category of Best Foreign-Language Film. She lives in Rome.

A Defiant Life
Back to Top