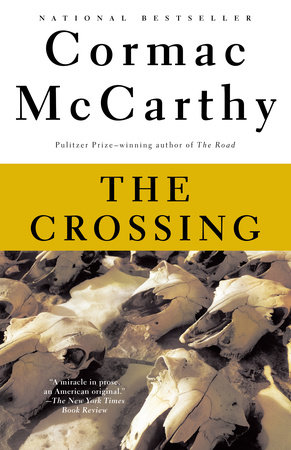 The author biography and questions that follow are designed to enhance your group’s reading and discussion of Cormac McCarthy’s The Crossing. We hope that they will provide you with new ways of looking at–and talking about–the latest novel by a writer who has been compared to Melville, Hemingway, and Faulkner. The Crossing is the second volume of the Border Trilogy that began with All the Pretty Horses. Like that earlier novel, The Crossing is also set in New Mexico and Mexico. The time period is somewhat earlier, between 1940 and 1944. The background, however, is the Mexican Revolution early in the century, whose campaigns and atrocities have by now become nearly legendary events.

On the day that Billy Parham leaves his father’s house to trap a wolf that has been preying on the herds, he crosses from the time we measure with calendars into an older, immeasurable dream-time–and into a world in which the only order is "that which death has put there [p. 45]. Indeed, on several occasions, Billy himself is unaware of even the month of the year. McCarthy’s achievement in The Crossing has been to render that timeless world in all its savagery and beauty. In doing so, he lays bare the mythic skeleton of the American West, telling a story of a ruinous quest for a dubious grail, undertaken by a hero who only dimly guesses what he is looking for and is cruelly diminished by the things he finds.

1. What is the significance of the book’s title?

2. Discuss the meaning of the observation: "The world was new each day for God so made it daily. Yet it contained within it all the evils as before" [p. 278]. How are these words applicable to the novel’s action?

3. Early in the book Boyd Parham is struck by the sight of his reflection in the eyes of an Indian who asks them for food. What he sees is not so much himself as a "cognate child…windowed away in another world where the red sun sank eternally" [p. 6]. What themes do this moment of mirroring and self-estrangement suggest?

4. How would you characterize Billy’s relationship with Boyd? Why does he return to Mexico to find out what happened to his brother? What else is he looking for?

5. Who do you think murdered the Parhams? Why didn’t Boyd try to escape when he had the chance?

6. The people in The Crossing are characterized by a kind of psychological opaqueness. Since we rarely know their direct thoughts, we must infer their motives from their words and actions, which often seem cryptic or irrational. How do we come to know these characters? What vision of human nature does their opaqueness suggest?

7. What role do animals play in this book? Why, for example, does Billy endure such great danger and hardship for the sake of a wolf? Do any of the characters he meets in Mexico share his feelings about animals?

8. The Crossing is a book of dreams and auguries. Early in the novel Boyd has a dream of people burning on a dry lake [p. 35]; Billy dreams he sees his father wandering lost in the desert and being swallowed by darkness [p. 112]. Later in his journey, Billy is taken in by Indians whose elder calls him "huerfano"–orphan [p. 134]–thus predicting the murder of his parents. What is the role of portents–both accurate and inaccurate–in this book?

9. The Crossing is an account of three journeys. The book is also divided into four sections. Why do you think McCarthy has divided
The Crossing in this asymmetrical fashion? Does he employ a similar structure elsewhere in this book? Is its overall structure similar to that of All the Pretty Horses?

10. What role does hospitality play in this book? Is there any relation between the novel’s scenes of hospitality and its moments of violence?

11. Is The Crossing a violent book? Why do you think the author has chosen to recount some of the worst instances of bloodshed (the slaughter of the opera company’s mule, the blinding of the rebel soldier) secondhand? At a time when graphic and gratuitous descriptions of mayhem are standard in much popular fiction for purposes of mere shock and titillation, has McCarthy succeeded in restoring to violence its ancient qualities of pity and terror? How has he managed this?

12. What things does Billy lose in the course of this novel? Which of these losses is voluntary?

13. The Crossing is a book about human beings and their relationship with God and, in particular, about their attempt to decipher divine justice. McCarthy explores this theme with Dostoyevskian eloquence in Billy’s conversations with the sexton of a ruined church [pp. 140-59] and a blind veteran of the Revolution [pp. 274-93]. What kind of God have these men come to understand? Is that God the same one that Billy and Boyd encounter?


14. In what ways does The Crossing resemble classic myths and fairy tales? How do Billy and Boyd Parham compare to the figures that Joseph Campbell describes in The Hero with a Thousand Faces?

Cormac McCarthy was born in Rhode Island in 1933 and spent most of his childhood near Knoxville, Tennessee. He served in the U.S. Air Force and later studied at the University of Tennessee. In 1976 he moved to El Paso, Texas, where he lives today. McCarthy’s fiction parallels his movement from the Southeast to the West–the first four novels being set in Tennessee, the last three in the Southwest and Mexico. The Orchard Keeper (1965) won the Faulkner Award for a first novel; it was followed by Outer Dark (1968), Child of God (1973), Suttree (1979), Blood Meridian (1985), and All the Pretty Horses, which won both the National Book Critics Circle Award and the National Book Award for fiction in 1992. The Crossing is McCarthy’s seventh novel and the second in his Border Trilogy. Cities of the Plain, his latest novel and the final volume in the Border Trilogy, will be published in June 1998.

McCarthy is also the recipient of a fellowship from the MacArthur Foundation, among other grants.
Learn More About The Crossing
print

To Paradise
Back to Top