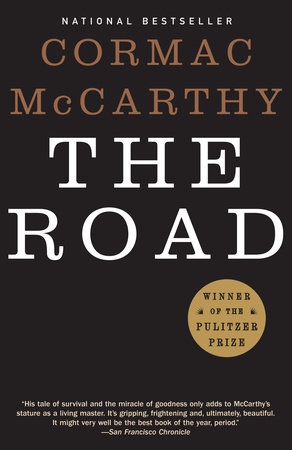 Winner of the 2007 Pulitzer Prize in Fiction

"His tale of survival and the miracle of goodness only adds to McCarthy’s stature as a living master. It’s gripping, frightening and, ultimately, beautiful. It might very well be the best book of the year, period." —San Francisco Chronicle

The introduction, discussion questions, suggestions for further reading, and author biography that follow are designed to stimulate your group’s discussion of The Road, the tender, harrowing new novel of unfailing hope amid epic devastation by acclaimed writer Cormac McCarthy.

Set in the smoking ashes of a postapocalyptic America, Cormac McCarthy’s The Road tells the story of a man and his son’s journey toward the sea and an uncertain salvation. The world they pass through is a ghastly vision of scorched countryside and blasted cities "held by cores of blackened looters who tunneled among the ruins and crawled from the rubble white of tooth and eye carrying charred and anonymous tins of food in nylon nets like shoppers in the commissaries of hell" [p. 181]. It is a starved world, all plant and animal life dead or dying, some of the few human survivors even eating each other alive.

The father and son move through the ruins searching for food and shelter, trying to keep safe from murderous, roving bands. They have only a pistol to defend themselves, the clothes they are wearing, a cart of scavenged food–and each other.

Awesome in the totality of its vision, The Road is an unflinching meditation on the worst and the best that we are capable of: ultimate destructiveness, desperate tenacity, and the tenderness that keeps two people alive in the face of total devastation.

1. Cormac McCarthy has an unmistakable prose style. What do you see as the most distinctive features of that style? How is the writing in The Road in some ways more like poetry than narrative prose?

2. Why do you think McCarthy has chosen not to give his characters names? How do the generic labels of "the man" and "the boy" affect the way in which readers relate to them?

3. How is McCarthy able to make the postapocalyptic world of The Road seem so real and utterly terrifying? Which descriptive passages are especially vivid and visceral in their depiction of this blasted landscape? What do you find to be the most horrifying features of this world and the survivors who inhabit it?

4. McCarthy doesn’t make explicit what kind of catastrophe has ruined the earth and destroyed human civilization, but what might be suggested by the many descriptions of a scorched landscape covered in ash? What is implied by the father’s statement that "On this road there are no godspoke men. They are gone and I am left and they have taken with them the world" [p. 32]?

5. As the father is dying, he tells his son he must go on in order to "carry the fire." When the boy asks if the fire is real, the father says, "It’s inside you. It was always there. I can see it" [p. 279]. What is this fire? Why is it so crucial that they not let it die?

6. McCarthy envisions a postapocalyptic world in which "murder was everywhere upon the land" and the earth would soon be "largely populated by men who would eat your children in front of your eyes" [p. 181]. How difficult or easy is it to imagine McCarthy’s nightmare vision actually happening? Do you think people would likely behave as they do in the novel, under the same circumstances? Does it now seem that human civilization is headed toward such an end?

7. The man and the boy think of themselves as the "good guys." In what ways are they like and unlike the "bad guys" they encounter? What do you think McCarthy is suggesting in the scenes in which the boy begs his father to be merciful to the strangers they encounter on the road? How is the boy able to retain his compassion–to be, as one reviewer put it, "compassion incarnate"?

8. The sardonic blind man named Ely who the man and boy encounter on the road tells the father that "There is no God and we are his prophets" [p. 170]. What does he mean by this? Why does the father say about his son, later in the same conversation, "What if I said that he’s a god?" [p. 172] Are we meant to see the son as a savior?

9. The Road takes the form of a classic journey story, a form that dates back to Homer’s Odyssey. To what destination are the man and the boy journeying? In what sense are they "pilgrims"? What, if any, is the symbolic significance of their journey?

10. McCarthy’s work often dramatizes the opposition between good and evil, with evil sometimes emerging triumphant. What does The Road ultimately suggest about good and evil? Which force seems to have greater power in the novel?

11. What makes the relationship between the boy and his father so powerful and poignant? What do they feel for each other? How do they maintain their affection for and faith in each other in such brutal conditions?

12. Why do you think McCarthy ends the novel with the image of trout in mountain streams before the end of the world: "In the deep glens where they lived all things were older than man and they hummed of mystery" [p. 287]. What is surprising about this ending? Does it provide closure, or does it prompt a rethinking of all that has come before? What does it suggest about what lies ahead?

Cormac McCarthy was born in Rhode Island. He attended the University of Tennessee in the early 1950s, and joined the U.S. Air Force, serving four years, two of them stationed in Alaska. McCarthy then returned to the university, where he published in the student literary magazine and won the Ingram-Merrill Award for creative writing in 1959 and 1960. McCarthy next went to Chicago, where he worked as an auto mechanic while writing his first novel, The Orchard Keeper.

The Orchard Keeper was published by Random House in 1965; McCarthy’s editor there was Albert Erskine, William Faulkner’s long-time editor. Before publication, McCarthy received a traveling fellowship from the American Academy of Arts and Letters, which he used to travel to Ireland. In 1966 he also received the Rockefeller Foundation Grant, with which he continued to tour Europe, settling on the island of Ibiza. Here, McCarthy completed revisions of his next novel, Outer Dark.

In 1967, McCarthy returned to the United States, moving to Tennessee. Outer Dark was published by Random House in 1968, and McCarthy received the Guggenheim Fellowship for Creative Writing in 1969. His next novel, Child of God, was published in 1973. From 1974 to 1975, McCarthy worked on the screenplay for a PBS film called The Gardener’s Son, which premiered in 1977. A revised version of the screenplay was later published by Ecco Press.

In the late 1970s, McCarthy moved to Texas, and in 1979 published his fourth novel, Suttree, a book that had occupied his writing life on and off for twenty years. He received a MacArthur Fellowship in 1981, and published his fifth novel, Blood Meridian, in 1985.

After the retirement of Albert Erskine, McCarthy moved from Random House to Alfred A. Knopf. All the Pretty Horses, the first volume of The Border Trilogy, was published by Knopf in 1992. It won both the National Book Award and the National Book Critics Circle Award and was later turned into a feature film. The Stonemason, a play that McCarthy had written in the mid-1970s and subsequently revised, was published by Ecco Press in 1994. Soon thereafter, Knopf released the second volume of The Border Trilogy, The Crossing; the third volume, Cities of the Plain, was published in 1998.

McCarthy’s next novel, No Country for Old Men was published in 2005. This was followed in 2006 by a novel in dramatic form, The Sunset Limited, originally performed by Steppenwolf Theatre Company of Chicago and published in paperback by Vintage Books. McCarthy’s most recent novel, The Road, was also published by Knopf in 2006.

Half of a Yellow Sun
Back to Top