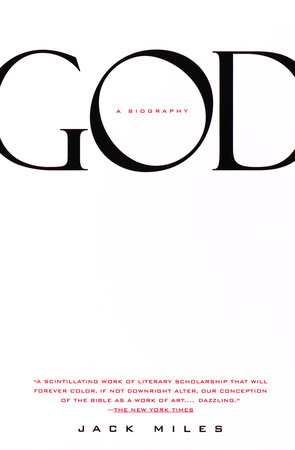 The discussion topics and author biography that follow are meant to enhance your
group’s reading of Jack Miles’s God: A Biography. We hope that they will provide you
with new ways of looking at–and talking about–a work that has been praised for its
audacious and erudite approach to a question that has preoccupied Jews and Christians,
believers and unbelievers, for close to six millennia: Who is God? Or, rather, what sort
of character is God?

Although Miles is a former Jesuit and has a formidable background in philosophy, archaeology, and Near Eastern languages, the purpose of his inquiry is not theological but literary. Using the Hebrew Bible, or Tanakh, as his text, Miles sets out to portray the unimaginably powerful and disturbingly contradictory
figure who is its protagonist. And what emerges is a character who possesses all the depths and ambiguities of Shakespeare’s Hamlet. To the devout, God is immutable, changeless throughout eternity. But a sequential reading of the Tanakh reveals a God who changes from book to book–and sometimes within the same book. In Genesis alone, he is by turns a creator and a destroyer; magnanimous and vengeful; a detached being who stands outside of history and a divine matchmaker who helps find a suitable bride for Isaac. In his analysis of subsequent books, Miles depicts God’s transformation from the liberator of Exodus to the demanding liege of Leviticus, Numbers, and Deuteronomy; from the conqueror of Joshua to the diplomat of Kings; from the father of Samuel to the reproachful wife of Haggai, Zechariah, and Malachi; from the implacable executioner of Isaiah to the consoling counselor of Psalms.

In most literature, characters are revealed through their interactions with other characters. So, too, God’s character unfolds through his relationships with human beings, the only creation he has made in
his own image. In the beginning, he seems to expect nothing from these images. Yet Adam’s disobedience moves him to fury, and the apostasy of the wandering Israelites drives him to slaughter thousands. He is all-powerful, yet he submits to the covenants he makes with his chosen people. He permits the blameless Job to be stripped of all he has and rebukes him when he cries out for an explanation. Yet these words are the last God utters in the Tanakh, and Miles interprets his subsequent silence as evidence that he can be shamed.

God: A Biography may be read as literary criticism of the highest order, a work that explicates the central character of the central text of the Western canon. Yet this fascinating, stylishly written book also holds up a mirror to us, and to our abiding notions of character. "We are all, in a way, immigrants from the past," Miles observes. "And just as an immigrant returning after many years to the land of his
birth may see his own face in the faces of strangers, so the modern, Western, secular reader may feel a tremor of self-recognition in the presence of the ancient protagonist of the Bible." [p. 4]

1. NOTE: Though God: A Biography quotes virtually all the biblical verses it comments on, a reading of it will be greatly enhanced if the reader can have a copy of the Bible at hand. The text from which Miles quotes is The Jewish Publication Society TANAKH, but any complete (that is, uncondensed) translation in which the verses follow the traditional numbering may be used.

KEYNOTE. Why might someone who does not believe in God nonetheless want to know something about God?

PRELUDE. Does God’s life have a beginning and an end in the Bible? Does the Bible tell us that God cannot change and does not grow, or is this an idea we have from elsewhere? Does the Bible tell us we cannot understand God? How is the order of God’s life different in the Christian Old Testament and the Jewish Tanakh? How does the way that historians confront conflict in God’s character differ from the way that literary critics confront it? [The discussion in this chapter is rather theoretical, and some groups may find the reading more enjoyable if they jump ahead to Chapter 3 and only refer back to Chapter 2 as objections arise that may be answered there.]

2. GENERATION. Creator: In the two tellings of creation, how does the character called "God" differ from the character called "the Lord"? Destroyer: God destroys the world before giving mankind any commandment to keep. The great flood cannot then be a punishment for disobedience. How else might it be explained? Creator/Destroyer: How is God’s covenant with Abraham a compromise within himself? How does the delayed birth and near-slaughter of Isaac betray God’s own mixed feelings?
Friend of the Family: How does God’s limited role in Genesis 2550 differ from his role
in Genesis 125?

3. INTERLUDE. What makes God Godlike? What are the consequences for God of having no past and of being the only one of his kind?

4. EXHILARATION. Liberator: Has God always been warlike? If not, why does he become warlike in Egypt? Lawgiver: Has God always been concerned with ethics, law, and worship? Why does he become concerned with such matters at Sinai? How do the lawgiver and the warrior in him relate? Liege: Compare and contrast the different emphases in the portrayals of God found in Leviticus, in Numbers, and in Deuteronomy.

5. TRIBULATION. Conqueror: What treatment does God instruct Joshua to mete out to the natives of Canaan? What does this tell us about God? Father: Has God been mankind’s father from the start of his story? If not, what is there about David that brings forth paternal feelings in God? How is the Absalom story a comment on the meaning of divine fatherhood? Arbiter: Has God been concerned to determine the fate of whole nations before sending Assyria and Babylon against his chosen people? What is it that first leads him to assume this role and this power?

7. TRANSFORMATION. Executioner: How are the oracles of the prophet Isaiah like the
letters of a great general published after a war? Judging from these "letters," what two attitudes conflict in God’s mind? Holy One: In the latter chapters of Isaiah, God speaks of himself as mysterious for the first time. Why only now? What is about himself that awes him?

8. INTERLUDE. Does God love? What evidence is there in the text that love was God’s motive for any of his actions before the post-exilic restoration of Israel to the promised land? If love is a discovery for God, how has he made the discovery?

9. RESTORATION. Wife: When God brings Israel back from exile, does he keep the promises he made through Isaiah? Counselor: The Psalms praise God for many reasons, but one of them stands out as both new and supremely important. What is that one? Guarantor: If the amalgam of divine personalities in God’s character includes a goddess as well as several gods, what is the goddess like? Where does she stand in the range of possible feminine personalities?

10. CONFRONTATION. Fiend: Was God within his rights to punish Job for no reason? At the end of their long struggle, does Job yield to God, or does God yield to Job? What is the meaning of God’s last words?

11. OCCULTATION. Sleeper: What effect does the Song of Songs produce coming mmediately after the Book of Job? Bystander: Naomi, a Jew, tells her Moabite daughter-in-law Ruth to worship a false god. Are we surprised? Recluse: As we read the passionate pleas of the Book of Lamentations, do we expect God to respond? What effect does the contrast between the expectations of he speaker and our own expectations produce? Puzzle: How anxious about God’s commands and God’s plans is the author of the Book of Ecclesiastes?

12. INCORPORATION. Absence: In the Book of Esther, when the Israelites face a genocidal
threat like the one they faced earlier in Pharaoh’s Egypt, how do they respond? Ancient of Days: On his last appearance in the Bible, how does God look? Scroll: Does God bring his people out of captivity and back to Zion, or is it vice versa: Do God’s people bring God out of captivity and back to Zion? Perpetual Round: Why does the Tanakh end as it does? Is its ending happy?

13. POSTLUDE: Does God lose interest? What did God want when he created mankind as his
image? As we have seen his life go by, which of his images was his most perfect image? At the end of his life, has God achieved his creative purpose? Has he got what he was after?

Jack Miles was born in Chicago, Illinois, in 1942. Raised a Roman Catholic, he entered the Society of Jesus (Jesuits) after high school and, as a Jesuit in training, spent two years at the Pontifical Gregorian University in Rome studying philosophy and another year studying Hebrew and archaeology at the Hebrew University in Jerusalem. In 1967, just after the Six Days War, he left Israel and went to Harvard University, where in 1971 he was awarded a doctorate in Near Eastern languages, specializing in Hebrew and in the Bible.

Miles was impatient with the heavily historical way the Bible was studied at Harvard (and at virtually all American universities). After only four years of full-time teaching, he gave up on academic life. For ten years, he worked in book publishing, first as an editor at Doubleday in New York and then as executive editor of the University of California Press. While living in Los Angeles, he began writing for the Los Angeles Times, where in 1985 he became literary editor and in 1991 was appointed to the newspaper’s prestigious editorial board.

Having left the Jesuits in 1970 and become an Episcopalian in 1980, Miles found to his surprise that questions he thought he had left behind, questions about the Bible and about the difficult character of God,
were crowding in on the political issues that it was his professional responsibility to address as a member of the Times editorial board.

In 1990, unable to keep these questions at bay any longer, he went on leave from the newspaper and began the book that in 1995 was published as GOD: A Biography. Shortly after the publication of this book, he left the Times to take the position he now holds as director of the Humanities Center
at the Claremont Graduate School in Claremont, California, a small town about an hour east of downtown Los Angeles.

Miles remains active as a journalist. He is a contributing editor at The Atlantic Monthly and his work appears frequently in both scholarly and popular publications, including The New York Times.
Learn More About God: A Biography
print

To Light a Fire on the Earth
John L. Allen, Jr. and Robert Barron

The Jewish Book of Why
Alfred J. Kolatch

The Gifts of the Jews
Thomas Cahill

A Pilgrimage to Eternity
Timothy Egan

God in the Qur’an
Jack Miles

The Name of God Is Mercy
Pope Francis

The Popes Against the Jews
David I. Kertzer

Encounters with Jesus
Timothy Keller
Back to Top