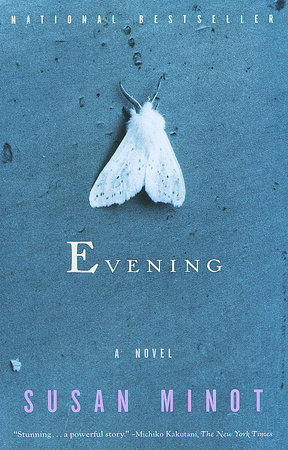 The questions, discussion topics and suggested reading list that follow are intended to enhance your group’s experience of reading Susan Minot’s Evening. We hope they will provide you with many new angles from which to approach this rich and poetic work by one of America’s most powerful and emotionally evocative novelists.

Ann Lord is dying of cancer. As she lies in bed, drifting in and out of consciousness, visited by friends and family members, we enter the twilight world of her memories, dreams, and regrets. Although she has had three husbands and five children, it is, above all, to one turbulent weekend that her mind keeps returning–and to one all-too-brief, never-to-be-forgotten romance. As she loses hold on present reality, Ann is drawn insistently back forty years to memories of the glorious Maine wedding of her friend Lila, where she met, fell in love with, and finally lost the one man who has ever meant anything to her; and where a fateful tragedy struck at the heart of their happy group of friends. Evening is a magnificent, richly-textured work of art about youth and age, passion and compromise. It triumphantly confirms Susan Minot’s place as one of the foremost, and most beloved, of American writers.

2. Minot gives the novel an epigraph from William Faulkner: "I give it to you not that you may remember time, but that you might forget it now and then for a moment and not spend all your breath trying to conquer it." How does this quotation relate to Evening? Does Ann try to "conquer" time?

4. Outsiders see Ann rather differently than she sees herself. Her daughter Constance, for instance, says that "her big thing" is "her stuff"; "That’s what she cared about, her house and her pictures and all her things" [p. 129]. Her daughters imply that she doesn’t laugh much [p. 32]. The doctor’s wife says Ann is "just like other women, maybe a little more stylish if you had to say something, but like other women" [p. 12]. What, if anything, does this elderly Ann have in common with the young, passionate Ann she still feels herself to be? What does this dichotomy imply about the differences between our inner selves and the outer person our friends and family see?

5. What might have attracted Ann to each of her three husbands? How did she come to view each of them as the years went by? How does the language in which Ann recalls her marriages differ from the language in which she recalls Harris, and what does this difference in language tell us about her feelings?

6. Ann wishes that she "might have been able to read the spirit within herself and would not have spent her life as if she were only halfway in it" [p. 137], then goes on to reflect that "her life had not been long enough for her to know the whole of herself, it had not been long enough or wide" [ibid]. In what ways has it not been wide enough? Does the fault for this lie with the cruelty of fate, or with Ann herself? If fault lies with Ann, what might she have done to make things different?

7. How would you describe each of Ann’s children? How has each been molded and shaped by his or her relationship with her? How does each of them behave toward her? Has the essential sadness of Ann’s life rubbed off on them?

8. How has Paul’s death affected Ann, Teddy, and the other children? Has it made them closer, or estranged them from one another? How, and at what times, is Ann compelled to remember Paul?

9. What sort of a person is Harris, really? What do you deduce about him and about his feelings, principles, and desires from his behavior, from what others say about him, and from the short section written from his point of view [p. 232-233]?

10. In one of Ann’s imaginary discussions with Harris, he says that she might have become a little "hard" [page 224]. Does this seem a fair assessment, judging from what you know of the older Ann? If so, how does this hardness manifest itself and why has she become hard?

11. How does Minot thematically link Buddy’s fate with the fate of Ann and Harris’s romance? In what ways is this particular weekend the turning point in Ann’s life, and how has Buddy’s fate intensified this process of change?

12. Does Ann ever feel responsible for what happened to Buddy? Does Harris? Does a sense of responsibility for this tragedy, or a lack of one, have any specific effect on Ann’s future life?

13. Ann conducts a number of imagined conversations with Harris in which the two meet again, for the first time in forty years. What sort of person is this elderly, imaginary Harris? Is he the sort of character you can imagine the young Harris growing into? How do you think the real sixty-five-year-old Harris might remember Ann?

14. If Ann and Harris had married, what sort of a life might they have had? Would they have been happy together? Might Ann have been unhappy and unfulfilled even with Harris?

Susan Minot was born in Boston, Massachusetts, and grew up in Manchester-by-the-Sea. She studied writing and painting at Brown University and received an MFA in writing from Columbia University. After publishing short stories in Grand Street and The New Yorker she was offered a contract for a novel by the legendary publisher Seymour Lawrence, who was to publish her next three books. His initial support for "a work of fiction" became Monkeys, nine stories which together make up a novel about the Vincent family, a New England family of seven children with a Catholic mother and Brahmin-background father. The stories cover twelve years in the life of the children, their mother’s "monkeys," during which a tragic accident alters their lives. It was published in a dozen countries and won the Prix Femina Etranger in France in l987. The novel was followed by Lust & Other Stories, a collection about wayward artists and journalists living in New York City, particularly about the relations between men and women in their twenties and thirties having difficulty coming together and difficulty breaking apart.

Her third book, Folly, set in the twenties and thirties in Boston, is a novel about a woman from a stifling Brahmin background whose choice of a husband is the determining factor in her life, and about the two different men she falls in love with. The challenge Minot set for herself was to write about a place and society which had always disturbed her and to try to imagine how a woman could stay in that world.

In l994 she was contacted by the director Bernardo Bertolucci with the idea of developing his idea for a screenplay about a young American girl visiting English expatriate artists living in Tuscany and having a "sentimental education." She had always been interested in cinema as a student and moviegoer. Stealing Beauty was a collaboration with the director. It was filmed in the summer of l995, north of Siena, where she was given the opportunity to continue polishing and learning on the set.

Evening is the story of a woman on her deathbed who amidst the delirium and images of her past full life relives a love affair she had forty years earlier, when at twenty-five she attended the wedding of her best friend on an island in Maine. As her children wait and tend to her, she remembers minutely the details of those three days when she met a man, a time which emerges from marriages and divorces and children as being the high point of her life. Evening has been optioned by Kennedy/Marshall at Disney, with Minot currently working on the adaptation for the screen.

Having spent too many years in one place, bent over paper writing, Minot, who has an apartment in New York City, finds herself traveling and away from home much of the time.
Learn More About Evening
print

State of Grace
Back to Top