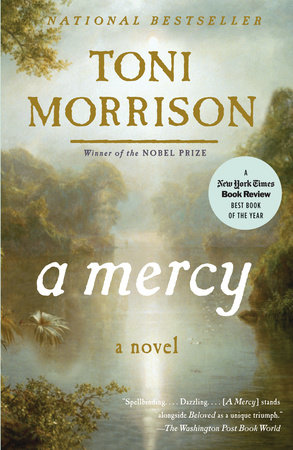 “Spellbinding. . . . Dazzling. . . . [A Mercy] stands alongside Beloved as a unique triumph.”
—The Washington Post Book World

The introduction, questions, and suggestions for further reading that follow are designed to enhance your group’s discussion of Pulitzer Prize winner and Nobel Laureate Toni Morrison’s searing new novel about the trauma of living in colonial America during the birth of the slave trade.

Set in the 1680s, in the early stages of the slave trade, A Mercy gives voice to a remarkable group of characters: Jacob, an Anglo-Dutch farmer, trader, and lender; his wife, Rebekka, newly arrived from England; their servant woman, the Native American Lina, whose tribe has been wiped out by smallpox; Florens, the slave girl he reluctantly accepts as payment for a bad loan; and the permanently shipwrecked Sorrow, daughter of a sea captain killed in a storm off the coast of the Carolinas. These characters take turns narrating the story, and their voices carry the physical and emotional scars of the struggles of their lives.

A Mercy is a visceral, intricately textured novel that takes readers right to the origins of America, a place where the seeds of the racial, religious, and class tensions that would later come to fruition in revolution and civil war were already being sown. It is a place where people are forced to make wrenching decisions. Jacob does not wish to take a slave as payment for a bad debt, but he feels it’s the best option available. Nor does he wish to traffic in slavery—he prides himself on his honest work—though he is willing to make huge profits off the slave labor of sugar plantations in Barbados. Florens’s mother does not want to part with her daughter, but feels that Florens will be better off with Jacob than with her own cruel master. Rebekka knows that even as a white woman, the only choices open to her are wife, servant, and prostitute. Florens, Lina, and Sorrow, who are servants, know that if both their master and mistress die, their already circumscribed choices will disappear completely and they will be fair game for anyone. This is a world in which women—white, black, and Native American—are especially vulnerable, literally at the mercy of the men who hold power over them.

But A Mercy is as much a novel of experience as ideas, and it is the vividness and immediacy of these characters that makes the novel so powerful. These are voices that have not been heard before, voices silenced first by cruelty and then by history.

In A Mercy they are free to speak at last.

1. Florens addresses her story to the blacksmith she loves and writes: "You can think what I tell you a confession, if you like, but one full of curiosities familiar only in dreams and during those moments when a dog’s profile plays in the steam of a kettle" [p. 3]. In what sense is her story a confession? What are the dreamlike "curiosities" it is filled with?

2. Florens writes to the blacksmith, "I am happy the world is breaking open for us, yet its newness trembles me" [p. 6], and later, "Now I am knowing that unlike with Senhor, priests are unloved here" [p. 8]. In what ways is Florens’s use of language strikingly eccentric and poetic? What does the way she speaks and writes reveal about who she is and what her experience has been?

3. What does A Mercy reveal about Colonial America that is startling and new? In what ways does Morrison give this period in our history an emotional depth that cannot be found in textbooks?

4. A Mercy is told primarily through the distinctive narrative voices of Florens, Lina, Jacob, Rebekka, Sorrow, and, lastly, Florens’s mother. What do these characters reveal about themselves through the way they speak? What are the advantages of such a multivocal narrative over one told through a single voice?

5. Jacob Vaark is reluctant to traffic in human flesh and determined to amass wealth honestly, without "trading his conscience for coin" [p. 32]. How does he justify making money from trading sugar produced by slave labor in Barbados? What larger point is Morrison making here?

6. How does Jacob’s attitude toward his slaves/workers differ from that of the farmer who owns Florens’s mother?

7. When Rebekka falls ill, Lina treats her with a mixture of herbs: devil’s bit, mugwort, Saint-John’s-wort, maidenhair, and periwinkle. She also considers "repeating some of the prayers she learned among the Presbyterians, but since none had saved Sir, she thought not" [p. 59]. What fundamental differences are suggested here between the practical, earth-based healing knowledge of Lina and the more ethereal prayers of the Presbyterians? What larger role does healing play in the novel?

8. Rebekka knows that even as a white woman, her prospects are limited to "servant, prostitute, wife, and although horrible stories were told about each of those careers, the last one seemed safest" [p. 91]. And Lina, Sorrow, and Florens know that if their mistress dies, "three unmastered women … out here, alone, belonging to no one, became wild game for anyone" [p. 68]. What does the novel as a whole reveal about the precarious position of women, European and African, free and enslaved, in late-seventeenth-century America?

9. Rebekka says she does not fear the violence in the colonies-the occasional skirmishes and uprisings-because it is so much less horrifying and pervasive than the violence in her home country of England. In what ways is "civilized" England more savage than "savage" America?

11. When Florens asks for shelter on her journey to find the blacksmith, she is taken in by a Christian widow and her apparently "possessed" daughter Jane, whose soul she is trying to save by whipping her. And Rebekka experiences religion, as practiced by her mother, as "a flame fueled by a wondrous hatred" [p. 86]. How are Christians depicted in the novel? How do they regard Florens, and black people generally?

12. Lina tells Florens, "We never shape the world… The world shapes us" [p. 83]. What does she mean? In what ways are the main characters in the novel more shaped by than shapers of the world they inhabit?

13. Why does Florens’s mother urge Jacob to take her? Why does she consider his doing so a mercy? What does her decision say about the conditions in which she and so many others like her were forced to live?

14. The sachem of Lina’s tribe says of the Europeans: "Cut loose from the earth’s soul, they insisted on purchase of its soil, and like all orphans they were insatiable. It was their destiny to chew up the world and spit out a horribleness that would destroy all primary peoples" [p. 64]. To what extent is this an accurate assessment? In what ways is A Mercy about the condition of being orphaned? What is the literal and symbolic significance of being orphaned or abandoned in the novel?

15. Why does Morrison choose to end the novel in the voice of Floren’ s mother? How does the ending alter or intensify all that has come before it?

16. Why is it important to have a visceral, emotional grasp of what life was like, especially for Africans, Native Americans, and women, in Colonial America? In what ways has American culture tried to forget or whitewash this history?

17. Did you see the stunning twist at the novel’s conclusion coming? If so, when and why? If not, why do you think it blindsided you?

Toni Morrison is the Robert F. Goheen Professor of Humanities, Emerita, at Princeton University. She has received the National Book Critics Circle Award and the Pulitzer Prize. In 1993 she was awarded the Nobel Prize in Literature. She lives in Rockland County, New York, and Princeton, New Jersey.

Shalimar the Clown
Back to Top