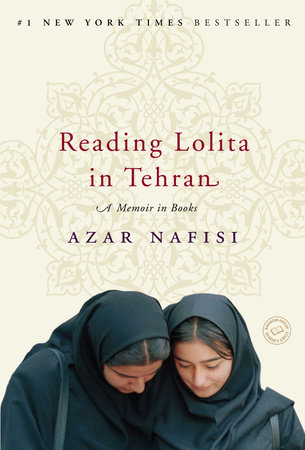 1. On her ﬁrst day teaching at the University of Tehran, Azar Naﬁsi began class with some questions: “What should ﬁction accomplish? Why should anyone read at all?” What are your answers to these questions? How does ﬁction force us to question what we often take for granted?

2. Yassi adores playing with words, particularly with Nabokov’s fanciful linguistic creation upsilamba (18). What does the word upsilamba mean to you?

3. In what ways had Ayatollah Khomeini “turned himself into a myth” for the people of Iran (246)? Discuss the recurrent theme of complicity in the book: the idea that the Ayatollah, the stern philosopher-king who limited freedoms and terrorized the innocent, “did to us what we allowed him to do” (28). To what extent are the supporters of a revolution responsible for its unintended results?

4. Compare attitudes toward the veil held by men, women and the government in the Islamic Republic of Iran. How was Naﬁsi’s grandmother’s choice to wear the chador marred by the political signiﬁcance it had gained (192)? Also, describe Mahshid’s conﬂicted feelings as a Muslim who already observed the veil but who nevertheless objected to its political enforcement.

5. In discussing the frame story of the murderous king in A Thousand and One Nights, Naﬁsi mentions three types of women who fell victim to his unreasonable rule (19). What is the relevance of this story for the women in Naﬁsi’s private class?

6. Explain what Naﬁsi means when she calls herself and her beliefs increasingly “irrelevant” in the Islamic Republic of Iran. Compare her way of dealing with this irrelevance to the self-imposed exile of the man she calls her “magician.” What can people who “lose their place in the world” do to survive, both physically and creatively?

7. During the Gatsby trial, Zarrin charges Mr. Nyazi with the inability to “distinguish ﬁction from reality” (128). How does Mr. Nyazi’s conﬂation of the ﬁctional and the real compare to the actions of the blind censor, who retains the authority to suppress performances when he cannot even see? Discuss the role of censorship in both authoritarian and democratic governments. Can you think of instances in the United States when art was censored for its “dangerous” impact upon society?

8. Naﬁsi writes: “It was not until I had reached home that I realized the true meaning of exile” (145). How do her conceptions of home conﬂict with those of her husband, Bijan, who is reluctant to leave Tehran? Also, compare Mahshid’s feeling that she “owes” something to Tehran to Mitra’s and Nassrin’s desires for freedom and escape. Discuss how the changing and often discordant inﬂuences of memory, family, safety, freedom, opportunity and duty deﬁne our sense of home and belonging.

9. Fanatics like Mr. Ghomi, Mr. Nyazi and Mr. Bahri consistently surprised Naﬁsi by displaying absolute hatred for Western literature—a reaction she describes as a “venom uncalled for in relation to works of ﬁction” (195). What are their motivations? Do you, like Naﬁsi, think that people like Mr. Ghomi attack because they are afraid of what they don’t understand? Why is ambiguity such a dangerous weapon to them?

10. The conﬁscation of one’s life by another is the root of Humbert’s sin in Lolita. Discuss how Khomeini likewise acted as a “solipsizer,” robbing individuals of their identities to promote total allegiance. What does Naﬁsi mean when she says that Sanaz, Nassrin, Azin and the rest of her girls are part of a “generation with no past” (76)?

11. Naﬁsi teaches that the novel is a sensual experience of another world, that it appeals to the reader’s capacity for compassion. Do you agree that “empathy is at the heart of the novel”? How has this book affected your understanding of the impact of the novel?

12. Naﬁsi’s account of life in the Islamic Republic transcends national and geographical boundaries. Discuss how the experience of censorship, fundamentalism and human rights, as well as the enjoyment of works of imagination and the desire for individual freedoms, may be similar in totalitarian societies and in democracies such as ours.

It is impossible to compose a reading list of all my favorite books, so I have listed only those that are pertinent to Reading Lolita– those works of ﬁction I referenced most while teaching English literature in Tehran. I have not included books I discuss in the text, otherwise they would have been part of this list.

Journey from the Land of No
Roya Hakakian

A Journal for Jordan
Dana Canedy

The Art of Leaving
Ayelet Tsabari

A Backpack, a Bear, and Eight Crates of Vodka
Lev Golinkin

Out of Place
Edward W. Said

Cut Me Loose
Leah Vincent
Back to Top