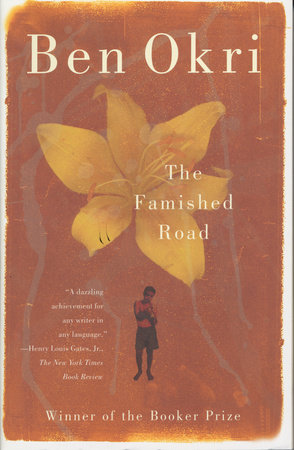 1. The Famished Road is a novel that sets out, not to tell a conventional narrative, but to map and explain an entire way of life and an entire world view — that of an Africa where myths are real, the dead are ever-present and the line between dream and reality is blurred. How important for Okri’s purposes is the particular artistic style he has chosen for the book, a style that might be characterised as magical realism? What would you say are the main characteristics of this style?

2. The spirit-child is a central myth in Nigerian folklore, one who dislikes "the amazing indifference of the Living in the midst of the simple beauties of the universe" (p.3). Why does Okri choose to have a spirit-child as the narrator of his novel? Why a child? What does this spirit-child tell us about "the heartlessness of human beings, all of whom are born blind, few of whom ever learn to see" (p.3)? What does it say about Okri’s own attitude towards spirituality and its relation to everyday life?

3. The Famished Road does not deal in conventional narrative sequence, and yet Okri is able to give the book a structure that allows the story to develop dynamically and purposefully. How does he do this? How does he create a balance between Azaro’s visions and the naturalistic description of the settlement, between action set-pieces and scenes of more quiet contemplation? Does this balance help the flow of the novel?

4. Despite being 500 pages long, the novel has only four main characters – Azaro, his mother and father, and Madam Koto the bar owner. Does this emphasis on only four characters prove a help or a hindrance in the development of the book’s story? How does Okri develop his individual characters? How important to the book’s success is Azaro’s relationship with his father?

5. Madame Koto undergoes a dramatic change in the course of the novel. Can you plot the development of that change? How far are the shifts in fortune that affect her and her bar, a metaphor for the wider changes affecting the country as a whole?

6. There are many instances in the book where Azaro’s description of his father blur the line between myth and reality. On page 199, for instance, "a gentle wind" becomes "a dark figure, towering but bowed", before solidifying into Azaro’s father. How does this affect our understanding of the character of Azaro’s father? What does Okri wish us to see in him?

7. It becomes apparent in the course of the book that Azaro and his parents live in a country that has just freed itself from colonisation. What does Okri make clear are the legacies of this new-found independence? How far does he agree with the woman in the crowd who says: "This Independence has brought only trouble" (p.169)?

8. "Our old people are very powerful in spirit. They have all kinds of powers … We are forgetting these powers. Now, all the power that people have is selfishness, money and politics" (p.70). How well does Azaro’s father’s description of the clash of old customers and the new politics of modernity fit with Okri’s own opinion of the changes taking place? Can you chart those changes? How important to Okri is ritual and tradition?

9. "The world is full of riddles that only the dead can answer" (p.75). What does Okri mean by this phrase? Is he endorsing the importance of tradition? What does the sentence imply about the role and meaning of the spirits trying to lure Azaro back to paradise?

10. The Famished Road, or "the road of our lives" (p.180), is an ever-present image in the novel. What do you understand the famished road to mean? Is there any similarity between Okri’s understanding of the famished road and, say, Ancient Greek ideas of fate?

11. Animals are ever-present in Azaro’s narrative, particularly in his visions. Which are the animals that most commonly appear in these dreams? What purpose do they fulfil? If they are acting simply as metaphors, can you guess what they signify?

12. In one vision, Azaro sees the trees "running away from human habitation" (p.243). How does Okri characterise the growing urbanisation that takes place in the book? What is his attitude to it?

13. White men hardly make an appearance in the book, and yet their legacy seems pervasive. "They are greedy," says Azaro’s mother. "They want to own the whole world and conquer the sun" (p.282). What references to white men can you find in the book? How is their legacy assessed by Okri?

14. Some critics have argued that the central strengths of The Famished Road lie less in Azaro’s fevered visions than in the book’s sympathetic portrayal of family ties and its naturalistic portrayal of ordinary African life. Do you judge Okri’s use of Azaro’s vision as successful or not?

15. "We are precious, and one day our suffering will turn into wonders of the earth" (p.338). "Our country is an abiku country. Like the spirit-child, it keeps coming and going. One day it will decide to remain" (p.478). Despite the suffering and corruption he depicts in the book, does Okri share the father’s final optimistic vision?

Of Love and Other Demons

You Know When the Men Are Gone
Back to Top