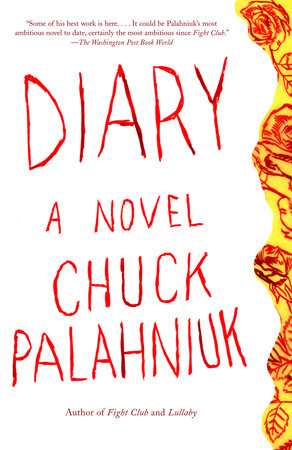 “Some of his best work is here. . . . It could be Palahniuk’s most ambitious novel to date, certainly the most ambitious since Fight Club.” —The Washington Post Book World

The introduction, discussion questions, suggested reading list, and author biography that follow are designed to enhance your group’s reading of Diary, Chuck Palahniuk’s latest tale from the dark side. We hope they will provide interesting ways of thinking and talking about this chilling, hallucinatory, and compulsively readable novel.

Diary is the eerie tale told by Misty Marie Wilmot, a waitress in a hotel, as her husband lies in a coma after a suicide attempt. Once she was an art student dreaming of creativity and freedom, but she hasn’t painted in years. With Peter in a hospital and his family’s fortune gone, Misty has to support her daughter and mother-in-law as she waits on tourists who visit the quaint but ruined Waytansea Island, where the Wilmot family has a two-hundred-year-old history. Two brilliant women painters, Maura Kincaid and Constance Burton, have also lived on the island and both died in mysterious circumstances long before Misty came to live there.

When Misty starts getting calls from people who say that rooms are missing in houses Peter has remodeled, things get more and more bizarre. It seems that before his suicide attempt, Peter had been walling off rooms in houses and spray-painting messages across their walls–messages like, “Set foot on the island and you will die” [p. 16]. Misty soon finds herself under the control of Peter’s innocuous-seeming mother and the family doctor, who have isolated her in a room in the hotel and forced her to replace her daily alcohol habit with some strange green pills. Locked up, blindfolded, with her leg in a cast, Misty is now painting as if her life depended on it–painting the best work of her life.

But Misty is being shadowed by a policeman from the mainland who is investigating the murder of Angel Delaporte, a photographer who took an interest in Peter’s hidden rooms. Meanwhile, Misty’s daughter Tabitha mysteriously drowns, and idyllic Waytansea Island is turning out to be full of bizarre legends and unreal visions that Misty is beginning to believe have something to do with her.

Diary is a dark, hilarious, and poignant act of storytelling from America’s favorite, most inventive nihilist.

1. The opening pages of the novel present a bewildering situation for the reader with their use of the narrating voice. Who is “you”? How soon do we learn who is speaking (or writing), and who is being spoken to? What is the effect of this confusion, and why might Palahniuk have chosen to begin this way? What are the characteristics of Misty’s diary style?

2. Misty grew up in a trailer park where “she never knew her dad, and maybe her mom worked two jobs. One at a shitty fiberglass insulation factory, one slopping food in a hospital cafeteria. Of course, this kid dreams of a place like this island, where nobody works except to keep house and pick wild blueberries and beachcomb” [p. 9]. Why does she poke fun at her own background and her dreams of a perfect place like the island?

3. As she works in the Wood and Gold Dining Room, Misty calls herself “queen of the slaves” [p. 17] and is disgusted by the rich summer people who have destroyed the island. When she sees a message written on the underside of table six—“Don’t let them trick you again” [p. 22]—she doesn’t understand what it means. How do the book’s early chapters create suspense, and how do they create a sense of empathy for Misty?

4. What details contribute to the reader’s perception of Peter’s mother? Why is she both laughable and sinister?

5. Misty tells herself after marrying Peter, “It wasn’t a career as an artist that she wanted. What she really wanted, all along, was the house, the family, the peace” [p. 13]. Does the novel suggest that Misty has been sucked into a role of feminine domesticity at the expense of her desire to be an artist? Or does it suggest that there was never any other destiny available to Misty than to be the chosen vehicle for the island’s salvation?

6. Diary is full of scrawled messages and urgent attempts to communicate. Some are left by Peter Wilmot, some by Maura Kincaid, and some by Constance Burton. Why are these messages so difficult to understand? Why did Peter leave his messages in sealed rooms? Does Misty lack the knowledge essential to interpreting them? How does she figure out what is going on, and how does her understanding influence her actions?

7. How has Peter described Misty’s body? How does Misty describe her own body? Why is her physicality important to the story, and why does Palahniuk use such unflinching details about bodies and their functions? What do these details contribute to the atmosphere of the novel?

8. Why does Misty allow her drinking habit to be replaced by the little green pills, even when they give her terrible headaches? How might she have resisted the doctor and her mother-in-law?

9. With Misty’s descriptions of the work that was considered cool in art school, is Palahniuk delivering a critique of contemporary ideas about edgy, ironic art [pp. 75–76, 79–80]? Is he suggesting that art like Misty’s, which is a direct expression of her own desire, is of greater value? Or is he also criticizing the art of the idealized landscape and the perfect world–“the wish list of a white trash girl; big houses, church weddings, picnics on the beach”—as being trite?

10. Who is staging the “reality” that Misty is experiencing? What is being staged, and what is she imagining? Is there any way to explain the events that take place in this story? Is the world of the novel meant to comment on reality? If so, how?

11. Does Misty love Peter? How hurt is she by what she has found out about his true feelings for her and by the fact that he was simply using her to save the island? How interesting is it that Peter is gay and has been pretending to be straight in order to do his parents’ bidding?

12. Is Misty, in the end, heroic in her attempts to stop the violence on the island and save her daughter? Or is she too passive, allowing herself simply to be used by Peter’s parents? To what degree is Peter also a disposable element in his parents’ plot?

13. Peter’s father Harrow tells Misty how she fits into the island legend: “She’s doomed to fame. Cursed with talent. Life after life. She’s been Giotto di Bondone, then Michelangelo, then Jan Vermeer. . . . She has always been an artist. She will always be an artist” [p. 242]. What do the events related on pages 242–45 reveal about Misty’s identity, and does Misty herself accept these statements?

14. On page 257 we’re told that Tabbi is “hugging the ashes of Grace and Harrow.” Why do Peter’s parents die in the fire? Are they really dead?

15. How does Misty react when she learns of Tabitha’s role in the hotel fire? How surprising are the final few pages of the novel, and which revelations are most shocking?

16. How does Misty hope to change the future by sending her diary to Chuck Palahniuk [p. 261]?

17. A reviewer for Newsday wrote, “Palahniuk is one of the freshest, most intriguing voices to appear in a long time.” Which aspects of his style or voice contribute to this sense of his uniqueness?

18. If you have read any of Chuck Palahniuk’s previous novels, how does Diary compare to them? What concerns, obsessions, or themes of the author are continued or revisited here?

Born in 1961, Chuck Palahniuk has worked as a diesel mechanic and a journalist as well as a writer of fiction. His novels are the bestselling Lullaby and Fight Club (which was made into a film by director David Fincher), Survivor, Invisible Monsters, and Choke. He lives in Portland, Oregon.

You Should Have Left
Back to Top