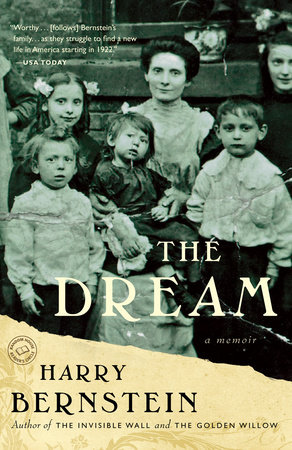 2. How was Ava able to soldier on with a shred of optimism during difficult times? Do you think she truly believed that her dreams would come true? When did the dreams bolster her hope, and when did they cease to help?

3. What do you think contributed to Yankel’s behavior toward his family? If he hadn’t needed to work from the age of seven, began drinking as a child, or had fit a different role in his own family, might he have been a more loving father? Was he a product of nature or nurture?

4. Soon after the Bernsteins receive their tickets to America from the anonymous benefactor, Harry’s mother says, “ ‘We can’t go to America looking like beggars.’ . . . She would remember those words later and the irony they contained” (page 18). Later, when she finds out that Harry’s grandfather is a panhandler, she is horrified that he takes money from others. Why, then, was she so willing to ask her husband’s family for the tickets to America? Discuss the many different definitions of charity in The Dream.

5. Harry can’t understand why his mother cajoles his father to come with them to America, especially since he was hoping to leave his father behind once and for all. What were her motives? What might their lives have been like if he stayed in England?

6. Yankel’s story of desertion is the reason Ada falls in love with him, and the reason she cannot abandon him. Do you believe, as Harry’s grandfather insists, that Yankel refused to leave Poland as a boy, or do you think his mother left him behind? Is this story the sole reason Ada gave him so many chances, or do you think some part of her still loved him?

7. “I felt with a sinking sensation that we were back to what we had come from” (page 38). Had the dream bubble Harry refers to in the beginning of the memoir already burst, so soon after they arrived in America? Have you experienced a moment like this, when you got what you had hoped for, but found that a better life was still out of reach?

8. Why does Harry’s grandfather seem to have such fortitude against hardship? How does he protect himself emotionally in a way that much of the rest of the family cannot? Do you have a family member who seems remarkably able to roll with the punches?

9. When Harry finds out that his grandfather has died, he thinks, “What a strange man he was . . . and how little we really knew of him, of the depth of his generosity, the sense of responsibility to his family, the goodness that was in him” (page 238). Why did Harry’s grandfather continue to send money to the children who looked down on him, even after he wasn’t invited to the wedding he paid for?

10. Harry’s grandfather believed that he tricked Ada and pushed her into marrying Yankel. Do you think his financial assistance atoned for his lie about Ada’s first love, Samuel? Like Ada, have you ever experienced a moment that so completely changed the course of your life?

11. Harry’s grandfather gives him a free ticket to a dance, and that is where he meets Ruby, the love of his life. Do you believe in fate? Serendipity? Love at first sight?

12. “I was not angry with my mother. I realized how dependent she was on me, how much all her hopes and what was left of her dreams were fastened on me, and–perhaps most important– how much protection I gave her against my father. And now there was Ruby” (page 208). Harry married Ruby despite his mother’s fear of losing him. How often must we sacrifice the contentment of others to improve our own lives? Have you ever done so? Was it worth it?

13. Who do you most admire in The Dream? Why? Is there someone in your own family who is like this character?

Learn More About The Dream
print

In the Days of Rain

Rose: My Life in Service to Lady Astor

Running with the Bulls
Back to Top