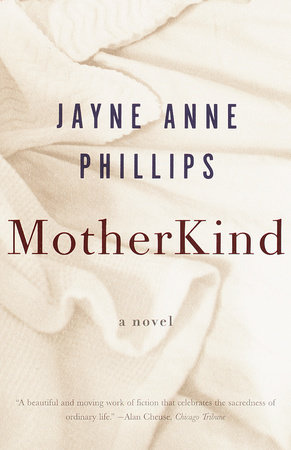 The questions, discussion topics, and author biography that follow are designed to enhance your group’s reading and discussion of Jayne Anne Phillips’s MotherKind. We hope they will give you a number of interesting angles from which to consider this remarkable and moving novel from the acclaimed author of Shelter and Machine Dreams.

At thirty-one, Kate Tateman is accustomed to a life of solitude and freedom, writing and travel. When the novel opens, she has bought a house with Matt, a doctor who is going through a divorce. Kate is pregnant with Matt’s child and coping with her fragile relationship with his sons, Sam and Jonah, but her life becomes even more complex when her mother, Katherine, suffering from terminal lung cancer, comes to live with them.

With the birth of her son, Alexander, Kate’s situation intensifies. Poised between a growing infant and a dying mother who are both dependent upon her care and love, she struggles to cope with the demands of each. At the same time, she tries to accept the shrinking of her world to the realm of the purely domestic, as she becomes a woman wholly engaged in service to others.

From the beginning of her career, Jayne Anne Phillips has been recognized as a brilliantly sensitive analyst of the intricate lives of women and families in contemporary America. It is the triumph of MotherKind that Kate’s complex experience of being and losing a mother is so deeply and luminously portrayed.

1. Shortly before she gives birth, Kate "felt magical and fierce, as though these were the qualities her son would require of her. Enormous, she was girded for battle" [p. 19]. Soon after Alexander’s birth, she feels exhausted, feverish with mastitis, her emotions surging uncontrollably with the hormonal changes in her body. How does Kate’s situation illustrate the new mother’s parallel experience of power and vulnerability?

2. On page 106 we learn that before Kate found out about her mother’s cancer, she had planned to return to Nepal and live for a while in a Buddhist monastery. How does this fit with her character? Kate refers to America as a country "descended from Puritans who did not accept darkness" [p. 5]. What does she mean? How does the Buddhist concept of "namaste" [pp. 4—5] fit with the book’s exploration of the relationship between death and life?

3. Phillips has chosen to use flashbacks as discrete sections within the ongoing chronology of the novel. What is the effect of this structure? What is Phillips saying about the role of memory in daily life?

4. Thinking of the pride some women take in their diamond engagement rings, Kate thinks, "It was painful to see the things women did" [p. 19]. Does Kate’s rejection of conventional values give her a useful perspective on the events now taking place in her life? How does her experience of traveling in India, Sri Lanka, and Nepal affect the way she sees American culture?

5. Throughout the novel, Kate struggles with the role of stepmother to two active little boys who miss full-time access to their dad. Kate sees the freedom with which Sam and Jonah approach public spaces as a stark contrast to the way she herself was raised: "The wild boys. . . . They made it seem she and her brothers had grown up in a series of careful boxes" [p. 18]. What else does Kate learn about herself through Sam and Jonah, and how does her relationship with them change as MotherKind progresses?

6. Why is Kate so drawn to the Millennium Falcon, the toy space capsule from Star Wars [p. 77]? Judging from Kate’s thoughts on pages 82 and 83, what is its symbolic meaning for her, and why does she buy it for her son? What is the link between the space capsule and the old-fashioned pram she buys at the same time?

7. Matt calls Kate "the Queen of Safety." What does he mean by this? How do Kate’s efforts to keep her loved ones safe resound within the larger context of the novel’s themes of life, death, and the passage of time?

8. How significant is the fact that Kate is named after her mother? Why do Kate’s brothers play such a small role in the story? Is the mother-daughter bond portrayed here an unusually strong one?

9. Home means something very different for Kate than it does for her parents. For her father, home is not where you live, but where you come from. Why does Kate believe that where she came from is less relevant to her than the present she has created? Is this a generational difference, or a philosophical one? Is home something we can carry within us, rather than merely a place?

10. "Ravenous, Kate knew, this need to birth babies, to hold one’s child. The fact was, birth dwarfed sex, swept sex before it. . . . For years, she’d avoided babies, which was easy, because most women she knew didn’t have them. Most women thought they were looking for men, not babies. Kate thought now that they were wrong: they were all looking for babies, even those who said they didn’t want children" [p. 117]. Is womankind synonymous with motherkind? Is there a "kind" of woman who is motherly, who is destined for motherhood for her own fulfillment? Are all women members of "motherkind," whether they choose to acknowledge it or not?

11. What is the significance of the near disaster that occurs when Jonah takes the boat into the water by himself? What does the episode mean in terms of Kate’s ongoing effort to encourage Matt’s sons to love and trust her?

12. Katherine is a rigorously independent woman. Disappointed with her marriage, she has forged a life that is free of romantic attachments. When Kate’s father, Waylon, comes to visit, how does Kate’s vision of her parents’ marriage change? Does Katherine underestimate Waylon? What does Kate mean when she says, "My father lives in the unspoken . . . and when I’m with him I live there too" [p. 181]?

13. Jayne Anne Phillips has said, "The compelling reason for writing, the risk the writer takes in becoming the characters, has to spring from a truth the writer has transformed and deepened. Any family a writer invents is informed in some way by what the writer lived as a child, sibling, parent, or whatever. We learn about family within family. There may be very basic differences between what writers write, and what they lived, but the understanding of intimacy and loss springs directly from what we experience." How do you see this statement reflected in the story she tells in MotherKind?

14. How would you describe the ethical, or moral, assumptions behind Kate’s decision to care for her mother until the end of her life? What does Kate admire most about the visiting nurses who specialize in tending the dying?

15. What is the significance of holidays, shared meals, and gatherings for Kate? What is the importance of Camille as friend and neighbor, and how are Kate and Camille similar? What are these women trying to create within the framework of domesticity?

16. Is it surprising that the relationship between Camille and Landon ends as it does? Why has Phillips chosen to include them in the story?

17. How does Phillips manage to convey the deep springs of the relationship between Katherine and Kate, and which episodes of MotherKind express this intimacy most powerfully? Why does she choose not to describe Katherine’s death, and what is the effect of this choice upon the novel’s ending?

18. While Kate muses on her mother’s illness as both terminal and terminus, the third-person narrator states, "Words are so often maligned by their meanings; Kate conceives of words as implements of pure energy, washed, infused, shadowed or illumined by all they carry in endless combination with one another" [p. 4]. Does this belief carry over into Phillips’s prose style in this novel? Kate is a poet—does her poetic impulse affect the way her story is told?

Born in Buckhannon, West Virginia, Jayne Anne Phillips is the author of two novels, Shelter (1994) and Machine Dreams (1984), and two collections of widely anthologized stories, Fast Lanes (1987) and Black Tickets (1979). She is the recipient of a Guggen-heim Fellowship, two National Endowment for the Arts Fellowships, and a Bunting Fellowship. She has been awarded the Sue Kaufman Prize for First Fiction (1980) and an Academy Award in Literature (1997) by the American Academy of Arts and Letters. Her work has appeared most recently in Granta, Harper’s, DoubleTake, and The Norton Anthology of Contemporary Fiction. She is currently Writer in Residence at Brandeis University.

Isabelle the Navigator
Back to Top