My Home Is Far Away Reader’s Guide 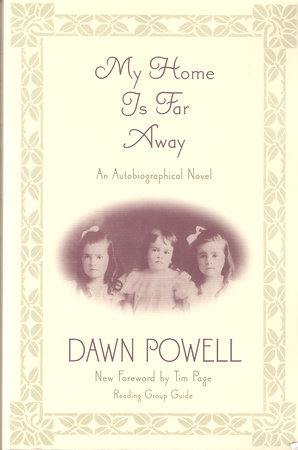 My Home Is Far Away Reader’s Guide

print
My Home Is Far Away Reader’s Guide

1. In his foreword Tim Page writes: “My Home Is Far Away is one of the very few examples of a book written for adults, with an adult command of the language, that maintains the vantage point of a hungry, serious child throughout. It might be likened to a memoir that has been penned not with the usual tranquility of distance but rather with the sense that everything happening to the characters is happening right now, without any promise of eventual escape, without any assurance that childhood, too, shall pass away.” Do you agree that this unique approach by the author gives My Home Is Far Away a certain power? Can you think of some examples where Powell’s adult command of the language combined with a child’s sense of immediacy had an especially strong impact on you?

2. Like most of Dawn Powell’s books, My Home is Far Away did not sell well when it was first published; it went out of print quickly, remained out of print for three generations, and did not receive major critical acclaim until long after Powell’s death in 1965. The New York Times Book Review did not hail it “one of the permanent masterpieces of childhood” until 1995, and Newsday didn’t write “a book this good can be only one thing: a classic” until 2004. Numerous reviewers have said that Powell was a writer ahead of her time. What aspects of Powell’s approach in My Home is Far Away – a book set during the early 1900s and published in 1944 – seem more in line with the sensibilities and conventions of our time than of Powell’s?

3. Chapter 28 (p. 241) begins: “ ‘I feel sorry for her,’ Florrie said one day, in troubled tones.” She’s speaking of the girls’ stepmother, Idah Hawkins. Do you feel sorry for Idah? If so, in what ways and why? To what extent is the girls’ father, Harry Willard, ultimately responsible for the cruelty they suffer at Idah’s hands?

4. Even when their mother, Daisy, was still alive, a pattern had started to develop of the girls being shunted off to the care of others in part so they could have proper shelter and sustenance. The pattern of course accelerated after Daisy’s death. What changes have taken place with respect to safety nets in our society to make it less likely that such patterns of neglect and displacement can occur in a child’s life? Have any informal safety nets that were once routinely provided by family and community in the early twentieth century disappeared from today’s society? Discuss the drawbacks and benefits of the way things were then and the way they are now.

5. Just like Marcia Willard, her counterpart in the novel, Powell attended school only intermittently during her early years. Yet she went on to work her way through college and to support herself throughout her adult life as a writer. No doubt she possessed uncommon talent and demonstrated rare perseverance. But she also grew up in an era when reading and literature were central to the culture. Are the chances less or greater that a child born today with natural gifts and environmental circumstances similar to Marcia’s will grow up to be a “success”? Would a child with Marcia’s storytelling talents be as likely to become a writer today? If not, what other outlets might she pursue for her talents?

6. What are your feelings toward Harry Willard? Is he truly well intended or just a charismatic phony who sets out to take advantage of people? Do you know any Harry Willards? Discuss how well Powell captures this type of person. Also, discuss the balance Powell has to strike to portray Harry through the eyes of his loving daughters while at the same time presenting him to the reader as a fully formed adult character.

7. In her famous diaries, Powell wrote of My Home Is Far Away: “My first feeling was one of queasiness over the initial establishment of a distinctly autobiographical flavor, but after a while the characters become wholly fictional, increasingly round and with the full reality that only created characters have.” What are some of the hallmarks of the art of novel writing exemplified by My Home Is Far Away but typically missing from memoirs? When a book, such as a memoir, is labeled as nonfiction, how “true” do you think it should be? What genre do you prefer: the memoir, where the writer is supposed to be as factually accurate as possible, or the novel based on personal experience, where the author is at liberty to invent, alter, or delete facts for the sake of art and the achievement of a higher or more universal truth?

8. When Scribner’s first published My Home Is Far Away in 1944 it promoted the book with an advertisement that read:

The scene is Ohio in the early 1900s; the main characters are the members of the happy-go-lucky Willard family – always on the move, always seeking the home that is always far away. You’ll laugh with the Willards and sympathize with them in their moments of tragedy. They’re a family you’ll like – especially Marcia, the “middle one.” Meet them today. You’ll be glad you did.

Do you think the book would have sold better or worse if its publisher had been more forthright about the story it contains and the verities about human nature it reveals? Can you guess at some of the reasons Powell called her book My Home Is Far Away?

Late in life, out of luck and fashion, Henry James predicted a day when all of his neglected novels would kick off their headstones, one after another. As the twentieth century came to an end, the works of Dawn Powell managed the same magnificent task.
When Powell died in 1965, virtually all her books were out of print. Not a single historical survey of American literature mentioned her, even in passing. And so she slept, seemingly destined to be forgotten – or, to put it more exactly, never to be remembered.
How things have changed! Twelve of Powell’s novels have now been reissued, along with editions of her plays, diaries, letters, and short stories. She has joined the Library of America, admitted to the illustrious company of Ralph Waldo Emerson, Henry Adams, Frederick Douglass, and Edith Wharton. She is taught in college and read with delight on vacation. For the contemporary poet and novelist Lisa Zeidner, writing in The New York Times Book Review, Powell “is wittier than Dorothy Parker, dissects the rich better than F. Scott Fitzgerald, is more plaintive than Willa Cather in her evocation of the heartland, and has a more supple control of satirical voice than Evelyn Waugh.” For his part, Gore Vidal offered a simple reason for Powell’s sudden popularity: “We are catching up to her.”

Tim Page, Powell’s biographer, from his new foreword to My Home Is Far Away,
Dawn Powell was born in Mt. Gilead, Ohio, on November 28, 1896, the second of three daughters. Her father was a traveling salesman, and her mother died a few days after Dawn turned seven. After enduring great cruelty at the hands of her stepmother, Dawn ran away at the age of thirteen and eventually arrived at the home of her maternal aunt, who served hot meals to travelers emerging from the train station across the street. Dawn worked her way through college and made it to New York. There she married a young advertising executive and had one child, a boy who suffered from autism, then an unknown condition.
Powell referred to herself as a “permanent visitor” in her adopted Manhattan and brought to her writing a perspective gained from her upbringing in Middle America. She knew many of the great writers of her time, and Diana Trilling famously said it was Dawn “who really says the funny things for which Dorothy Parker gets credit.” Ernest Hemingway called her his “favorite living writer.” She was one of America’s great novelists, and yet when she died in 1965 she was buried in an unmarked grave in New York’s Potter’s Field.

Her books live, and with these newly designed editions, with their reading group guides inside, more people than ever before will be able to hear Dawn’s distinctive voice.
Learn More About My Home Is Far Away
print

Mrs. Somebody Somebody
Tracy Winn

The Sunnier Side and Other Stories
Charles Jackson

As Birds Bring Forth the Sun and Other Stories
Alistair MacLeod

When We Were Wolves
Jon Billman

Another You
Ann Beattie

The Woman Who Wouldn’t
Gene Wilder
Back to Top