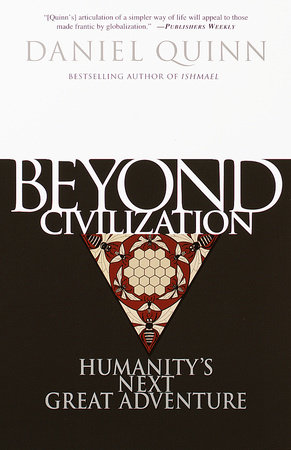 One of our fundamental cultural beliefs is this, that civilization must continue at any cost and must not be abandoned under any circumstances. Implicit in this belief is another: that civilization is humanity’s ultimate invention and can never be surpassed.

Both of these beliefs exemplify the cultural fallacy that one’s beliefs are not merely expressions of one’s culture but are intrinsic to the human mind. The effect of this fallacy is that it’s almost impossible for the people of our culture to entertain the idea that there could be any invention beyond civilization. Civilization is the end, the very last and unsurpassable human social development.

Quinn’s book challenges these beliefs and leads the way into new territory beyond civilization. This territory isn’t a geographical space (is not, for example, somewhere you go and start a commune). It’s an unexplored cultural, social, and economic space "on the other side" of civilization’s hierarchical organization. The journey to this new territory doesn’t represent a way to overturn civilization’s hierarchy but rather a way to leave it behind. It’s an escape route to a future where ordinary people can reclaim dignity, joy, equality, and self-reliance. The escape route is hidden, of course, or it would have been found before now. As Quinn shows, it’s hidden where all the greatest
secrets are hidden — in plain sight.

1. What does Quinn gain by starting with a fable? What effect did reading this fable have on you? The fable is a mixture of realistic elements and fabulous elements. Which are which? What events and stages in our cultural development correspond to the events of the fable? How do you think the leaders of our society would respond to the challenge posed by the masses in this fable?

2. Do you agree that "there’s nothing the people of our culture want more than change"?

4. Choose for discussion an example of some bad thing (for example, school shootings like the Columbine High School tragedy). Consider various ways the bad thing might be stopped. Then consider instead how you’d like things to be and how you might go about making them that way. Which way of discussing the matter seems more productive?

5. The term "manifest destiny" was coined by historian John Louis O’Sullivan, who wrote: "The expansive future is our arena. We are entering on its untrodden space with the truth of God in our minds, beneficent objects in our hearts, and with a clear conscience unsullied by the past. We are the nation of human progress, and who will, what can, set limits on our onward march?" Discuss these ideas in the terms presented in "Conspicuous success, invisible source" on page 13.

6. Put together a list of memes (for example, relating to success) that you grew up with. How do these memes compare with the ones your parents grew up with and the ones your children are growing up with? What memes relevant to family life were reinforced by television fare in the fifties? How do these compare to memes being reinforced by television fare in the nineties?

7. A well-known folk song announces that "This land is your land, this land is my land…this land was made for you and me." Has your reading of these "patriotic" sentiments been colored by the ideas expressed "Holy work" on page 50?

10. Did such a thing as running off to join the circus ever cross your mind when you were young? If so, can you remember and describe what the attraction was for you?

11. Quinn describes three ways the people of our culture have traditionally dealt with their place within the hierarchy. They’ve justified it as karmic (as something they deserve); they’ve transcended it by looking for justice in a better existence after death; and they’ve worked to overturn it by revolution. What are your own strategies for dealing with the discontents of the hierarchical life (if you experience any)?

14. Quinn says that in Houston he and his wife have upped their standard of living tenfold over the one they enjoyed in Madrid, but adds that what has not been upped is their "overall feeling of contentment and well-being." Most of us experience changes in standards of living in the course of our lives. Discuss the effect such experiences have had on you.

15. Quinn says he wasn’t surprised to hear from many youngsters who feel "just like Jeffrey." Are there any such in your own personal experience?

16. Quinn characterizes our "overriding response to failure" as: If it didn’t work last year, do it AGAIN this year (and if possible do it MORE). What didn’t work last year in our "war against crime" or in our effort to "fix the schools," is exactly what we’ll do this year, predictably spending MORE on it. Can you give any examples of this from your own sphere of experience — at work, for example?

17. As you began to read Quinn’s proposals aimed at "helping the homeless succeed while being homeless," what were your initial responses? Did these responses change or remain the same as you read on?

18. Do you think Quinn makes a realistic assessment of the likely "objections" to his proposals for the homeless (page 135)?

19. Among Quinn’s examples of modern-day, non-ethnic tribes is that of team of con-artists. Do you think this example was chosen to make some subtle moral point about tribalism?

20. Have you encountered any businesses that operate in a tribal way?

21. In his discussion of the Columbine massacre, does it seem to you that Quinn is offering an excuse for killers Eric Harris and Dylan Klebold?

22. Back in the 1960’s Timothy Leary set off an explosion of "flower power" with this famous formula: "Tune in, turn on, drop out." In deliberate juxtaposition to this formula, Quinn has elsewhere articulated the formula presented in this book as: "Walk away, go tribal, think incremental." Leary’s formula led to a dead end. Is Quinn’s more promising?

Daniel Quinn is the award-winning author of Ishmael, The Story of B, and My Ishmael. He lives in Houston, Texas. Quinn’s writing life, spanning more than 40 years, has been an inspiration to aspiring writers everywhere. Before beginning work on the book that would ultimately make him famous, he wrote advertising copy, scripts for audio and filmstrip productions, math and science textbooks, encyclopedia articles, short stories, and children’s books. Focus and success came late. He was 56 when he won the half-million-dollar Turner Tomorrow Fellowship for his novel Ishmael, a book which itself has had an extraordinary career. Originally thought to have little future, it slowly gained popularity among readers after its publication in 1992, finding its way into four editions, dozens of printings, twenty languages, and hundreds of classrooms all over North America, from mid-school to graduate school, where it continues to be used in courses as varied as history, geography, biology, economics, sociology, anthropology, philosophy, religion, and literature. Quinn was born and raised in Omaha, Nebraska, studied at St. Louis University, the University of Vienna, and Loyola of Chicago. After more than two decades in Chicago, one in New Mexico, and one in Austin, Texas, he and his wife, Rennie, now live in Houston, where he’s finishing a new novel.
Learn More About Beyond Civilization
print

The Interpretation of Dreams

Conscientious Objections
Back to Top