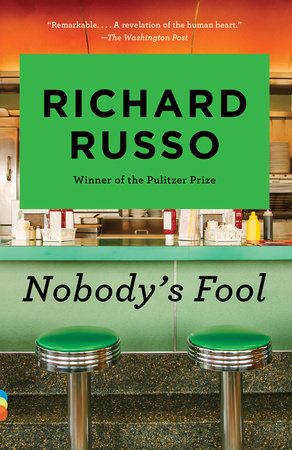 The questions, discussion topics, and author biography that follow are intended to enhance your group’s reading of Richard Russo’s Nobody’s Fool. We hope that they will provide you with different ways of looking at–and talking about–a novel whose size, opulence of character and description, broad social canvas, and sheer narrative zest suggest the books of Dickens, John Irving, and Anne Tyler. Amid the whip-crack repartee and wildly proliferating subplots, readers will also discover a serious exploration of the sometimes nourishing, sometimes strangling ties between fathers and sons; a bittersweet homage to America’s obsolescing small towns, and a ruefully wise take on what earlier writers called predestination and grace and what Russo’s characters experience as plain dumb luck.

Richard Russo, in his own words:

Q: Some critics have described the characters in your latest novel as losers. What would you say to them?

Q: Your fiction, like that of many Victorian writers, has a very definite sense of place. What role does place play in Nobody’s Fool?

A: Place is inseparable from character. If I try to write books about people before I have a pretty good sense of the places, that’s an indication that I don’t know the characters as well as I need to. And it’s crucial to have a sense of place as process. Sully going to Hattie’s first, then the OTB, then the Horse; the rhythms of his life are inseparable from who he is and what he thinks of himself. That comes from some of the real loves of my life in terms of literature, Dickens first and foremost: how do we know Pip in Great Expectations except in terms of the forge, the blacksmith’s shop, and the marsh?

1. This novel’s title, Nobody’s Fool, is a punning reference to its protagonist, Donald Sullivan, who at age 60 is "divorced from his own wife, carrying on halfheartedly with another man’s, estranged from his son, devoid of self-knowledge, badly crippled and virtually unemployable–all of which he stubbornly confuse[s] with independence." Why is Sully so insistent on remaining nobody’s fool? How has this determination affected his relationships with other people?

2. One consequence of Sully’s prickly autonomy is his tendency to go off on "stupid streaks." Is Sully a stupid man? How would you evaluate a freedom whose defining characteristic seems to be the freedom to do the wrong thing at the wrong time?

3. From the beginning we know that Sully has a bad knee, and his refusal to treat–or even favor–it generates many of the novel’s complications. In what ways does this injury resonate with the novel’s themes?

4. Sully’s string of misfortunes may also be due to bad luck or malign predestination. Is he destined to be unlucky? To what extent are his actions and character predetermined?

5. Sully’s father brutalized him as a child. Sully deserted his son, Peter. Peter abandoned his timid eldest son, Will, to the mercies of his sociopathic little brother. What causes does the author posit for this four-generation history of cruelty and neglect?

6. Perhaps to compensate for Sully’s brutal father, Russo supplies Sully with a very good, if somewhat sharp-tongued, surrogate mother, Beryl Peoples. She may, in fact, be the most real and enduring attachment Sully has. How does their relationship compare with Beryl’s relationship with her real son, Clive, Jr.? How is the antagonism between Clive and Sully an extension of their childhood rivalry for the affections of Beryl’s late husband?

7. How would you characterize Russo’s portrayal of relations between the sexes, and why are most of his characters divorced, widowed, or unhappily married?

8. The sudden flashes of good luck (or simple happiness) that illuminate Sully’s life and the lives of other characters may be attributable to grace, which The Random House Dictionary of the English Language defines as "the influence or spirit of God operating in humans to regenerate or strengthen them." At what moments does grace seem to operate in this novel?

9. Nobody’s Fool is also a novel about a town, North Bath, New York, whose misfortunes, like Sully’s, may be due to collective stupidity or fate. Even North Bath’s venerable elms now constitute a threat to its communal life and property. In what ways do the novel’s principal locales–Hattie’s, the OTB, and the White Horse–function as a microcosm of the town as a whole? To what extent are North Bath’s decline and grandiose visions of renewal symptomatic of the political and economic climate of America in the 1980s?

10. What role does class play in this novel? To what extent are its characters shaped by economic circumstances?

11. One critic has described Nobody’s Fool as "a sad novel camouflaged in comedy." How is this true? What is the nature of the book’s sadness? How does Russo balance his comic and tragic impulses?

Richard Russo grew up in Gloversville, New York, the small, mostly working-class town that has served as the prototype for his fictional Mohawk and North Bath. His parents were separated, and he recalls his father as a man who "lived a life of studied bad habits. I became of interest to him when I got old enough to follow him into the OTB and then into the bar and then into the pool hall, when I could be taken to the places he went and not interrupt the rhythm of his life."

With his father, Russo worked construction jobs during his vacations from the University of Arizona, where he received his B.A. He later went on to get a master’s degree and had almost earned his Ph.D. in American literature when it occurred to him that he would rather write his own novels than analyze other people’s. He is the author of three books, Mohawk, The Risk Pool, and Nobody’s Fool, which has recently been made into a feature film starring Paul Newman and Bruce Willis. Richard Russo teaches writing at Colby College in Waterville, Maine. He lives there with his wife, Barbara, and their two daughters.
Learn More About Nobody’s Fool
print

The Only Story
Julian Barnes
Back to Top