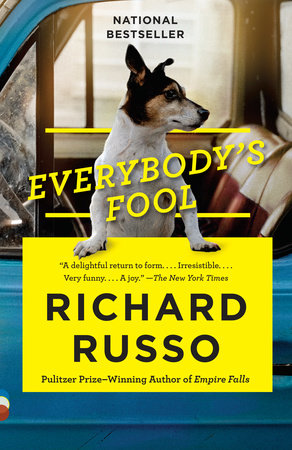 In these pages, Richard Russo to North Bath, the Rust Belt town first brought to unforgettable life in Nobody’s Fool. Now, ten years later, Doug Raymer has become the chief of police and is tormented by the improbable death of his wife—not to mention his suspicion that he was a failure of a husband. Meanwhile, the irrepressible Sully has come into a small fortune, but is suddenly faced with a VA cardiologist’s estimate that he only has a year or two left to live.

As Scully frantically works to keep the bad news from the important people in his life, we are reunited with his son and grandson . . . with Ruth, the married woman with whom he carried on for years . . . and with the hapless Rub Squeers, who worries that he and Sully aren’t still best friends. Filled with humor, heart, and hard-luck characters you can’t help but love, Everybody’s Fool is a crowning achievement from one of the great storytellers of our time.

1. Evaluate the title of the book. Who do you believe the title is referencing? Is the foolishness of the title character—or characters—something determined by public opinion or something revealed via a process of self-reflection? Explain. What causes the character(s) to act foolishly or otherwise be perceived as foolish?

3. Everybody’s Fool opens with a description of the local cemetery. How might the cemetery and its present condition function as symbolism? What might the uprooted tree and coffins represent? Why do you think that Russo chose to begin the story with this imagery of the divided and overflowing cemetery?

4. Evaluate the themes of fortune and luck. How much are the characters’ lives shaped by luck? Do they have any control over their fate? If so, where is this evident? Why does Gus think that the townspeople of North Bath are determined to believe in the idea of luck and fortune? Do you agree with him? Why or why not?

6.  In the chapter entitled “Slinky,” Raymer indicates that he prefers order, but says that generally “humans preferred to meander” (75). What does he mean by this? Does the novel ultimately seem to support or refute his claim? Explain.

7. Is there an identifiable protagonist or antagonist in the book or a sense of “good” and “bad” characters, or do the characters offer a more complicated and nuanced view of humanity and human nature? Does any single point of view overshadow the rest? Which of the characters do you feel most sympathetic toward and why? Who do you find the most disagreeable and how does the author elicit this response? Does your perception of any one of the characters change substantially over the course of the novel? If so, which character and how?

9. Why do you believe that the author incorporates elements of comedy and the absurd in the novel? How did these elements influence and shape your interpretation of the novel and your response to its characters? For instance, does the use of comedy make you feel more or less sympathetic to the characters and their plight? Explain.

10. Many of the characters in the book are aging and are faced with their morality. How does this affect their actions and the way they choose to live? What questions arise as a result of their awareness of their limited time? What answers to these questions do they arrive at? Do these aging characters seem to become wiser with age?

11.  How does Russo portray the aging process? Do the older characters age gracefully and with dignity? Do they seem to have control over this process and how they handle it? Discuss.

12. How do the characters use fantasy to escape their present condition? What examples of this are found in the novel? Does this kind of escapism prove to be an effective or destructive means of coping?

13. Why did Gus wish to be mayor of North Bath? What did he hope to accomplish in this position? What obstacles does he face as he attempts to accomplish this? Is he ultimately successful? Why or why not?

15. In the chapter entitled “Grave Doings,” Carl asks what men are even good for. Sully admits that this is a question he has avoided asking himself his entire life. Does the novel ever answer this question? Why might the characters be so determined to avoid it?

16. Explore the theme of legacy. How do characters who are deceased or who are referenced indirectly in the story influence the main characters of the book? Consider, for example, Miss Beryl, Rub’s parents, Becka, or Judge Flatt. How do they continue to have an impact on the lives of others and affect the community even in their absence? What might this indicate about the power of an individual, the weight of one’s actions, and the value of a single human life?

17. Evaluate the treatment of prejudice and race in the book. Why is Miller hesitant to ask out Charice? Why does Raymer feel like a fool when Charice tells him what she plans to make him for dinner? How do the people of Bath treat Jerome? Are the residents of North Bath primarily an accepting people?

18. Consider the treatment of women. What do the female characters seem to share in common? How are they treated by the men in the novel? How do the women view themselves? What do their stories, when considered collectively, reveal about sexuality and womanhood?

19. Russo named one of the chapters “Secrets”. What secrets do the characters in the novel keep? Do any of the characters ultimately choose to reveal their secrets? If so, what motivates them and what happens when they do? What might this indicate about truth telling or about shared experience?

20. Is there any evidence of a system of justice in the world the characters inhabit? Explain. If you believe that there is, does the book seem to suggest that justice is something dealt by an outside force such as karma, God, or fate, or is it something that must be dealt by humankind? What injustices are presented in the novel? Do you believe that they could have been prevented or otherwise addressed? If so, how?

21.  Why didn’t Miss Beryl want Sully to enlist in the army? What does she think young people are always being asked to risk? Do you agree with her? Can readers tell how the veterans in the story have been affected or changed by their service?

22. Evaluate the theme of forgiveness. What examples of forgiveness, if any, are evident in the book? What causes the characters to reach a place of forgiveness—or to be unable to forgive? What does Miss Beryl think is the real reason that people forgive others? What does the book suggest about self-forgiveness?

23.  Compare Everybody’s Fool with Russo’s 1993 novel Nobody’s Fool. What themes does Russo revisit in Everybody’s Fool? Who are some of the recurring characters and how have they changed or remained the same between books? What do you think the books offer collectively that they do not or cannot offer when considered singularly?

Richard Russo is the author of seven previous novels; two collections of stories; and Elsewhere, a memoir. In 2002 he received the Pulitzer Prize for Empire Falls, which like Nobody’s Fool was adapted to film, in a multiple-award-winning HBO miniseries.
Learn More About Everybody’s Fool
print

This Book Will Save Your Life
A. M. Homes

The Most Dangerous Place on Earth
Lindsey Lee Johnson

Before You Suffocate Your Own Fool Self
Danielle Evans

City on Fire
Garth Risk Hallberg
Back to Top