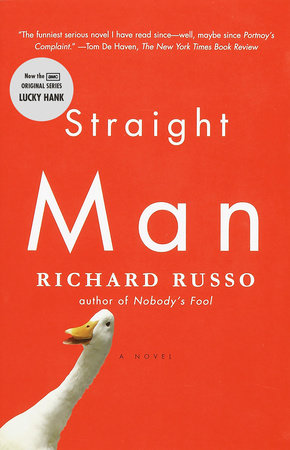 The questions, discussion topics, and author biography that follow are intended to enhance your group’s experience of reading Richard Russo’s Straight Man.  We hope they will provide interesting new angles from which to examine this funny, poignant, and compassionate novel by one of the most compelling storytellers of our day.

William Henry Devereaux, Jr., known to his friends as Hank, is a fast-talking, self-deprecating man, the classic wise guy.  Now approaching fifty, Hank finds himself heading full-speed into a midlife crisis: he despises his job as English professor at an undistinguished middle-American university, and his status as a "novelist" who has not written any fiction for twenty years.  He fears he may have prostate cancer, he suspects his wife of having an affair, and he avoids even thinking about the fact that his father, the elder statesman of American literary criticism with whom he has much unresolved business, will soon be reentering his orbit.  Over the course of a single convoluted week, the hapless Hank goes through a painful series of adventures, some hilarious and some harrowing, which eventually take him to the brink of sanity.  As he did in Nobody’s Fool, Russo proves himself a master of depicting the fraught, unvoiced currents that run between parents and children, husbands and wives.  In his intelligence, humor, and ability to merge sorrow and farce into a seamless fabric, Richard Russo stands out as a writer of surpassing insight and humanity.

1. Why does Hank begin his tale with the story about his parents getting him a dog? What does this story tell us about the Devereaux family, and of Hank’s place within it? "To me, his son, William Henry Devereaux, Sr., is most real standing in his ruined cordovan loafers, leaning on the handle of a borrowed shovel, examining his dirty, blistered hands, and receiving my suggestion of what to name a dead dog" [p. xvii], Hank writes. What is it about the moment, and the act, that shows up Devereaux, Sr.’s essential realty?

2. Why did Hank decide to become a writer, and an English professor?

3. "Teddy belongs to that vast majority who believe that love isn’t something you kid about. I don’t see how you could not kid about love and still claim to have a sense of humor" [p. 7]. Is this the real Hank talking, or is it part of the compulsive cynicism that his mental state has engendered? Is it in fact a cynical observation, or simply a true one?

4. Early in the book, various characters, including Lily and Hank’s mother, let Hank know that they are worried about him. What symptoms of distress and instability does Hank show in the first half of the book? How do we, the readers, know that there is in fact something to worry about?

5. Why does Hank have persistent fantasies of seeing Lily with other men? Do these fantasies represent his fears, or his desires?

6. Hank dreads his colleagues moving to Allegheny Wells and becoming his neighbors. Lily wonders why: "Jacob Rose is your friend," she says. "There’s nothing wrong with Finny and Marie" [p. 29]. Is she right: are they his friends? If so, why has Hank become so suspicious of them?

7. Why has Julie chosen to build a replica of her parents’ house? Why does Russell hate it, while liking Hank and Lily’s house? What does Russell and Julie’s stalemate over the house tell us about their marriage, and their life together?

9. What effect does the academic tenure system have upon the tenured professors themselves? When Lily goes on her job interview, Hank finds himself filled with admiration for her; "Tenured these last fifteen years, I find it hard to imagine being in that position again, of allowing myself to be judged" [p. 59]. Why does Hank make his surprising career decision at the end of the novel?

10. Why does Russo call the first portion of the novel "Occam’s Razor"? William of Occam, says Hank, "sought to reconcile Faith with rational inquiry" [p. 107]. Would you say that this describes Hank’s search during the course of the novel?

11. "In English departments the most serious competition is for the role of straight man" [p. 106]. What does Hank mean by this? Is the meaning of the novel’s title clear after Hank makes this statement?

12. Why does Hank keep harping on William Cherry, the man who lay down on the town’s railroad tracks?

13. Why has Hank never written another book after his first, quite successful one? Is there any indication that he will write one in the future: that is, after the action of the novel has ended?

14. The character of Hank’s mother is a complex one. What does she want for herself? For Hank? What bargains has she made with life? What has she given up? Is there any chance, at the end, for her and Hank to become close to one another?

15. Why does Hank feel exhilaration rather than fear when he suspects he may have prostate cancer? Is this feeling related to his fascination with William Cherry? With his fantasies about Lily?

16. West Central Pennsylvania University is clearly a mediocre institution; when it comes to hiring the new chairperson, for instance, Hank admits that "to hire someone distinguished would be to invite comparison with ourselves, who were undistinguished" [p. 18]. Part of middle age, for many people, is settling for the second-rate, the acceptance of life’s inevitable limitations. "We have believed, all of us, like Scuffy the Tugboat, that we were made for better things. . . . We’ve preferred not to face the distinct possibility that if we’d been made for better things, we’d have done those things" [p. 132-3]. Does this process of settling, or acceptance, diminish Hank, or does it strengthen him? Why does Russo include the Spender poem on page 207?

17. How does Hank’s midlife crisis compare with that of his father at Columbia? Is Hank’s crisis successful: that is, does he resolve the pain and fear that has begun to emerge from his subconscious and take over his life? Did Hank’s father resolve any such issues when he broke down at Columbia? What might the father’s present emotional state have to do with his having coped, or refusing to cope, with that breakdown? What do his changing attitudes towards Dickens signify, and what does his admission that he had misjudged Dickens tell us about his mental state?

Richard Russo was born in 1950 and grew up in Gloversville, New York.  Russo attended the University of Arizona, later going on to get an M.A. in American literature and to do some work towards a PhD.  He is the author of three previous novels, Mohawk, The Risk Pool, and Nobody’s Fool, which was made into a film directed by Robert Benton and starring Paul Newman.  Russo teaches writing at Colby College in Waterville, Maine, where he lives with his wife Barbara and their two daughters.
Learn More About Straight Man
print

If Morning Ever Comes
Back to Top