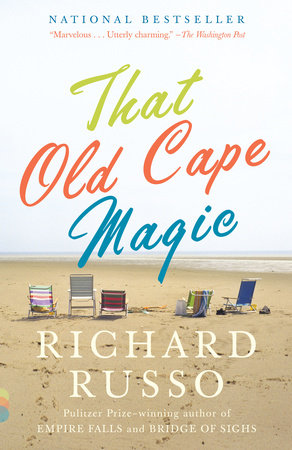 The questions, discussion topics, and reading list that follow are intended to enhance your reading group’s discussion of That Old Cape Magic, Richard Russo’s rueful story of a marriage, and of all the other ties that bind.

Griffin has been tooling around for nearly a year with his father’s ashes in the trunk of his car, but his mother is very much alive and not shy about calling him on his cell phone. She does so as he drives down to Cape Cod, where he and his wife, Joy, will celebrate the marriage of their daughter Laura’s best friend. For Griffin this is akin to driving into the past, since he took his childhood summer vacations here, his parents’ respite from the hated Midwest. And the Cape is where he and Joy honeymooned, in the course of which they drafted the Great Truro Accord, a plan for their lives together that’s now thirty years old and has largely come true. He’d left screenwriting and Los Angeles behind for the sort of New England college his snobby academic parents had always aspired to in vain, they’d moved into an old house full of character, and they’d started a family. Check, check, and check.

But be careful what you pray for-especially if you manage to achieve it. By the end of this perfectly lovely weekend, the past has so thoroughly swamped the present that the future suddenly hangs in the balance. And when, a year later, a far more important wedding takes place, that of their beloved Laura, on the coast of Maine, Griffin is chauffeuring two urns of ashes as he contends once more with Joy and her large unruly family, and both he and she have brought dates along. How in the world could this have happened?

That Old Cape Magic is a novel of deep introspection and every family feeling imaginable, with a middle-aged man confronting his parents and their failed marriage, his own troubled one, his daughter’s new life, and, finally, what it was he thought he wanted and what in fact he has. The storytelling is flawless throughout, scenes of great comedy, even hilarity, alternating with moments of understanding and heart-stopping sadness, and the ending is at once surprising, uplifting, and unlike anything this Pulitzer Prize winner has ever written.

1. What does Jack Griffin want?

2. In reference to his parents’ ongoing but fruitless search for a Cape Cod beach house, Griffin muses, “Perhaps . . . just looking was sufficient in and of itself” (page 9). Is looking enough? Which characters prove or disprove this point of view?

3. One page 16, Griffin points out to his mother that she and his father used to sing “That Old Cape Magic” on the Sagamore Bridge, “as if happiness were a place.” Is it possible for happiness to be a place? Can a place save a relationship?

4. Griffin poses a question to himself: “Why was he more resentful of Harve and Jill, who really wanted to understand how he made his living, than his own parents, who had never, to his knowledge, seen a single film he had anything to do with” (page 49)? Griffin doesn’t admit to an answer, but what do you think the answer is?

5. In “The Summer of the Brownings,” young Griffin refuses to spend his last night on the Cape with Peter, even though the decision only serves to hurt everyone. Can you point to other incidents in which Griffin exercises his perverse desire to hurt himself and others?

6. Why is Griffin so apprehensive of commitment? What is he afraid of losing?

8. Is Griffin afraid of being happy? Is being the happy the same as “settling”?

9. How has Griffin’s cynicism caused him to misinterpret the intentions of those around him?

10. Why does it take so long for Griffin to dispose of his parents’ remains?

11. Why does Griffin feel the need to carry on internal conversations with his mother?

12. How does Griffin’s relationship with his parents lead to the dissolution of his marriage to Joy?

13. Why does Griffin insist on staying in L.A., away from Joy?

14. Griffin uneasily considers the parallels between Joy’s attachment to himself and Tommy and Laura’s attachment to Andy and Sunny. How do these similar triangles play out?

Richard Russo lives with his wife in Camden, Maine, and in Boston. In 2002 he was awarded the Pulitzer Prize for Empire Falls.

The Tin Can Tree
Back to Top