Cuando era puertorriqueña / When I Was Puerto Rican Reader’s Guide 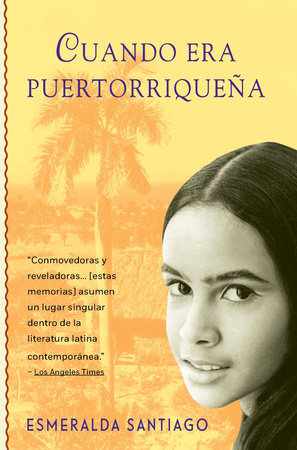 Cuando era puertorriqueña / When I Was Puerto Rican Reader’s Guide

The questions and discussion topics that follow are designed to enhance your group’s reading of Esmeralda Santiago’s When I Was Puerto Rican. We hope they will provide you with a number of ways of looking at–and talking about–this beautiful narrative of a young girl’s coming-of-age in 1950s Puerto Rico and of her subsequent move to the very different world of New York City.

Santiago describes herself and her family with affection and sadness. She sees the beauty as well as the poverty in the Puerto Rican countryside where she spent her childhood, and she writes of her hardworking mother, her errant, romantic father, and their wrenching love-hate relationship, with pain but without judgment. Santiago’s chronicle of her Puerto Rican childhood and her family’s move to the alien and frightening new world of New York City is a unique story of the survival of a strong individual, but it also gives insight into the lives of thousands of immigrants to this country. While remaining very much a part of the world they left behind, these immigrants are faced with a new language, a new culture, and new expectations and codes of conduct. Santiago’s narrative touches upon a number of issues that are currently the subject of intense debate in the United States: immigration quotas, cultural imperialism, bilingual education, birth control, and many others. Though Santiago provides no answers, she does give American readers a broader base of empathy and information with which to examine these problems.

1. Though Santiago’s story takes place in several locations, she specifically contrasts two kinds of community: the rural one, represented by Macún, and the urban culture of Brooklyn. What role does "tradition" play in each society? Could Macún be classified as a "traditional society"? How cohesive is the family and social unit in Macún? How does the family unit fare when it is transplanted to New York? Would Tata and Chico lead the type of life they do if they were still in Puerto Rico?

2. Much of the book’s text and subtext concern the different roles men and women are expected to play in Puerto Rican society. Though the men work hard, they are allowed time for recreation; the women work far harder with no time off at all. Women serve men, but they also scorn them. How do the demands made on men and women differ in this culture? How similar–or different–are attitudes in the United States? How does hostility between men and women affect the Santiagos’ lives?

3. Like all young people, Negi gropes to understand the concept of love by observing the examples she sees around her. What idea of romantic love does she receive from the radio programs and romantic novels she devours? In what way does her principal model of a love relationship–that of her parents–contrast with this model? Is there any way of reconciling these two visions of love? What role does sex play in her romantic imaginings? What does it mean in Negi’s world to be señorita? Why is her position as casi señorita such a difficult one?

4. Describe the ways in which the Puerto Rican concept of dignidad contrasts with contemporary American manners and mores. Is there an equivalent concept in our culture? In the Puerto Rico described by Santiago, how effective is dignidad as a social code? Does it contribute to the well-being of the community? Does it contribute to the oppression of women?

5. The scenes in which Negi translates for her mother and other Hispanic women in the welfare office are suggestive of tensions within the city culture. How can we deduce Mami’s feelings from Santiago’s description? How does Negi feel about the women who pretend to be Puerto Rican so that they can collect welfare? Why does she agree to translate their lies?

7. How does Santiago use the event of her audition at the High School for the Performing Arts as a symbolic dramatization of the many barriers that she has had to cross in order to escape Brooklyn, Hispanic cultural ghettoization, and her life of poverty?

8. Certain contradictions in Puerto Rican culture are symbolized by the juxtaposition in Santurce of the Evangelical church and the botanica. How does each one minister to the spiritual needs of the people? How do the different belief systems of the Puerto Ricans–Christian, African, Native American–manifest themselves in the Santiago family?

9. What effect does the past tense of the title have on the reader? (Discuss this point as if you haven’t read Santiago’s note to readers.) At the end of the book, Esmeralda Santiago calls herself a hybrid. Is there anger in her conclusion, as well as pride in her own achievement?

10. In writing When I Was Puerto Rican, Esmeralda Santiago encountered difficulties in finding appropriate English terms for some of the Puerto Rican concepts she was trying to convey. She decided to leave many of these words in Spanish, providing a glossary at the end of the book. Can you explain why she might have had a hard time finding exact English equivalents for concepts like dignidad, jÌbaro or toda una señorita? Can you come up with good translations of these terms and others in the text?

11. How does Papi define "imperialism"? Does Negi come to share his opinion? In giving her father’s opinions, is Santiago telling the reader something about America or is she using the conversation as a way to reveal her father’s character?

12. How might you compare the Latino experience of assimilation with those of, for example, Chinese, Jewish, or Haitian immigrants? How might the cultural barriers between these groups and mainstream America differ? What roles do race and language play in the process?

13. When I Was Puerto Rican is nonfiction, but Santiago relies on many techniques important to fiction writing. What sort of "narrative voice" has she chosen to use? What ideas of Negi’s character and culture do we glean from her narrative style? She has chosen to portray her parents and relatives not as fully developed characters but as adults seen from a child’s point of view. How does that enhance or detract from the book’s impact?

A Note to the Reader from Esmeralda Santiago:

When I began writing this book, I had no idea it would result in a dialogue about cultural identity. But as I’ve traveled around the country talking about it, people tell me that, while the culture I’m describing may not be the same as the one they grew up in, the feelings and experiences are familiar, and some of the events could have been taken from their own lives. It has been particularly poignant to speak to immigrants who have returned to their countries, only to discover how much they have changed by immersion in North American culture. They accept and understand the irony of the past tense in the title, the feeling that, while at one time they could not identify themselves as anything but the nationality to which they were born, once they’ve lived in the U.S. their "cultural purity" has been compromised, and they no longer fit as well in their native countries, nor do they feel one hundred percent comfortable as Americans.

When I returned to Puerto Rico after living in New York for seven years, I was told I was no longer Puerto Rican because my Spanish was rusty, my gaze too direct, my personality too assertive for a Puerto Rican woman, and I refused to eat some of the traditional foods like morcilla and tripe stew. I felt as Puerto Rican as when I left the island, but to those who had never left, I was contaminated by Americanisms, and therefore, had become less than Puerto Rican. Yet, in the United States, my darkness, my accented speech, my frequent lapses into the confused silence between English and Spanish identified me as foreign, non-American. In writing the book I wanted to get back to that feeling of Puertoricanness I had before I came here. Its title reflects who I was then, and asks, who am I today?

Esmeralda Santiago is the eldest of eleven children. She spent her childhood in Puerto Rico, moving back and forth between a tiny village and Santurce, a suburb of San Juan. With her mother and siblings she moved to New York City in 1961. She graduated from the High School for the Performing Arts, then attended Harvard University and earned an M.F.A. from Sarah Lawrence College. She is now a journalist and, with her husband, owns a film production company. She is the mother of two children.
Learn More About Cuando era puertorriqueña / When I Was Puerto Rican
print

Porque te amo / Because I Love You
Freddy DeAnda