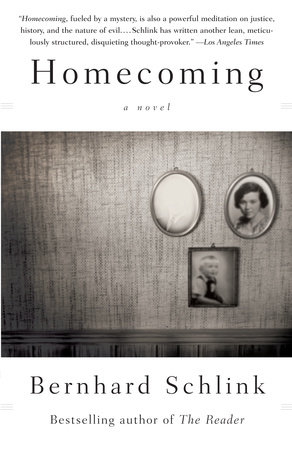 “Homecoming, fueled by a mystery, is also a powerful meditation on justice, history, and the nature of evil. . . . Schlink has written another lean, meticulously structured, disquieting thought-provoker.”
—Los Angeles Times

The introduction, questions, and suggestions for further reading that follow are designed to stimulate your group’s discussion of Bernhard Schlink’s novel, Homecoming.

Homecoming, Bernhard Schlink’s first novel since his international bestseller The Reader, is the story of one man’s odyssey and another man’s pursuit. A child of World War II, Peter Debauer grew up in Germany without a father. As an adult, Peter embarks on a search for the truth surrounding his father, supposedly killed during the war. This search takes him across Europe and to the United States and back, finding witnesses, falling in and out of love, chasing fragments of a story and a person who may or may not exist. Homecoming is a story of fathers and sons, men and women, war and peace. It reveals the humanity that survives the trauma of war and the ongoing possibility for redemption.

1. Publishers Weekly, in a starred review, called Schlink’s protagonist “a flawed character who elicits the reader’s understanding but not affection—until the poignant denouement.” Do you agree with this assessment of Peter? Do you think Schlink wants his readers to understand but not like Peter? Why?

2. In what ways is Peter’s singular search for the truth about his father emblematic of the postwar generation of Germans trying to piece together what transpired during the war and afterward?

3. How is Peter both similar to and different from John de Baur? Why are both not completely satisfied with who they are? And how are their quests similar and different? Is history repeating itself, or has Peter learned some lessons from the past?

4. Reinventing identities comes easily for John de Baur, and later for Peter himself. Why do the men feel compelled to create new identities? How easy or difficult would it be for you to reinvent yourself? Why would you want to? Or why not?

5. What does the United States represent for Peter and for John? How is it both a positive and a negative place for the two men?

6. What is going on in the last section of the book, during the professor’s moral experiment in the abandoned hotel? What do the students, and Peter in particular, learn while there? What does the professor accomplish? Or do you think he fails?

7. Discuss the significance of the title. What does coming home mean for the various characters and, do you think, for the author himself? How was the reunification of Germany after forty years divided, a form of homecoming?

8. What is the allure of The Odyssey for the characters in the book? How is it connected to the pivotal pulp fiction book that Peter finds as a child in his grandparents’ house? How is The Odyssey connected to this novel, and to the recurring homecoming theme?

9. The professor’s book is even called The Odyssey of Law. Describe the professor’s “iron rule” philosophy and how it connects with his own odyssey, taking him from Switzerland to Nazi Germany to New York City and Columbia University.

11. Describe the narrator’s voice. Is it appealing? Do you trust Peter as a narrator? Do you sympathize with him and understand his motives? Do you identify with him at all?

12. Why does Peter feel such a sense of duty to his ex-girlfriend’s son, Max? Having no father or children of his own, why does he want to be a father figure to Max?

14. Why does Peter keep leaving Barbara and returning to her? Discuss their relationship. Why in the end is Barbara good for Peter . . . and different from other women he’s been in love with?

15. What are the differences between East and West Germany as shown in the novel? Why is Peter able to pretend to be a professor in East Germany? Do you think he would have been able to do this in West Germany?

16. What moral questions about Germany after the war does Schlink bring up in this novel? How does guilt, both collective and personal, play into the story? Which generation of Germans seems to be burdened with guilt? Do you think this generation also feels betrayed by the previous one?

17. Peter lies to get a teaching job in recently reunited Germany. He also poses as a historian to get into John’s class at Columbia. And of course, John lies and poses as various professions with various names throughout his own career path. What is Schlink saying about lies and lying? Why do his characters lie? And do they feel guilty about it?

18. In Homecoming, Peter often concerns himself with justice; in fact, he even writes his college thesis on justice. He is also obsessed with other’s, in particular John’s, views on justice and history. How do you think Schlink’s other career as a lawyer and law professor affect these meditations on justice, and the novel as a whole?

19. What is Schlink suggesting about the relationship between past and present, and between national and personal history?

Bernhard Schlink was born in Germany. He is the author of the internationally bestselling novel The Reader, as well as the collection of stories Flights of Love, and four prizewinning crime novels—The Gordian Loop, Self’s Punishment, Self’s Deception, and Self’s Murder. He lives in Berlin and New York.

The Life of Objects
Susanna Moore

The Pieces from Berlin
Michael Pye

The Painter of Battles
Arturo Pérez-Reverte

In Our Strange Gardens
Michel Quint

Dancing with the Enemy
Paul Glaser

The End of the Jews
Adam Mansbach

Children of the Holocaust
Helen Epstein

Emissary of the Doomed
Ronald Florence

Blooms of Darkness
Aharon Appelfeld
Back to Top