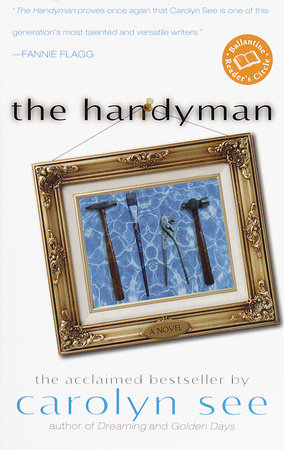 "The Handyman proves once again that Carolyn See is one of this generation’s most talented and versatile writers."
—Fannie Flagg

"BEGUILING, CHARMING, WITTY, INSPIRING–Carolyn See’s novel The Handyman is so wonderful in so many ways that it’s going to seem as if her mother wrote every review for it. Twenty-eight-year-old Bob Hampton is a struggling artist who is panicking at the possibility that he will never find his authentic ‘voice.’ After a failed (and endearing) trip to Paris, Bob returns to his home in Los Angeles and decides to spend the summer working as a handyman before giving art school one more try. What he becomes, of course, is a handyman of the heart."
—The Cleveland Plain Dealer

"[AN] INVENTIVE AND ENERGETIC STORY . . . See offers a satisfying take on the mysterious and unpredictable ways that real life can be turned into art."
—People

1. Do you think Peter Laue is going to get his grant? Why or why not?

2. As a handyman, Bob also a successful therapist. Do you agree with this assessment? Discuss the significance of the title of this novel.

3. Have you had a Bob in your life? If not, would you like to meet someone like him?

4. What do you think would have happened to the characters in this novel if Bob had not entered their lives?

5. Who do you think is the inspiration for the Lilith paintings?

6. Did you figure out the identity of Se-ora Hampton before the end of the novel? Do you think she was the right woman for him?

7. Why do you think Kate does not realize that her Bob became Robert Hampton?

8. Unlike the very dysfunctional families we meet throughout the course of this novel, Angela and Bob seem to have created a family that really works. Why do you think this is so?

10. Beginning with Bob’s mother, so many of the characters in this novel seem paralyzed by their loneliness. Discuss why it can be so difficult to connect with other people.

11. As Bob compares his own far-from-privileged upbringing with the affluence of the tumultuous Landry household, he reflects, "Rich kids tried to destroy themselves as a hobby. . . . We couldn’t afford a catastrophe." What does he mean?

12. Why do you think the housewives in this novel feel so helpless and hopeless? Why do they have so much trouble with their primary job of creating and sustaining a home?

13. This novel explores the landscape of failed marriages. How do you think people end up so trapped and unhappy? What brought these people together? What tore them apart?

14. "This wasn’t how grown-up men were supposed to spend their time, but God, this was nice," thought Bob as he was playing with Tod. Why does he think this? Discuss societal expectations regarding men and work and family.

15. Hank and Ben’s dreams of Hollywood fall very short. What is it about Los Angeles that drew them to it? What is the source of its pull on the popular imagination?

16. What does Bob learn while he is cleaning out Professor Le Clerc’s office and, essentially, throwing out his life’s work?

17. How does Bob’s understanding of his art change over the course of this novel? Do you think he would have been successful if he had stayed in Paris?

18. Many reviewers refer to this novel as a fairy tale. Do you agree?

19. Describe this novel in a sentence or two. Have your group share their summaries and discuss the range of opinions and impressions.

20. How was your reading group formed? Why do you think it has stayed together? Do you agree with Carolyn See’s reflections on the phenomenon of the reading group?

21. Why did your group select this novel? Have you or will you read other works by Carolyn See?

22. How does this novel compare with other works your group has read?

CAROLYN SEE is the author of nine books. She is the Friday-morning book reviewer for The Washington Post, and she has been on the boards of the National Book Critics Circle and PEN/West International. She has won both Guggenheim and Getty fellowships and currently teaches English at UCLA. She lives in Pacific Palisades, California.
Learn More About The Handyman
print

The Whiteness of Bones

Baby of the Family
Back to Top