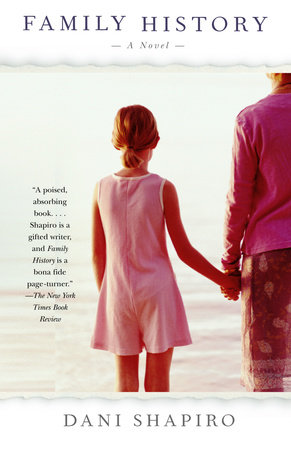 “Absorbing. . . . Shapiro is a gifted writer, and Family History is a bona fide page-turner.” —The New York Times Book Review

The introduction, discussion questions, suggested reading list, and author biography that follow are intended to enhance your group’s reading of Dani Shapiro’s Family History, a ferociously paced new novel about a woman losing control of her life, her marriage, and her kids, and discovering that you can do everything right and still find the world you’ve made slipping away from you.

Rachel Jensen seems to have it all: a husband she adores, challenging work in art restoration, a beloved teenage daughter, and a new baby on the way. But when Rachel’s delivery of her infant son turns dangerous and frightening, requiring an emergency caesarean, her daughter, Kate, rushes out of the hospital alone—one of the first indications that something is not right with Kate’s state of mind. After Rachel comes home with the baby, Josh, all seems well enough until he is badly injured in a fall from Kate’s arms while she is taking care of him. Soon Rachel’s happy marriage has collapsed, Kate has been placed in a school for emotionally unstable adolescents, and normal family life seems a distant memory. Set in a small Massachusetts town, Family History is about a family spiraling toward disintegration, the terrible consequences of guilt in children, and a mother’s nightmarish realization that she cannot protect her own child.

1. The novel is told from Rachel’s point of view. Judging from her character as she presents it, is Rachel a good person? What does she want for herself and for her family? What kind of a mother is she?

2. In Dr. Zelman’s office, Ned and Rachel are asked for information about their families’ psychiatric histories. Rachel admits that her mother has a “narcissistic personality disorder” and begins to feel panic: “It was as if an invisible hand had seized me by the throat and forced me to swallow the ugliest possible truth. . . . I came from a sick and faulty genetic line and had passed it all down to my daughter” [p. 134]. Judging from her mother’s and her daughter’s behavior, do Rachel’s worries about this possibility seem justified?

3. Why does Ned move out? Does he assume that Rachel believes Kate’s accusation that he sexually abused her? How does Ned come across as a father and as a husband?

4. Comment on the novel’s structure and on Shapiro’s decision to disrupt the narrative chronology. What is the effect of this style on revealing what has happened to the family?

5. Family History engages the questions of how we become who we are and how much control we have over our lives, considering our genetic inheritance. When pregnant with Kate, Rachel thinks, “How could anything good come out of me, when I came from this angry messed-up woman?” [p. 31]. Why does Rachel feel so preoccupied with what her children have received from her side of the family, when Ned does not? Does Rachel worry too much about things she can’t possibly control? Or is the problem that a mother can’t help but feel that she has to control everything that affects the lives of her family?

6. How have Kate’s troubles exacerbated the stressful aspects of Ned and Rachel’s marriage? Rachel says, “Even during the best of times, the subject of Ned’s work was the no-man’s-land of our marriage” [p. 70]. Was moving to a small town away from the art world the wrong decision for both of them?

7. Learning that Kate has been hurt in a fight with another girl at Stone Mountain, Rachel thinks, “We don’t know our daughter. How is it possible? I could find her if I were blindfolded in a room of a hundred girls, but I don’t know what’s going on inside her” [p. 71]. How accurately does the novel depict the confusion and bewilderment of parents whose child is going through a rocky adolescence?

8. Rachel makes it clear that her mother is impossible to deal with, a person who oversteps boundaries and doesn’t respect her daughter’s privacy. Would Rachel be justified in cutting off contact with her mother? What would be gained, and what lost, from such a decision?

9. Judging from Kate’s description of the accident on the stairs [pp. 152–64] and her emotional state during the scene at the hospital, does it seem possible that she is concealing the truth about what happened? Or, on the contrary, is it clear that what happened was purely accidental? Does this issue remain ambiguous? If so, why?

10. How accurate is Liza’s comment that Rachel and Ned shouldn’t worry so much about money? Is Liza’s philosophy of living “as if ” a useful one [p. 177]? Is it better for Ned and Rachel to have financial security or fulfilling work? Might Ned and Rachel have been happier if they had taken more risks?

11. Rachel reflects, “You can live a good life, be the best mother and wife you know how to be, and still it can explode all around you” [p. 251]. What particular insights does Family History offer about motherhood and the kind of inner strength being a mother requires?

12. Discuss the significance of the paintings Rachel finds in the barn [pp. 199–203]. What is the meaning of Ned’s new style and subject matter? What role do the paintings play in bringing Ned and Rachel back together?

13. Kate’s actions leave her parents in the unusual position of having to forgive their daughter for the extensive damage she has done to the family. In the emergency room, Rachel realizes, “I was furious with her, angry beyond comprehension . . . the truest test of unconditional maternal love was being exacted upon me” [p. 159]. How well does Rachel perform in this test?

14. What does the final chapter suggest about the future of the family? Why do Ned and Rachel change their minds and decide to leave Kate at Stone Mountain for a while longer? How hopeful an ending does the novel offer?

Dani Shapiro is the author of three acclaimed novels, Playing with Fire, Fugitive Blue, and Picturing the Wreck, and the bestselling memoir Slow Motion. She teaches in the graduate writing program at The New School and has written for
The New Yorker, Granta, Elle, and Ploughshares, among other magazines. She lives with her husband and son in Litchfield County, Connecticut.

NOT THE END OF THE WORLD
Back to Top