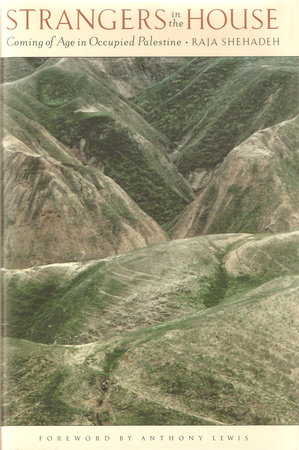 Coming of Age in Occupied Palestine

About Strangers in the House

This “is not a political book,” Anthony Lewis writes in his foreword. “Yet in a hundred different ways it is political . . . Shehadeh shatters the stereotype many Americans have of Palestinians. Hath not a Palestinian senses, affections, passions?” This revealing memoir of a father-son relationship, the first of its kind by a Palestinian living in the occupied territories, is set against the backdrop of Middle East hostilities and more than thirty years of life under military occupation.

Three years after his family was driven from the coastal city of Jaffa in 1948, Raja Shehadeh was born in the provincial town of Ramallah, in the rural hills of the West Bank. His early childhood was marked by his family’s sense of loss and impermanence, vividly evoked by the glittering lights “on the other side of the hill.”

Growing up “in the shadow of home,” he was introduced early to political conflict. He witnessed the numerous arrests of his father, Aziz Shehadeh, who, in 1967, was the first Palestinian to advocate a peaceful, two-state solution for the Israeli-Palestinian conflict. He predicted that if peace were not achieved, what remained of the Palestinian homeland would be taken away, bit by bit, through Israeli settlement. Ostracized by his fellow Arabs and disillusioned by the failure of either side to recognize his prophetic vision, Aziz retreated from politics. He was murdered in 1985.

Strangers in the House offers a moving description of the daily lives of those who have chosen to remain on their land. It is also the family drama of a difficult relationship between an idealistic son and his politically active father complicated by the arbitrary humiliation of the “occupier’s law.” 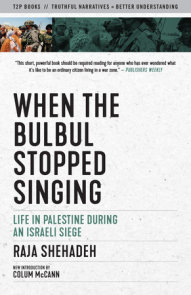 See all books by Raja Shehadeh

RAJA SHEHADEH is a Palestinian lawyer and writer who lives in Ramallah. He is a founder of Al-Haq, a pioneering, nonpartisan human rights organization, and the author of several books, including Strangers in the House and Palestinian Walks.

“An invaluable resource — a moving and heartfelt document that captures the rage and despair of lives stunted by occupation.” – Washington Post

“Unusually honest, beautifully written… The power of Raja Shehadeh’s memoir derives from his willingness, rare among Palestinian writers, to probe the emotional and political limits of his own society… Few Palestinians have opened their minds and hearts with such frankness.” — New York Times Book Review

“Shehadeh’s views… strongly shaped by his work in human-rights law, are reinforced here by reflections on his own life. This book is distinctive and truly impressive.” – The Economist

“[A] stunning autobiography… Strangers In the House [is] a profoundly moving testimony to modern Palestinian life, a more powerful explanation of the Middle Eastern crisis than dozens of lectures and pages of newspaper articles…. It is a book without conventional heroes, a brave and honest testimony to what has failed in the Middle East and what must come to pass if peace will ever be a possibility. More than a single man’s life, it succeeds in untangling the reality behind Palestinian headlines, chronicling how the last 52 years have impacted not just reactionaries and demonstrators, but ordinary human beings.” – The Daily Star (Beirut)

“In this fascinating memoir, leading Palestinian lawyer Shehadeh offers a chilling and moving view of life inside the Occupied Territories…. Anyone seeking a nuanced view of Palestinian experience should read this brave and lyrical book.” —Publishers Weekly

“This book brings an eloquent, understated voice to an often contentious chorus and should help in opening dialogue between Christians, Jews, and Muslims about the future of our holy lands.” – Booklist

“A memoir both political and personal, offering a human and humane perspective.” – KIRKUS REVIEWS

” A remarkable human document that explains better than a hundred political treatises why there is still no peace in the Middle East.” — Amos Elon