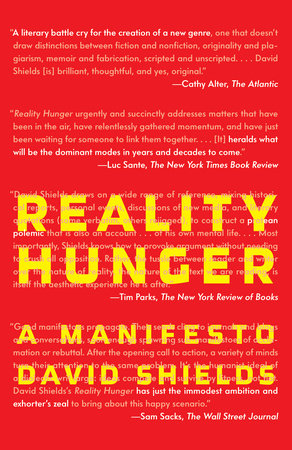 “Who owns the words?” asks a disembodied but very persistent voice throughout much of William Burroughs’s work. Who does own them now? Who owns the music and the rest of our culture? We do. All of us. Though not all of us know it, yet. Reality cannot be copyrighted. Living as we do in an unbearably manufactured and artificial world, we yearn for the “real,” semblances of the real.
An artistic movement, albeit an organic and as yet unstated one, is forming. What are its key components? A deliberate unartiness. “Raw” material, seemingly unprocessed and unprofessional. Randomness, openness to accident and serendipity, spontaneity. Plasticity of form, pointillism. Artistic risk, emotional urgency and intensity, reader/viewer participation. Criticism as autobiography, self-reflexivity, self-ethnography, anthropological autobiography. An overly literal tone, as if a reporter were viewing a strange culture. And especially the erasure of any distinction between fiction and nonfiction—the lure and blur of the real—and thus an extremely strong commitment to exploring questions of provenance, appropriation, quotation, “truth,” genre-prison (emancipation from same).
Most artistic movements are attempts to figure out a way to smuggle more of what the artist thinks is reality into the work of art. So, too, every artistic movement or moment needs a credo, from Horace’s Ars Poetica to Lars von Trier’s “Dogme 95.” The intention of Reality Hunger is to produce the ars poetica for a burgeoning group of interrelated but unconnected artists in a variety of forms and media who are breaking larger and larger chunks of “reality” into their work.

1. The book’s epigraph is a statement from Picasso: “All art is theft.” At many points in the book, Shields brings up issues relating to copyright law. How do you feel about an artist using copyrighted material in the creation of a new work of art? Would you call this an act of theft? Or does this practice promote the free flow of ideas between past, present, and future artists?

2. Discuss the meaning of the phrase “reality hunger.” When Shields uses this phrase, what is he attempting to describe?

3. There are many quotations stitched into the fabric of Reality Hunger. While reading the book, were you able to identify the source of one or more of these other voices? Why do you think the author made use of so many quotations? Why did he leave the sources unidentified? How did this technique affect your experience with the book?

4. James Frey, author of A Million Little Pieces, was highly criticized after it became known that parts of his book were fictitious. Why do you think Shields defends Frey? If Frey had published his book as a novel, would it have received so much attention?

5. In what ways does the structure of Reality Hunger reflect the actual subject matter it discusses? Why do you think Shields chose to arrange the book the way he did?

6. Shields writes, “The world exists. Why recreate it? I want to think about it, try to understand it. What I am is a wisdom junkie, knowing all along that wisdom is, in many ways, junk. I want a literature built entirely out of contemplation and revelation. Who cares about anything else? Not me.” Discuss what you think Shields means when he calls himself a “wisdom junkie”? Do you agree with Shields when he says, “The world exists. Why recreate it?” What implications does this statement have for literature? For other arts?

7. In the chapter entitled “Memory,” Shields suggests that the “truth” is very subjective, due in large part to the fallibility of human memory. Have you ever remembered an experience differently from how it actually happened? What are some reasons why two individuals could remember the same event in very different ways? Can we trust the “facts” in our memories?

8. Throughout the book, Shields praises the essay and the self-reflexive documentary film. What do these two forms have in common? In your opinion, what makes these forms so appealing to Shields’s aesthetic?

9. Before reading Reality Hunger, had you ever read any of David Shields’s other books, such as Remote, Black Planet, The Thing About Life is That One Day You’ll Be Dead, or Enough About You? What links these books? How have these previous books pointed the way toward Reality Hunger?

10. On the surface, a reality TV program and a memoir seem to have little in common. However, Shields makes connections between these and other works of art and entertainment. How does Shields’s concept of “reality” and the “real” serve to illustrate these connections? Can you identify any ways in which a reality TV program and a published memoir are similar? It what ways do they differ? Why are both so popular these days?

11. Shields is critical of the traditional novel as a contemporary art form. In the chapter “Books For People Who Find Television Too Slow,” he writes, “Painting isn’t dead. The novel isn’t dead. They just aren’t as central to the culture as they once were.” Do you agree with this statement? Shields began his writing career as a novelist. Why do you think Shields at this point is so critical of the novel as a genre?

12. Over the last half-decade, social networking sites such as Facebook and MySpace have emerged as a major new communications technology. In the “Hip-Hop” chapter, Shields calls Facebook a “crude personal essay machine.” In what ways is a person’s Facebook page similar to an essay about the self? What can and cannot be learned about a person through his or her social network page?

13. Has this book changed your attitudes toward collage art, sampling, and artistic assimilation? If so, how and why has your opinion changed? If your feelings have not changed, why not?

14. Discuss the role autobiography plays in the book, in particular the “DS” chapter. Did this chapter change your understanding of the book as a whole?

15. The book’s penultimate chapter, “Manifesto,” ends with the line “Never again will a single story be told as though it were the only one.” What does this statement mean to you? Why did Shields place this line in such a prominent place in the book?

Learn More About Reality Hunger
print
Back to Top