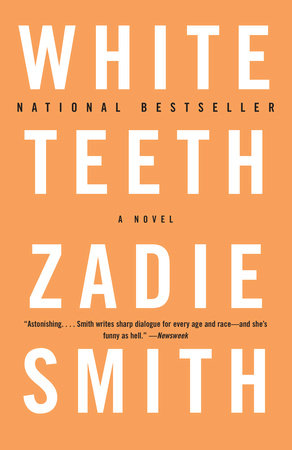 The questions and author biography that follow are intended to enhance your group’s discussion of Zadie Smith’s White Teeth, a funny, generous, big-hearted novel dealing–among many other things–with friendship, love, war, three cultures, three families over three generations, and the tricky way the past has of coming back and biting you on the ankle. It is a life-affirming, riotous, must-read of a book.

The story begins on New Year’s morning 1975 when Archie Jones, disheartened by a failed marriage, seals up the windows of his car and waits for the exhaust fumes to end his life. Archie’s suicide is interrupted by a Muslim butcher who is enraged that someone would commit such an unholy act while parked in front of his shop (blocking his driveway as well). Relieved at being rescued from his own suicide, Archie attends a party later that day and meets Clara Bowden–an unusually tall, gorgeous Jamaican woman who has been raised as a Jehovah’s Witness. Archie soon marries the much younger Clara, and they have a daughter named Irie. As time goes on, their lives intertwine with those of Archie’s old friend Samad Iqbal, a Bengali immigrant who served with him in World War II, his wife, Alsana, and their twin sons, Magid and Millat.

An overeducated waiter in a curry restaurant, Samad is a devout Muslim who laments the fact that his sons are growing up in a secular culture with no regard for religious traditions. Though he himself often gives in to temptation–he drinks and has an extended affair with his sons’ music teacher–he decides to send Magid, the more serious and scholarly of his boys, to Bangladesh to be raised by relatives. Since Samad hasn’t cleared this with Alsana, he spends the next decade or so living with a wife who refuses to speak with him. Millat grows into an irreverent, pot-smoking teenager who eventually joins a militant Muslim movement that will bring him into direct opposition to his returned brother, Magid, who is deeply involved with a widely publicized experiment in genetic engineering. Irie’s future is linked ultimately to both of the Iqbal brothers, as races mix and bloodlines merge in this dazzling comedy of assimilation and its discontents.

1. White Teeth has generated enormous interest within the publishing world, in part because it is an unusually assured first novel, produced by a writer who is still very young. What aspects of White Teeth–in terms of either style or content–strike you as most unusual in a debut novel? How is White Teeth different from other first novels you have read?

2. A few days before Archie tries to kill himself because his first wife has left him, Samad tries to console him: "You have picked up the wrong life in the cloakroom and you must return it . . . there are second chances; oh yes, there are second chances in life" [p. 11]. Does Archie’s marriage to Clara constitute a second chance that improves greatly upon the life he had before he met her? Why does the chapter title call the marriage "peculiar" [p. 3]?

3. Why does Archie like to flip a coin in moments of indecision? What does it say about him as a person? How does the opening epigraph, from E. M. Forster’s Where Angels Fear to Tread [p. 1], relate to Archie and his approach to life? Does chance play a more powerful role than will or desire in determining events for other characters in the novel too?

4. Archie "was a man whose significance in the Greater Scheme of Things could be figured along familiar ratios: Pebble: Beach. Raindrop: Ocean. Needle: Haystack" [p. 10]. Does the fact that Archie is so humble, so lacking in ambition or egotism, make him a more comical character than the serious and frustrated Samad? Is Samad’s character ultimately funny as well?

5. Samad imagines a sign that he would like to wear at his restaurant job, a sign that proclaims "I am not a waiter. I have been a student, a scientist, a soldier . . ." [p. 49]. Why, in all the years that pass during the novel, does Samad not pursue another job? Is it surprising that Samad doesn’t seek to change his life in more active ways? Does Islam play a part in this issue?

6. Why is what happened to Samad and Archie during the war more meaningful to them than anything that will happen in their later lives? Why does Samad expect Archie to kill Dr. Sick for him? What exactly has happened in this village–what has the doctor been doing there? Why does Samad feel that the doctor must die? Would it have been out of character for Archie to execute this man?

7. The narrator notes that "it makes an immigrant laugh to hear the fears of the nationalist, scared of infection, penetration, miscegenation, when this is small fry, peanuts, compared to what the immigrant fears–dissolution, disappearance" [p. 272]. Magid and Millat both shirk their Asian roots, though in different ways. Magid begins to call himself Mark Smith while he is still a schoolboy, while Millat models himself on Robert De Niro’s character Travis Bickle in the film Taxi Driver. Irie, on the other hand, is drawn to what she imagines is the "Englishness" of the Chalfens. Is the gradual loss–or active rejection–of one’s family heritage an unavoidable consequence of life in a culturally mixed environment?

8. Samad and his wife, Alsana, had a traditional arranged marriage in Bangladesh. Is love irrelevant in a relationship such as theirs? Does the novel indicate that love is a simpler issue for those of the younger generation, who are sexually and emotionally more free to pursue their desires?

9. What is the effect of juxtaposing Alsana with Neena, her "Niece-of-Shame," who is an outspoken feminist and lesbian? Why is Neena one of the novel’s most pragmatic–and therefore contented–characters? Why does Alsana ask Neena to act as an intermediary with the Chalfens for Clara and herself?

10. What opportunities for self-expression and community does the sparsely attended but lively pub run by Abdul Mickey offer? Does Smith use the pub as a sort of stage for the everyday comedy and the various ironies of ethnic identity and assimilation in North London? What is funny about the timeline on page 204?

11. Fed up with her own family, Irie goes to stay with her grandmother Hortense, and begins to piece together the details of her ancestry. Does what she learns about her family’s history make a difference in her sense of identity or in her ideas about the direction her life should take?

12. What effect does the introduction of the educated, middle-class Chalfen family have on the novel? Why is it significant that Marcus Chalfen comes from a Jewish background? Why are the Chalfens so patronizing toward the Iqbals and the Joneses? Considering Joyce’s relationship to Irie and Millat, what is wrong with the liberal sentiments that the Chalfens represent?

13. Why does Smith include an episode in which Millat travels to Bradford with other members of KEVIN to burn copies of Salman Rushdie’s The Satanic Verses? Does the fact that none of the boys have actually read the book make their ideological zeal more comical, or more frightening?

14. Why does Smith set up the circumstances of Irie’s pregnancy so that it will be impossible for her to know which of the twins is the child’s father? How does what we learn about Irie and her daughter on the novel’s final page relate to the genealogical chart that appears on page 281?

15. Various characters, from various families in the novel, collide in the novel’s climactic scenes leading up to the FutureMouse convention. What are the motivations and beliefs that have put these characters in conflict? Do the issues of religion, science, and animal rights relate to the novel’s interest in personal fate and family history?

16. In an interview, Smith says of White Teeth, "I wasn’t trying to write about race. . . . Race is obviously a part of the book, but I didn’t sit down to write a book about race. The ‘Rabbit’ books by Updike . . . I could say that [these are] books about race. [Those are] book[s] about white people. [They are] exactly book[s] about race as mine is. It doesn’t frustrate me. I just think that it is a bizarre attitude. So is [it that] a book that doesn’t have exclusively white people in the main theme must be one about race? I don’t understand that."* What are some of the indications in White Teeth that Smith is not as interested in race as she is the juxtaposition and interaction of people from different ethnic groups living their daily lives?

17. Do the children of Archie and Samad experience their ethnic or racial identities in different ways than their parents do? If so, why? Is Smith suggesting that there is a rising trend in intermarriage between members of different races and ethnicities, so that these issues become of less interest, or meaning, as time passes? Is Alsana right when she says, "you go back and back and back and it’s still easier to find the correct Hoover bag than to find one pure person, one pure faith, on the globe" [p. 196]?

18. With White Teeth, Zadie Smith shows herself to be a brilliant mimic of the sounds of urban speech. In which parts of the novel does she display this skill to the greatest effect? How does her prose style work to convey the busy, noisy soundscape of a multicultural metropolis?

Half-Truths and Semi-Miracles
Back to Top