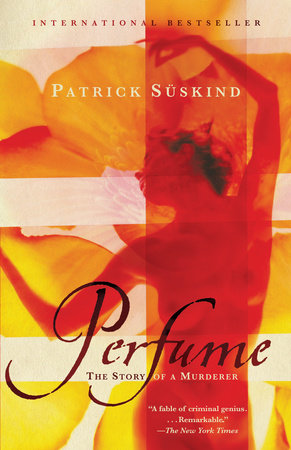 The introduction, discussion questions, and suggested reading list that follow are intended to enhance your group’s reading and discussion of Patrick Süskind’s Perfume. We hope they will provide you with a variety of approaches to this vividly imagined historical novel. Set in eighteenth-century France, Perfume explores the evolution of a remorseless killer during an era of intense contradictions, an age in which poverty, filth, and superstition coexisted uneasily with the Enlightenment’s ideals of progress, liberty, and reason.

The novel’s protagonist, Jean-Baptiste Grenouille, begins and ends his life at the Cimetière des Innocents. But in the meantime, a most unusual—and unbelievable—life unfolds. Born with no odor of his own, Grenouille soon develops a sense of smell capable of almost supernatural olfactory distinctions. He wanders the reeking streets of Paris, absorbing thousands of scents, until one day he is irresistibly drawn to an odor of "pure beauty," a scent that he feels will provide the principle for ordering all the others. The source is an adolescent girl, and Grenouille coldly kills her in order to possess her smell. After getting away with the murder, he goes to work for the perfumer Baldini and quickly reveals a genius for creating fragrances of unsurpassed subtlety and allure. He makes his master rich, but his contempt for mankind drives him into the wilderness, away from the smell of humans, and he spends seven years in a cave beneath France’s loneliest mountain. When he emerges, he travels to Grasse, the center of the perfume industry, where he learns how to distill the essential scents of objects, animals and, ultimately, of humans. Here he creates for himself an arsenal of odors which he manipulates in order to make himself unnoticeable, repellent, or pitiable. But he is driven to an even greater goal and begins a ghastly series of murders, robbing the most beautiful virgin girls in the town of their scents to concoct a perfume capable of making everyone, even the father of one of his victims, love and revere the wearer. Whether such powers will save him from his own self-destructive emotions is not revealed until the novel’s harrowing final pages. A story in which the trajectories of genius, obsession, and cruelty come together in one extraordinary character, Perfume offers a fascinating look at the seething underside of the Age of Reason.

1. Jean-Baptiste Grenouille is born in a food market that had been erected above the Cimetiere des Innocents, the "most putrid spot in the whole kingdom" [p. 4]. He barely escapes death at his birth; his mother would have let him die among the fish guts as she had her four other children. But Grenouille miraculously survives. How would you relate the circumstances of his birth to the life he grows up to live?

2. When the wet nurse refuses to keep Grenouille because he has no smell and therefore must be a "child of the devil" [p. 11], Father Terrier takes him in. But he is exasperated. He has tried to combat "the superstitious notions of the simple folk: witches and fortune-telling cards, the wearing of amulets, the evil eye, exorcisms, hocus-pocus at full moon, and all the other acts they performed" [p. 14]. In what ways can Perfume be read as a critique of the eighteenth century’s conception of itself as the Age of Reason? Where else in the novel do you find rationality being overcome by baser human instincts?

3. Throughout the novel, Grenouille is likened to a tick. Why do you think Süskind chose this analogy? In what ways does Grenouille behave like a tick? What does this analogy reveal about his character that a more straightforward description would not?

4. Grenouille is born with a supernaturally developed sense of smell. He can smell the approach of a thunderstorm when there’s not a cloud in the sky and wonders why there is only one word for smoke when "from minute to minute, second to second, the amalgam of hundreds of odors mixed iridescently into ever new and changing unities as the smoke rose from the fire" [p. 25]. He can store and synthesize thousands of odors within himself and re-create them at will. How do you interpret this extraordinary ability? Do you think such a sensitivity to odor is physically possible? Do you feel Süskind wants us to read his novel as a kind of fable or allegory? Why do you think Süskind chose to build his novel around the sense of smell instead of one of the other senses?

5. What motivates Grenouille to commit his first murder? What does he discover about himself and his destiny after he has killed the red-haired girl?

7. The perfumer Baldini initially regards Grenouille with contempt. He explains, "Whatever the art or whatever the craft—and make a note of this before you go!—talent means next to nothing, while experience, acquired in humility and with hard work, means everything" [p. 74]. And yet Grenouille is able to concoct the most glorious perfumes effortlessly and with no previous experience or training. What do you think the novel as a whole conveys about the relationship between genius and convention, creativity and destruction, chaos and order?

8. The narrator remarks, "Odors have a power of persuasion stronger than that of words, appearances, emotions, or will. The persuasive power of an odor cannot be fended off, it enters into us like breath into our lungs, it fills us up, imbues us totally. There is no remedy for it" [p. 82]. Do you think this is true? Why would an odor have such power? In what ways does Grenouille use this power to his advantage?

9. Some reviewers have claimed that the Süskind’s writing in Perfume is "verbose and theatrical," while others have described it as "sensuous and supple." Clearly, the writing is more extravagantly imaginative than the pared down minimalism of much recent American fiction. How do you respond to Süskind’s prose? How do you respond to the critical reactions outlined above?

10. Grenouille is introduced as "one of the most gifted and abominable personages in an era that knew no lack of gifted and abominable personages" [p. 3]. Does Süskind manage to make him a sympathetic character, in spite of his murders and obsessions? Or do you find him wholly repellent? How might you explain Grenouille’s actions? To what extent do his experiences shape his behavior? Do you think he is inherently evil?

11. When Grenouille emerges from his self-imposed seven-year exile, he is brought to the attention of the marquis de La Taillade-Espinasse, whose theory that "life could develop only at a certain distance from the earth, since the earth itself constantly emits a corrupting gas, a so-called fluidum letale, which lames vital energies and sooner or later totally extinguishes them" [pp. 139 – 140] seems to explain Grenouille’s sad condition. This theory also contends that all living creatures therefore "endeavor to distance themselves from the earth by growing" upwards and away from the earth [p. 140]. What attitudes and beliefs is Süskind satirizing through the character of Taillade-Espinasse?

12. Grenouille becomes, toward the end of the novel, a kind of olfactory vampire, killing young women to rob them of their scents. "What he coveted was the odor of certain human beings: that is, those rare humans who inspire love. These were his victims" [p. 188]. Why does he need the scents of these people?

14. After Grenouille leaves the town of Grasse, where he has caused so much death and suffering, his case is officially closed and we’re told, "The town had forgotten it in any event, forgotten it so totally that travelers who passed through in the days that followed and casually inquired about Grasse’s infamous murderer of young maidens found not a single sane person who could give them any information" [p. 247]. Why do the townspeople react this way? Why isn’t it possible for them to integrate what has happened into their daily consciousness?

15. How do you interpret the novel’s ending, as Grenouille returns to the Cimetiere des Innocents and allows himself to be murdered and eaten by the criminals who loiter there? What ironies are suggested by the narrator’s assertion that Grenouille’s killers had just done something, for the first time, "out of love" [p. 255]?

16. Perfume is set in eighteenth-century France and tells an extravagant story of a man possessed with a magical sense of smell and a bizarrely destructive obsession. Do its historical setting and fantastic elements make it harder or easier to identify with? What contemporary issues and anxieties does the story illuminate?

Patrick Süskind was born in Ambach, near Munich, in 1949. He studied medieval and modern history at the University of Munich. His first play, The Double Bass, was written in 1980 and became an international success. It was performed in Germany, in Switzerland, at the Edinburgh Festival, in London, and at the New Theatre in Brooklyn. His first novel, Perfume became an internationally acclaimed bestseller. He is also the author of The Pigeon and Mr. Summer’s Story, and a coauthor of the enormously successful German television series Kir Royal. Mr. Süskind lives and writes in Munich.
Learn More About Perfume
print

The Woman in Black
Back to Top