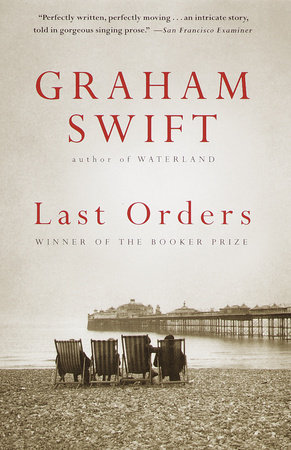 "A beautiful book…a novel that speaks profoundly of human need and tenderness. Even the most cynical will be warmed by it."–San Francisco Chronicle

The questions, discussion topics, and author biography that follow are intended to enhance your group’s reading of Graham Swift’s Last Orders. We hope they will enrich your experience of this brilliant and challenging new novel, the winner of Britain’s prestigious Booker Prize.

The central event of the novel is the laying to rest of the remains of Jack Dodds, family butcher, who has left instructions that he wants his ashes scattered off the end of a pier in Margate, a faded resort on England’s southeast coast. Three friends and his adopted son gather in a pub to drive down to Margate to carry out Jack’s wishes. As Vic, Lenny, Ray, and Vince make their desultory progress from south London to the sea, the reader gets to know them intimately, and becomes aware of the web of connections between them–animosities, loves, secrets, and lies. In short, the accumulation of detail amounts to a realistic portrait not only of Jack Dodds and his friends, but also of life itself, as experienced by a particular generation and class of Londoners.

Four men gather in a London pub. They have taken it upon themselves to carry out the last orders of Jack Dodds, master butcher, and deliver his ashes to the sea. As they drive towards the fulfillment of their mission, their errand becomes an extraordinary journey into their collective and individual pasts. Braiding these men’s voices, and that of Jack’s widow, into a choir of sorrow and resentment, passion and regret, Swift creates a testament to a changing England and to enduring mortality.

2. Last Orders has an unusual narrative structure: in each section characters speak for themselves, recounting past and present actions. There is no omniscient narrator, no stand-in for the author, no one who knows more than any one character. What effect does this narrative structure have upon your experience as a reader? What happens to your expectation of the traditional "exposition"-being filled in, at the outset of a novel, on setting, character, and what has happened before? How do you, as the reader, gather and sort through information given by each of the speakers?

3. In addition to the characters who are engaged in the novel’s main action, there are three other narrators: Jack’s widow Amy, Vince’s wife Mandy, and Jack himself. What does the addition of these three contribute to the building up of the story? Are they necessary, and if so, why?

4. Given that the narrative point of view is shifting and necessarily subjective, how does Graham Swift give Ray a different status from the other narrators? Do you find as a result that you feel closer to, or more sympathetic with, Ray’s experience than any of the others?

5. What is the relationship between what the characters do for a living and the alternative careers they wished for, but did not take up? How is "what might have been" an issue in the lives of each of the characters in the novel, including the women?

6. The carrying on of the family business is important to Jack Dodds: he has followed in the path of his father, but his adopted son, Vince, refuses to join him in "Dodds & Son, Family Butchers." Why is it so vital to Jack that Vince join him, and why is it so vital to Vince that he resist? What other causes are there for the difficulties between Jack and Vince?

7. Jack, Lenny, Ray, and Vince each has a single daughter. Jack’s daughter, June, has been institutionalized from a very early age and he has never visited her; Ray’s daughter lives in Australia and he hasn’t heard from her in years; Lenny’s daughter, Sally, is now a prostitute married to a jailbird; Vince has pimped his daughter to a rich Arab businessman. Why have these men failed so miserably in their relationships with their daughters? Do you suppose that they might have managed relationships with sons better?

8. The friendship between Jack and Ray was forged in North Africa in World War II. Lenny, too, served in the war and still thinks of himself as "Gunner Tate." Vic served in the navy, and the trip to Margate includes a stop at the Naval Monument at Chatham. How has the memory of the war shaped how these men think of themselves? Is their shared experience of war partly the reason for their friendship? Does having lived through the war create a barrier between them and their children’s generation?

9. If Vince and Lenny are the most unhappy characters in the novel, why do you think they’ve become this way? How is their unhappiness translated into anger and violence? What is the effect of the fight between them-comic? ludicrous? a relief? Does it change anything?

10. How has Vic’s profession shaped his personality? How does Vic differ from the other characters?

11. We can think of the place names at the head of certain sections as a dotted line on a map of England: they mark the progress of the friends as they make their way to Margate. The fact that they stop at Canterbury Cathedral reminds us that in his Canterbury Tales Chaucer, too, chose to have his pilgrims tell stories and talk about themselves as they made their way along the road to Canterbury. In what ways is the journey in Last Orders like a pilgrimage? What sort of knowledge or illumination results from this trip?

12. In the opening scene of the novel, Ray compares the Coach pub to a church, with the bottles ranged like organ pipes above the bar. Later, the characters find themselves in Canterbury Cathedral. What, if any, are the connections in this novel between the pub and the cathedral? What moods andor revelations does each place nurture or inspire? How does the novel make us meditate upon the relationship between the mundane and the spiritual?

13. Why does Graham Swift locate Jack’s butcher shop directly across the street from Vic’s funeral home, so that the two shops mirror each other? How do images of meat, bodies, and ashes create a web of meaning in the novel?

14. Jack is present, corporeally speaking, in the jar of ashes as his friends take him down to the seaside. How does Jack’s presence elicit comedy in the novel? Tenderness? How does the handling of the jar tell us about the power of friendship?

15. Why does Vince, against the wishes of the others, scatter some of the ashes over the hill at Wick’s Farm? Why does this place have a particular meaning for him, so that this becomes a necessary and fitting action?

16. Consider Graham Swift’s handling of time in this novel. In approximately what year is the novel’s "present" action taking place? How much time has passed since the affair between Ray and Amy? What are some other instances in which specific remembered events work to build up the reader’s sense of time passing in the lives of these characters? By the end of the novel, would you be able to situate roughly all of its events on a time line?

17. Swift’s challenging narrative structure illuminates the problem of partial knowledge: as readers, we discover only gradually, and in bits and pieces, information we need in order to understand the characters and their histories. We have no more insight than the characters themselves, and come to the same dawning realizations that they do, at the same time. At times this effect is the result of crucial information being held back. Which characters conceal important information from others, and why? How is this issue of partial knowledge–and the keeping of secrets and the telling of lies–important to the overall plan and meaning of the novel?

18. How successful are the marriages and love relationships in this novel? What are the limits to understanding between men and women? Is love a redemptive force here, or merely a painful misunderstanding, a botched effort? Do we wish to believe that Amy and Ray will take up their love affair again, now that Jack is gone and Amy has decided to stop visiting June?

19. Ray’s friends depend upon his luck-or skill-in betting on horses when they need ready cash, usually because of major crises in their lives. How large a role does random fortune play at these moments? What does it mean to be "lucky" in this novel?

20. In a novel in which each character speaks without the intervention of a narrator, the issue of individualized voices becomes crucial. How do you come to distinguish the characters’ voices? How successful is Swift in differentiating between voices? How important is the role of British slang in creating the illusion of reality in this novel?

21. Consider the first epigraph (from the seventeenth-century writer Sir Thomas Browne) that Swift has chosen for his novel: "But man is a Noble Animal, splendid in ashes, and pompous in the grave…" Do you read this epigraph ironically or seriously? What does your choice indicate about your response to the overall effect of the range of detail and meaning in this novel, from the tawdry to the profound?

Graham Swift was born in south London, not far from Bermondsey, where the characters in Last Orders live. His father was a civil servant who had served as a naval pilot in World War II; Swift’s mother lived through the bombing of London. Though he was born in 1949, most of Graham Swift’s fiction touches upon War World II in some way while exploring the larger subject of history, its meaning and its effects upon those who live it. He began writing stories in his teens; he graduated from Cambridge University and taught English literature at various colleges until he became a full-time writer in 1983. His novels have won a variety of prestigious literary awards and have been widely translated. Waterland became a major film, starring Jeremy Irons and Sinead Cusack. An avid fisherman, Graham Swift has also co-edited an anthology of fishing in literature. He lives in London.

There But For The
Back to Top