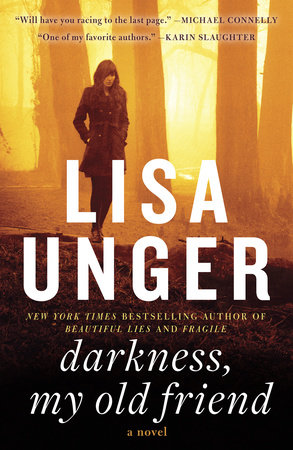 The questions, discussion topics, and suggestions for further reading that follow are designed to enhance your group’s discussion of Lisa Unger’s extraordinary novel, Darkness, My Old Friend, which Michael Connelly hailed as a “book that will have you racing to the last page, only to have you wishing the ride wasn’t over.”

Willow Graves has moved from New York City to The Hollows with her recently divorced mother. At fifteen, Willow regards the quiet suburban town as a social and cultural wasteland populated by boring, small-minded people. Jones Cooper has spent his whole life in The Hollows; a retired cop married to a psychologist, Jones is struggling to come to grips with the troubles that led to his early departure from the police department. For Michael Holt, The Hollows represents the event that haunts his life—his mother’s inexplicable disappearance when he was a teenager. Now he’s back in town and has enlisted local psychic Eloise Montgomery to help him solve the mystery. As their paths cross and collide, they all come face-to-face with the town’s dark history and the darkness within their own hearts.

1. Why is Jones drawn into the conversation with Eloise despite his initial impatience and skepticism? In what ways does Eloise’s demeanor and her explanation of her psychic experiences influence his—and the reader’s—response to her and her message?

2. What underlies Willow’s provocative behavior toward her teacher, Mr. Vance, and her boast that “here she was a freak and proud of it” [pp. 28]? Is her behavior understandable—perhaps even inevitable—for a teenager trying to adjust to an unfamiliar place?

3. How would you describe the relationship between Willow and her mother, Bethany? Are they more attuned to each other than most teenage daughters and their mothers? Do Bethany’s own vulnerabilities and doubts influence her treatment of Willow?

4. What does the session with his therapist reveal about how Jones defines himself [p. 54-61]?

5. Is his resistance to therapy typical of a man his age and circumstances? What impact do his conversations with Maggie have on his feelings about the value of therapy [p. 81-84; p.90-93]? Are there similarities between the skills of a therapist and those of a detective?

6. “On bad days—and there were many really, truly bad days—it was a curse.  On the good days, it was a gift” [p. 68]. What techniques or attitudes has Eloise developed to help her deal with the sudden intrusion of psychic events in her everyday life?  Is she right to share her visions even though their messages are difficult to interpret and act upon?

7. Compare Michael Holt’s behavior during meeting with Bethany [pp. 75-78] and his manner and thoughts as he tries to piece together the truth about what happened to his mother [pp. 94-108]. What do these scenes show about the way his mind works?  How does the author manage to simultaneously stimulate the reader’s curiosity, empathy, and suspicions?

8. Unger introduces the coldly calculating Kevin Carr in the preface. A fuller picture of him and his marriage comes to light through his wife, Paula [pp. 157-170].  What does Unger achieve by using this device? In what ways do Paula’s questions and uncertainties about Kevin represent the larger concerns of the novel?

9. Darkness, My Old Friend offers two different perspectives on parenting: Dr. Maggie Cooper tells Bethany, “It’s always our instinct to feel like we’ve failed when our kids are suffering. But it’s not always our fault,” while Bethany believes that “parents were responsible for their kids, plain and simple” [p. 183]. How do these views apply to the following sets of parents and children: Willow and Bethany; Eloise and her daughter, Amanda; Michael and his mother and father; Cole and his mother, Robin; his father, Kevin; and his stepmother, Paula; and Jones, who harbors guilt and uneasiness about his “sick relationship with his mother” [p. 56]?

10. During therapy with Maggie, it emerges that  “For years Willow had been telling little lies to friends and her parents about meaningless things…. She liked the thrill of it, the making up of events…the reactions she got” [p. 256].  What are the ramifications, both positive and negative, of her tendency to make up stories?

11. What was your reaction when you found out what happened to Marla Holt?  As she weaves together the separate threads of the novel, does Unger give hints to the solution?

12. We learn a lot about the characters through flashbacks and  “back stories” interspersed in the chapters devoted to their present-day situations and actions. What effect does this have on the pace of the novel and the development of the reader’s sympathies?

13. What do the descriptions of the natural landscape, the older parts of the town, and the new developments capture about suburban America? In what ways does the physical environment help establish the ambience of the community?

14. Unger’s portrait of Eloise offers a fascinating and unusually intimate look at the inner world of a psychic. What do Eloise’s own words and musings (p. 24, pp. 193-198, p. 238, p. 302, for example) the comments and observations Ray Muldune, Jones, and others throughout the book, and the vivid psychic event toward the end (p. 299) convey about the challenges, as well as the satisfactions, her work provides?

15. From the Greek mythological figure Cassandra, to Oda Mae Brown in the movie Ghost, psychics have long been featured in works of fiction, television, and film. According to newspaper accounts, they have also played a role in real-life crime solving. What accounts for the continuing interest in psychic experiences and powers?

16. Discuss the literal and metaphorical resonance of the novel’s title. Which of the characters embrace darkness as friend, and why?

17. Darkness, My Old Friend is set in the same town and has many of the same characters as the author’s bestselling Fragile. If you’ve read Fragile, in what ways does Darkness develop and extend the themes of that novel?  Do the behavior and relationships portrayed in Darkness change your impressions of and feelings about Jones, Maggie, and Eloise?  Would you like to read another novel set in The Hollows?  If so, which characters would you like to learn more about?

Lisa Unger is an award-winning New York Times and internationally bestselling author. Her novels have sold over one million copies in the United States and have been translated into twenty-six different languages.

Until You’re Mine
Samantha Hayes

The Girl Before
Rena Olsen

In the Dark
Cara Hunter

Into the Black Nowhere
Meg Gardiner

The Woman Inside
E. G. Scott

She Lies in Wait
Gytha Lodge

The Burning Air
Erin Kelly
Back to Top