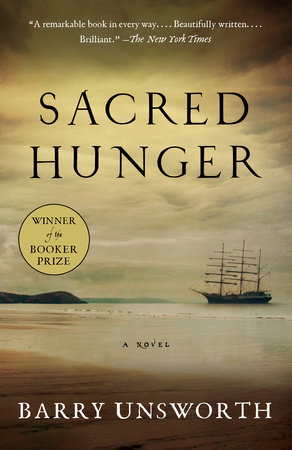 The questions, discussion topics, and reading list that follow are intended to enhance your reading group’s discussion of Sacred Hunger, the Booker Prize winning novel by Barry Unsworth.

A historical novel set in the eighteenth century, Sacred Hunger is a stunning, engrossing exploration of power, domination, and greed in the British Empire as it entered fully into the slave trade and spread it hroughout its colonies. Barry Unsworth follows the failing fortunes of William Kemp, a merchant pinning his last chance to a slave ship; his son who needs a fortune because he is in love with an upper-class woman; and his nephew who sails on the ship as its doctor because he has lost all he has loved. The voyage meets its demise when disease spreads among the slaves and the captain’s drastic response provokes a mutiny. Joining together, the sailors and the slaves set up a secret, utopian society in the wilderness of Florida, only to await the vengeance of the single-minded, young Kemp.

1. List the main characters in the first part of this book. Describe each of their motivations or the circumstances that led to their involvement in the slave trade, whether as traders, laborers, slaves, or “bystanders.” How many of these motivations seem financial? How many seem emotional or personal? Who does the slave trade benefit, and how? Who does it exploit, and how? What connections can you find between seemingly disparate groups of people?

2. Early in the book, we see that Erasmus is a bad actor. (Note: What play are Erasmus and his friends rehearsing?) In what other ways do we see Erasmus’s inability to “act”? What does this unwavering straightforwardness say about Erasmus? How does it help and hinder him throughout the novel?

3. What does this book say about the objectivity of law, government, science, and religion? Think of instances in the book when the author calls these institutions into question. How would you characterize Paris’s views of law, religion, and science? How do they differ from Erasmus’s views?

4. Describe the tactics that Delblanc, the founding father of the settlement, used to create a community? How did he use elements of political revolution and religious resurrection to form the settlement? Why, for example, was it essential that the settlers kill the slave traders who had kidnapped the Indians?

5. What ways had the settlement developed to maintain a community? What were some of the essential ground rules that were established? What were the roles of storytelling and myth?

6. Think about the way the “pidgin” language is used around the settlement. Why is this important? When some characters would slip into standard English, how would this affect relationships? Can you think of examples when the actual language and words used to discuss issues and problems affect these problems?

7. In more than one instance, Paris is accused of thinking too “generally” (with Nadri) or not seeing the “real world” (with Kireku). What do you think of the ideas that Paris is stating in these conversations? Is it futile to establish general laws of humanity?

8. Consider the various notions of justice in the book: Erasmus’s ideas of justice as vengeance; Thurso’s shipboard justice; Paris and Delblanc’s visions; the mock trial in the London jail. How do these definitions of justice differ? How do some of them break down?

9. Think about the aphorism “Power corrupts; absolute power corrupts absolutely.” What does Unsworth say about the nature of power? Does Unsworth believe that there are some people who “naturally” are powerful and some people who are by nature weak? Delblanc paints a portrait of a man in power. What does Delblanc’s portrait indicate about Unsworth’s notions of the effects of power?

10. Consider the relationship between race and power in Sacred Hunger. How did Thurso and the shipmates attempt to maintain control over the slaves that they took, even when they were vastly outnumbered? How are Unsworth’s visions of power and control as they relate to race relevant today?

11. During his time on the ship, Paris is translating a scientific work about the circulatory system of the human body. Think about ways in which the author uses this biological metaphor to illuminate other systems at play in the novel. How is the slave trade, and the economic and social factors involved, depicted as a kind of circulatory system? What are the channels of this system? Who is being served or fed by this system? What is the author saying about the nature of human connectivity with this metaphor?

BARRY UNSWORTH, who won the Booker Prize for Sacred Hunger, was a Booker finalist for Pascali’s Island and Morality Play and was long-listed for the Booker Prize for The Ruby in Her Navel. His other works include The Songs of the Kings, After Hannibal, Losing Nelson, and Land of Marvels.

The Land Beyond the Sea
Sharon Kay Penman

The Watermen
James A. Michener