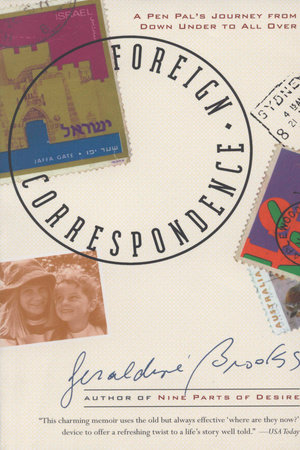 We are products of our environment. And some of us rebel against that environment–perhaps traveling the world and then living far from home if we grew up in a place that felt too small, or creating a cocoon of family and friends if our childhood was full of upheaval.

In her memoir, Foreign Correspondence, we see how author Geraldine Brooks rebels against and then embraces her secure and rooted upbringing in suburban Sydney, Australia. Brooks becomes a foreign correspondent who travels from war zone to famine and finally arrives at a deeper understanding of the value of family, home, and stability in every person’s life. She tells that story in a way that carries her distinct stamp: she looks at the lives of others.

Throughout her childhood in the turbulent 1960s and 1970s (turbulent almost everywhere but Australia it seemed to a young Brooks) she corresponded with pen pals around the world. More than twenty years later, Brooks is surprised to find that her father has saved those letters. After reading them, she wonders what became of those childhood correspondents, and she decides to find out. Traveling from Maplewood, New Jersey, to Nazareth, Israel, to St. Martin de la Brasque, France, to a New York City nightclub, Brooks tracks down her pen pals. While doing so she hears stories that cross latitudes and include tales of conscription, anorexia nervosa, peace, security, death, provincialism, and family. She also learns that she and her former correspondents, all grown up now, want many of the same things, and most have little to do with the excitement that she craved when she was a young girl. As Brooks writes of her former pen pals, "[O]ne of them is dead, one is famous, one has survived wars, one overcome prejudice. And of all of them, it is Janine, living undramatically in the narrow circumference of her tiny village, whose life now seems to me most enviable."

Brooks’ former work as an award-winning foreign correspondent for The Wall Street Journal and her personal travels, from Sydney, Australia, to making her current home with her husband and son in Waterford, Virginia, give her a second sight that many outsiders possess. She writes a tale that is at the same time personal and universal. She opens windows. She amuses. She enlightens.

1. Discuss Brooks’ choice to structure the book in two parts, and not to tell the story in straight chronology. What are the benefits of these choices? Are there any drawbacks?

2. In what ways did the geography of place affect Brooks?

3. Brooks was an outsider, a loner, an observer–as shown by events ranging from her childhood rheumatic fever, which often separated her from schoolmates, to living "down under," to coming of age on the cusp of the feminist movement. Is this feeling of "otherness" essential to a writer? To this writer?

5. Australians have an instinctual need to leave their island and explore the world. Discuss this as a theme in Brooks’ memoir.

6. Australian men have a deep and particular relationship with their male friends, their mates, as described by Brooks and others. Compare and contrast this with the idea of women’s friendships in the United States, which are often cited as different and deeper than men’s friendships.

7. Discuss Brooks’ religious upbringing and why you think she converted to Judaism. Did her childhood experiences foreshadow the conversion to come?

8. Brooks comes to a gradual realization that Australia is not so small a place after all. How does this compare or contrast with American myths of exploration and home?

9. In what ways does the Australian "Cultural Cringe" syndrome mirror the more personal cringe that many children, especially teens, feel about their parents and their brothers or sisters?

10. Brooks writes that she "had more years of shared confidences with Joannie than with any of my mates in Sydney." Would their relationship have been less important if they had not developed it through writing only? In what ways? In your experience, does the act of writing letters make a friendship stronger?

11. Do you think e-mail has changed the pen pal experience for kids? In what ways?

12. Assume you have to choose one or the other, which is preferable–to grow up in a restricted environment with no car, with no travel, and with curfews and strict limits? Or to travel widely and experience many different cultures and have more responsibility and opportunity at an earlier age? Talk about the benefits and drawbacks of each.

13. Discuss Brooks’ identification with Joannie–her observation that she’s living the life Joannie was meant to lead.

14. Does Brooks follow or disregard (personally and professionally) the advice she received from a veteran correspondent, "Never get in the middle. You have to choose your side." How does the author feel about the middle?

15. When Brooks is in the French village of St. Martin, visiting Janine, do you suspect that she will ultimately identify so strongly with her?

16. Brooks confesses that she felt an "inevitability" about leaving Australia. Do you also think it’s inevitable that she’ll go back and live in Australia with her husband and son?

17. Brooks’ father kept secrets from her for a long time. How might she have felt if she learned about her father’s other daughter at an earlier age? Do you think he made the right choice in keeping it from her for so long?

18. Talk about the "happiness set point." In what ways do you essentially agree with or question this theory of human behavior?

Geraldine Brooks is also the author of Nine Parts of Desire: The Hidden World of Islamic Women and former foreign correspondent for The Wall Street Journal where she reported on wars and famines in the Middle East, Bosnia, and Africa. A native of Australia and a graduate of Sydney University and the Columbia University Graduate School of Journalism, she currently lives in Virginia with her husband and young son. As Brooks tells it, "Unless civil war breaks out for a second time in Virginia, it is unlikely that I will ever see a battlefield again. These days I don’t cover uprisings or get arrested on suspicion of espionage. I bake bread, piece quilts, turn the compost heap and sit on the porch, rocking my son to sleep….A letter can find me here with just the name of the village as an address."
Learn More About Foreign Correspondence
print

Time to Be in Earnest
P. D. James

Here We Are
Benjamin Taylor

Diana in Search of Herself
Sally Bedell Smith

Lazy B
Sandra Day O’Connor and H. Alan Day
Back to Top