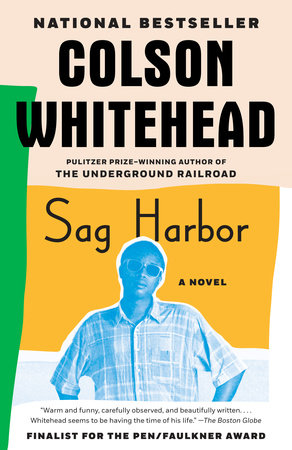 The questions, discussion topics, and reading list that follow are intended to enhance your reading group’s discussion of Sag Harbor, a tender, hilarious, and supremely original novel about coming-of-age in the ’80s.

The year is 1985. Benji Cooper is one of the only black students at an elite prep school in Manhattan. He spends his falls and winters going to roller-disco bar mitzvahs, playing too much Dungeons and Dragons, and trying to catch glimpses of nudity on late-night cable TV. After a tragic mishap on his first day of high school—when Benji reveals his deep enthusiasm for the horror movie magazine Fangoria—his social doom is sealed for the next four years.

But every summer, Benji escapes to the Hamptons, to Sag Harbor, where a small community of African American professionals have built a world of their own. Because their parents come out only on weekends, he and his friends are left to their own devices for three glorious months. And although he’s just as confused about this all-black refuge as he is about the white world he negotiates the rest of the year, he thinks that maybe this summer things will be different. If all goes according to plan, that is.

There will be trials and tribulations, of course. There will be complicated new handshakes to fumble through, and state-of-the-art profanity to master. He will be tested by contests big and small, by his misshapen haircut (which seems to have a will of its own), by the New Coke Tragedy of ’85, and by his secret Lite FM addiction. But maybe, with a little luck, things will turn out better this summer.

In this deeply affectionate and fiercely funny coming-of-age novel, Whitehead—using the perpetual mortification of teenage existence and the desperate quest for reinvention—lithely probes the elusive nature of identity, both personal and communal.

1. How does each of Benji’s comrades (Reggie, NP, Randy, Bobby, Marcus, Clive) contribute to the group? What challenges do they face as friends?

2. Explain the differences between Benji’s age group and that of his sister. During these years, why is the disparity between high school and college so acute?

3. Benji comments that “the rock” on the beach near his beach house serves as a racial barrier. White people won’t walk much further past it. What similar examples can you think of that exist today or in your own community? How have racial barriers changed in the last twenty years? How are they still the same?

5. Benji grapples with his identity throughout the novel. At one point he states: “According to the world we were the definition of a paradox: black boys with beach houses. A paradox to the outside, but it never occurred to us that there was anything strange about it” (Pg. 71).

How is this community a paradox? How is Benji’s identity shaped by the two worlds he inhabits, both during the school year, and then during the summer season?

6. Benji often refers to the handshake, song, and/or dance he will surely conquer by the “end” of the summer. To what degree is he constantly trying to reinvent himself?

7. What do you think are the characteristics of a typical 1980s adolescent? How does Benji fit the stereotype? How is he different?

8. Benji clearly realizes toward the end of the summer that what he loves, is perhaps not the girls he pines after, but his beach home and “what he put into it.” He reflects back on a tender moment with his family and the fond memories of being a child. What is it about our childhoods that evoke such special memories within us? Is there a place from your own past that touched your life as Sag Harbor touched Benji?

9. Throughout the novel there looms a hint of darkness behind the relationship between Benji’s father and his family. His father seems to have a violent strain. How does this affect Benji and his family? What is the role of the father in a young man’s coming-of-age?

10. From Catcher in the Rye to Stand by Me, the coming-of-age novel is a perennial in American literature. What do you think is so appealing and universal about this genre?

What the Fireflies Knew

Weather
Back to Top