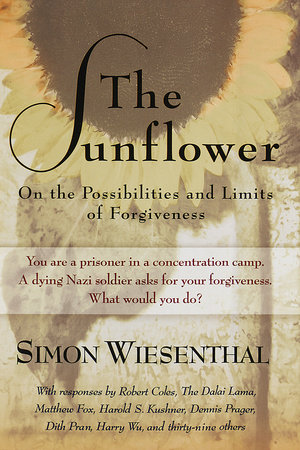 Put yourself in the position of a prisoner in a concentration camp. A dying Nazi soldier asks for your forgiveness. What would you do? In The Sunflower, Simon Wiesenthal raises that question for readers to wrestle with, and they have been passionately doing so ever since.

As a young man imprisoned in a Nazi concentration camp, Wiesenthal was taken one day from his labor brigade to a hospital at the request of Karl, a mortally wounded Nazi soldier. Tormented by the crimes in which he had participated, including the murder of a family with a small child, the SS man wanted to confess to–and if possible, receive absolution from–a Jew. Wiesenthal, left the room in silence, but remained intrigued by the issues the man’s request raised about the limits and possibilities of forgiveness. Must we, can we, forgive the repentant criminal, no matter how heinous the crime? Can we forgive crimes committed against others? What do we owe the victims? Twenty-five years after the Holocaust, Wiesenthal asked leading intellectuals what they would have done in his place. Collected into one volume, their responses became one of the most enduring documents of Holocaust literature and a touchstone of interfaith dialogue. This new edition of The Sunflower, issued in honor of the twentieth anniversary of it’s publication in the United States, brings together the voices of a new generation of thinkers, including Robert Coles, Matthew Fox, Arthur Hertzberg, Harold Kushner, Dith Pran, the Dalai Lama, Dennis Prager, Tzvetan Todorov, and Harry Wu. Their answers reflect the teachings of their diverse beliefs, and remind us that Wiesenthal’s question is not limited only to events of the past.

1. "In his confession there was true repentance," writes Wiesenthal (p. 53). Not all of the commentators agree with him. Many of them think Karl was angling for "cheap grace," and that his remorse exists only because he finds himself facing death. Which point of view do you agree with? Do you think, with literary critic Tzvetan Todorov (p. 251), that the very fact of Karl’s expressing remorse makes him exceptional, and therefore deserving of respect?

2. Eva Fleischner found that almost without exception, her Christian students "come out in favor of forgiveness, while the Jewish students feel that Simon did the right thing by not granting the dying man’s wish" (p. 139). Do you feel that the Christian and Jewish writers in this volume are similarly divided? Do their differences stem from first-hand experience, or from different notions of sin and repentance, as Dennis Prager suggests? Do any writers in this book seriously suggest forgiveness??and why? Do you believe, with political theorist Herbert Marcuse, that "the easy forgiving of such crimes perpetuates the very evil it wants to alleviate" (p. 198)?

3. Did the mother of the SS man, by her passivity, acquiesce in her son’s crimes? Wiesenthal says that people who wanted "only peace and quiet" were "the mounting blocks by which the criminals climbed to power and kept it" (p. 91). Most of the authors in this volume believe that Wiesenthal did the right thing in not telling her about her son’s crimes. Psychotherapist Andre Stein, however, disagrees, saying that "Simon had a responsibility toward past and future victims to tell her the truth. And Karl’s mother had the responsibility of rising above her personal pain and telling the world what her son had done" (p. 240). Which point of view do you agree with?

4. "I asked myself if it was only the Nazis who had persecuted us. Was it not just as wicked for people to look on quietly and without protest at human beings enduring such shocking humiliation?" (p. 57). Some of the commentators believe that those who were following orders were just as guilty as those who gave them; others, like Dith Pran, draw a moral line between followers and leaders. Would you hold them equally responsible?

5. "Without forgetting there can be no forgiving," says retired Israeli Supreme Court Justice Moshe Bejski (p. 116); the Dalai Lama, on the other hand, believes that one must forgive but not necessarily forget. Do you think it is possible to forgive and not forget? How would you differentiate forgiveness and reconciliation?

6. Wiesenthal’s friend Josek tells him that no one can offer forgiveness on behalf of another victim. Rabbi Abraham Joshua Heschel writes, "No one can forgive crimes committed against other people" (p. 165). Wiesenthal is not so sure. "Aren’t we a single community with the same destiny, and one must answer for the other?" he asks (p. 65). It is a question echoed by the Catholic writer Christopher Hollis when he posits that insofar as Karl’s crime was part of "a general campaign of genocide, the author was as much a victim–or likely to be soon a victim–of that campaign as was the child, and, being a sufferer, had therefore the right to forgive" (p. 169). Which point of view do you find more persuasive, Hollis’s or Heschel’s?

7. Many of the Symposium contributors believe that even as he lay dying, Karl saw the Jews as objects or subhumans, and that his wish to confess to a Jew, any Jew, and a concentration camp prisoner at that, showed that he had learned nothing from his experiences. Do you agree with this?

10. Eugene J. Fisher believes that "we have no right to put Jewish survivors in the impossible moral position of offering forgiveness, implicitly, in the name of the six million. Placing a Jew in this anguished position further victimizes him or her. This, in my reading, was the final sin of the dying Nazi" (pp. 132-33). Literature professor Lawrence L. Langer and writer Primo Levi share this opinion. Do you agree?

11. Jean Amery, Mark Goulden and Cynthia Ozick insist that Karl and the other Nazis should never under any circumstances be forgiven. Do you find their arguments harsh or just?

12. Theologian Robert McAfee Brown acknowledges that "perhaps there are situations where sacrificial love, with forgiveness at the heart of it, can make a difference, and can even empower" (pp. 122-123). He cites Nelson Mandela and Tomas Borge as examples of men who have forgiven wrongs that many might see as unforgivable. Do you think that Mandela’s and Borge’s situations are comparable with Wiesenthal’s? Where do the differences lie?

13. If you believe that Karl should be forgiven, apply Harry James Cargas’s reductio ad absurdum (p. 125): If Hitler had repented, should he be forgiven? Why or why not?

15. How does collective guilt differ from national guilt? Do you believe that future generations should continue to feel remorse for a previous generation’s crimes? Martin E. Marty compares the national guilt visited upon the postwar generation in Germany with our own national guilt for the institution of slavery and the genocide of Native Americans, and questions whether the perpetuation of such feelings is healthy. Do you agree with his position?

16. What do you think of President Reagan’s visit to the SS cemetery in Bitberg, Germany? Has reading this book changed your opinions?

17. "I wonder if Simon did not receive his vocation from this dying SS man," writes Episcopal priest Matthew Fox (p. 146). Does this seem a reasonable theory to you? Do you agree with Fox’s belief that in hunting down former Nazis, Wiesenthal is actually offering them the opportunity for a moral conversion?

18. Does Simon Wiesenthal’s life’s work as a Nazi hunter constitute his own response to the question he poses in this book?

Simon Wiesenthal was born in 1908 in Buczacz, Galicia, then part of the Austro-Hungarian Empire. A recent graduate of the Czech Technical University in Prague and the Polytechnic Institute in Lvov, he had just begun to work in an architectural office in Lvov when Poland was invaded by the Nazis. From 1941 to 1945, Mr. Wiesenthal was a prisoner in several ghettos and concentration camps, including Buchenwald and Mauthausen. By the war’s end, he and his wife had lost eighty-nine family members to the Nazi murderers. After the war, Mr. Wiesenthal joined the American Commission for War Crimes and was later transferred to the O.S.S. at Linz. In 1946, with thirty other concentration camp survivors, he founded the Jewish Historical Documentation Center, which functioned in the American Zone until 1954, and reopened in Vienna in 1961. Its task is to identify and locate Nazi war criminals. The center’s work was instrumental in bringing over 1,100 Nazi criminals to justice. Mr. Wiesenthal has been honored with numerous awards for his work, including "Commander of the Order of Orange" in the Netherlands, "Commendatore della Repubblica" in Italy, a gold medal for humanitarian work by the United States Congress, the Jerusalem Medal in Israel, and sixteen honorary doctorates. The Simon Wiesenthal Center in Los Angeles, with branches in New York, Miami, Toronto, and abroad, is named in his honor. Among his best-known books are The Murderers Among Us; Justice, Not Vengeance; Sails of Hope; and Every Day Remembrance Day, all of which have been translated into many languages.

Jean Amery, At the Mind’s Limits: Contemplations by a Survivor on Auschwitz and Its Realities; James Henry Cargas, A Christian Response to the Holocaust, Reflections of a Post-Auschwitz Christian; Eva Fleischner, Auschwitz: Beginning a New Era?; Daniel Jonah Goldhagen, Hitler’s Willing Executioners; Thomas Keneally, Schindler’s Ark; Hans Habe, The Mission; Harold S. Kushner, How Good Do We Have to Be?; Lawrence L. Langer, Admitting the Holocaust: Collected Essays; Primo Levi, Survival in Auschwitz, The Reawakening; Deborah E. Lipstadt, Denying the Holocaust: The Growing Assault on Truth and Memory; Friedrich Nietzsche, Beyond Good and Evil; Albert Speer, Spandau: The Secret Diaries; William Styron, Sophie’s Choice; Tzvetan Todorov, Facing the Extreme: Moral Life in the Concentration Camps; Elie Wiesel, All Rivers Run to the Sea, The Forgotten; Binjamin Wilkomirski, Fragments: Memories of a Wartime Childhood.
Available from HBO Home Video: The Murderers Among Us, starring Ben Kingsley. A dramatized biography of Simon Wiesenthal, including a segment portraying Wiesenthal’s story from The Sunflower.
Learn More About The Sunflower
print

Filled with Fire and Light

Reading Lolita in Tehran
Back to Top