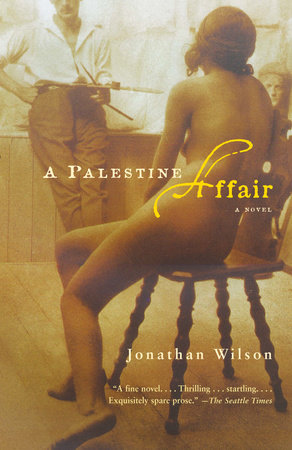 The introduction, discussion questions, and author biography that follow are designed to enhance your group’s reading of Jonathan Wilson’s A Palestine Affair, a dramatic novel of passion and politics in British-ruled Palestine of the 1920s.

When Mark Bloomberg, a disillusioned London painter, arrives in Palestine, he and his American wife Joyce accidentally witness the murder of a prominent Orthodox Jew in their garden. Joyce, an ardent Zionist, is drawn into an affair with the British policeman investigating the case, while Bloomberg, transfixed by the desert light and turquoise skies, begins to grasp the complex truths of the region. The characters, all of whom have come to Palestine to escape the grief of the First World War, are forced to confront their principles and their hearts in the context of a culture in the throes of a painful emergence. A Palestine Affair tells a powerful story in which love proves to be as strong a force as politics.

1. A Palestine Affair opens with an exposition of a marriage falling apart. “He couldn’t love her anymore, though he wished that he could” [p. 3]. The novel ends with the confirmation of another relationship ripe with pregnancy. It also opens with a murder and ends with a death. Why does the author commence and conclude his novel this way?

2. Why does each character come to Jerusalem? Compare the various characters’ memories of London with the Jerusalem in front of them—the colors, the smells, the tastes. Does Jerusalem release them from the alienation and loneliness many of them experienced in London? Why do none of the main characters stay in Jerusalem?

3. Geography and landscape are crucial elements in the novel. How do the different groups respond and relate to the environment? What is Bloomberg’s relationship with the land, as he tries to capture the subtle tones and moods of the landscape? What is the importance of each place and its role in the novel? What are the symbolic differences between the Old City, the Transjordan desert, the port of Haifa, and the pioneer settlement where Rosa works? What significance do the landscapes hold for the story and the characters? What does the desert represent? What binds Bloomberg and Saud in the desert?

4. What is the role of women in the novel? Joyce and Mayan are the only fully developed female characters in this novel, apart from absent, idealized mothers. Compare and contrast these two women. Is Joyce “a chameleon”? How are their relationships with men in general, and with Kirsch in particular, different?

5. Why is Joyce attracted to Kirsch? How is he alike or different from her husband? How are the relationships different? What binds Joyce to Kirsch? And to Bloomberg? Do the events of the novel change, or shift, these ties?

7. Obsession with mothers is universal in this novel. Kirsch reflects on his mother often, especially when he is hospitalized. Bloomberg painted portraits of his mother when he met Joyce and is haunted by her after her death. “A man Bloomberg’s age shouldn’t be so damaged by the death of his mother. But he was” [p. 3]. And on parting, Saud asks Bloomberg to visit the Arab neighborhood and convey love to his mother. Why does the author concentrate on these relationships? Why are the men pining for their mothers? What is the author saying about these men and filial love?

8. One cannot place a novel in Jerusalem without tackling the massive and pervasive subject of religion. What is the role of religion in the novel? How does religion define each character and affect the way they interact with each other? What is significant about each character’s Jewishness? What are the different groups of Jews in A Palestine Affair?

9. What forms of prejudice and racism are present in the novel? Are they subtle or blatant? How are they manifested? What is the author saying about religious hatred? About anti-Semitism? About Jews against Jews? From where do the conflicts between the Zionists and the Orthodox Jews stem?

10. What is the relationship between the different communities? Are these tenuous or sturdy ties? Is any group represented in A Palestine Affair more sympathetically or more innocently portrayed than another? Is there a hierarchy based on race, religion, class, gender, and/or nationality? How is the hierarchy established? Who really wields power?

11. What statements does the novel make about the British empire as it was on the cusp of dissolving? There is much lawlessness in the novel despite the British façade of orderliness and civility. Ross believes it is the “sacred mission” of the British to “maintain the illusion that we are in control. An illusion that rests as much upon our well-deserved reputation for fairness as anything else” [pp. 72–73]. Yet to many of the British in Palestine, “Zionism and Arab pan-nationalism meant about as much to them as last year’s snow” [p. 48]. What are the moral strengths and weaknesses of the declining empire as portrayed in A Palestine Affair?

12. What is the significance of letters—handwritten, posted onto doors, sent, unsent, crumpled up, inscriptions in books, declarations of love, formal, informal—in A Palestine Affair?

13. Discuss the theme of betrayal in A Palestine Affair. What types of betrayal occur over the course of the novel? Why does Kirsch betray Mayan by not introducing her to her parents’ friends? Whom has Joyce betrayed? Is she betraying someone or something by not releasing Frumkin’s name? Is silence a betrayal? Does Bloomberg betray Joyce by ceasing to love her and traveling to the desert alone? Does Kirsch betray the system and himself by letting Saud escape? Does Ross betray the British empire by ignoring the accelerating “tinderbox” situation?

14. Discuss the style, structure, and descriptions of A Palestine Affair. Is it painterly, cinematic? Why does the author start almost every chapter with a character’s name? Is there a relationship between the structure of the novel, the order in which Wilson relates the plot, and the number of chapters in the novel?

15. How have your knowledge and opinions on the current Israel/Palestine conflict been confirmed or challenged by reading A Palestine Affair?

Jonathan Wilson was born in London in 1950 and educated at Oxford and the Hebrew University of Jerusalem. He has lived in the United States since 1976, with a four-year interlude in Jerusalem. The author of the novel The Hiding Room and a collection of short stories, and currently the chair of the English Department at Tufts University, he lives with his wife and two children in Newton, Massachusetts.
Learn More About A Palestine Affair
print

Sweeter Than All The World
Rudy Wiebe

A Curse on Dostoevsky
Atiq Rahimi

Until the Dawn’s Light
Aharon Appelfeld

They Burn the Thistles
Yashar Kemal

Beyond The Aegean
Elia Kazan

The Angel of Galilea
Laura Restrepo