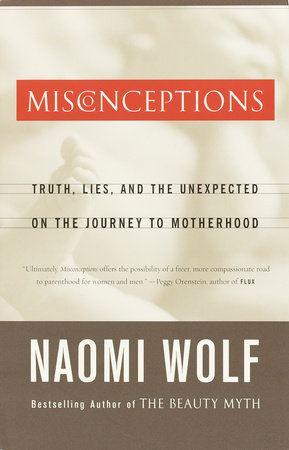 Bestselling author of The Beauty Myth

"Ultimately, Misconceptions offers the possibility of a freer, more compassionate road to parenthood for women and men." —Peggy Orenstein, author of Flux

The introduction, discussion questions, and author biography that follow are intended to enhance your group’s discussion of Misconceptions, Naomi Wolf’s demystifying take on motherhood and childbirth.

In The Beauty Myth the fearless Naomi Wolf revolutionized the way we think about beauty. In Misconceptions, she demythologizes motherhood and reveals the dangers of common assumptions about childbirth. With uncompromising honesty she describes how hormones eroded her sense of independence, ultrasounds tested her commitment to abortion rights, and the keepers of the OB/GYN establishment lacked compassion. The weeks after her first daughter’s birth taught her how society, employers, and even husbands can manipulate new mothers. She had bewildering post partum depression, but learned that a surprisingly high.percentage of women experience it.

Wolf’s courageous willingness to talk about the unexpected difficulties of childbirth will help every woman become a more knowledgeable planner of her pregnancy and better prepare her for the challenges of balancing a career, freedom, and a growing family. Invaluable in its advice to parents, Misconceptions speaks to anyone connected—personally, medically, or professionally—to a new mother.

1. Our nation has the highest postpartum depression rate in the developed world. Some people might argue that the rate is a direct result of our equally high rate of C-sections, while others might wonder if the rate stems from better reporting, or from doctors being more willing to make the diagnosis. On the other hand, many doctors are perhaps too willing to lump postpartum symptoms, whatever their cause or most appropriate treatment, under one convenient (and conveniently dismissable) umbrella. Discuss this and other instances you might know about, examining how a diagnosis of postpartum depression, or the condition itself, affected you or people you know. Why do you suppose the incidence is so high in this country, and so much lower in others?

2. “It was one thing to experience a loss of self in a prefeminist culture that at least assigned a positive status to motherhood… it is very different to lose a part of one’s very sense of self to motherhood in a world that often seems to have little time, patience, or appreciation for motherhood.” (page 8) Discuss this assertion in light of Wolf’s claim that motherhood has been sentimentalized in our culture. Explore the ways in which a charming, rosy picture of pregnancy and parenthood might trivialize this challenging experience. End your discussion with a quick look at maternity clothes.

3. Wolf writes touchingly and persuasively of the loss of self experienced by women who bear children. Considering that the notion of “self” is itself culturally flexible, try to define “self” as Wolf might define it, and take a look at how the author’s own definition of the term shifted over the course of her pregnancy and new motherhood.

4. Part of what makes this book so worthwhile is the author’s keen insight into aspects of her readers’ lives, aspects that readers themselves might overlook or take for granted. One such insight has to do with the “fatalism” Wolf felt upon purchasing a pregnancy test, fatalism being “something that people in my cohort scarcely ever feel–a sense of events moving beyond one’s control.” (page 15) While some readers might be of similar cohort, others might be more accustomed to the spin of the unexpected, the unalterable press of forces outside their control. Describe what you feel must mark the biggest difference between the two sets of people. What is it that most assures that one person’s life might be free of fatalism while another person’s life seems to depend on it?

5. Discuss the “will and longing” that Wolf feels played a role in her conception
while on birth control, and on the conceptions of other women, many hitherto infertile, whose stories are included in this book. (page 16) Would you be more inclined to ascribe such events to the “dark,” “medieval” undertow marking Wolf’s appreciation for the mysterious aspects of our being, or to physiological, scientific phenomena not yet entirely understood? Clearly, Wolf herself entertains both views, holding the light of folklore to the light of the scientific, and vice versa. Where do you stand? How do you choose to make sense of the things that spook you?

6. Describing the “absent-faced, white-coated” staff in the “bowels” of the “vast, squat” facility where she went for her sonogram, Wolf indulges any writer’s instinct to select a vocabulary that will advance her messages and themes (for starters, decode the “blond concoction” worn by the technician.) (page 27) Now find other passages in MISCONCEPTIONS where such skills are most apparent, and take a minute to assess the influence on you.

7. “Something irrational happened,” Wolf writes, “a lifetime’s orientation toward maternal…over fetal rights lurched out of kilter.” (page 28) Discuss the several shifts in her political thinking that accompanied Wolf’s pregnancy, and describe similar shifts that may have accompanied yours if you have ever been pregnant. Do you consider such shifts to constitute a loss of self? Why? Why not?

8. Wolf is one of our most articulate and philosophical thinkers on issues concerning women. Yet not until she herself was pregnant did she begin to feel that it was “brutal to be content with a feminism that was content to fit into [a] traditionally masculine definition of accomplishment.” And as she readily attests, only then did she realize that “true revolution would come about only when we demanded that the world conform to our needs as women.” (page 121) What does this tell us about the prospects for the child care system in America?

9. Pregnancy, birth, motherhood–not only are such topics lightning rods of controversy and debate, but they are conceived of differently by members of various cultures. What’s more, an individual is likely to have conflicting, sometimes contradictory feelings about these subjects at various times in her or his life. Therefore it is to be expected that any book or work of art about pregnancy and motherhood might contain ambiguities, placing one sentiment in unlikely juxtaposition with another, or entertaining what might look like mutually exclusive ideas. Do you find such ambiguities at play in Misconceptions? If so, did they increase or decrease the author’s credibility? In what way do they serve the integrity of her work?

10. Test your memory of the facts and theories presented in Misconceptions:
-Name two labor practices that Wolf feels increase the likelihood of a C-section.
-Why do hospitals insist on the use of fetal monitors even when such monitors have been shown to have no conclusive benefit?
-What’s the difference between “arrested labor” in the eyes of a hospital and in those of a midwife?
-Exactly what is an epidural and what does it accomplish?
-Describe a typical hospital labor as it occurs in the U.K.
-What is an episiotomy and why do hospitals encourage them?
-Some C-sections save women’s and babies’ lives, but some are medically unnecessary. What are the risks presented by C-sections?
-According to the proponents of natural childbirth, what causes the pain of childbirth?

11. Even prior to labor, some women actively elect to have C-sections. For what reasons do you imagine a woman might make such a decision?

12. In Wolf’s estimation many forces, chief among them the medical establishment, the insurance industry, and the legal industry, unite in urging women to go through labor quickly and “efficiently.” What are some of the other institutions that you feel exercise significant influence, undue or otherwise, on women in labor?

13. American doctors have “medicalized” normal delivery processes while labor classes have prepared women for what hospitals promote as “routine intervention,” Wolf convincingly observes. Might it be said that American medicine treats death in a similar fashion, applying uncalled-for technology to that phase of our lives as well? Have we been conditioned to expect “routine intervention” whenever we find ourselves in a hospital? How does this differ from what you know of medical practices in other cultures?

14. “Most birthing and postnatal care settings…leave out the womanliness in the woman.” (page 196) Discuss.

15. Wolf’s insight into the inadequacies of most playgrounds is an eye-opener for those of us who take for granted such inadequacies without bothering to question or challenge them. What should the ideal playground include? Now imagine a gift shop for babies and new mothers stocked by Naomi Wolf. List some of the merchandise, keeping in mind the quote from above.

16. How do you suppose your grandmother would react to this book?

17. How might things be different if men were the ones to bear children?

18. After she and her husband became parents, “a shocking gentleness engulfed us,” Wolf writes, describing how it felt to become a member of the cult of unconditional love. (page 142) Note that gentleness is not often called “shocking,” nor is it considered to “engulf.” Wolf’s use of phrases like these helps us all to understand the nature of a feeling that might otherwise go unnamed. Discuss the “shocking gentleness” of parenthood as you know it.

Naomi Wolf is the author of the best-selling The Beauty Myth, which helped to launch a new wave of feminism in the early 1990s and was named one of the most significant books of the twentieth century by The New York Times. More recently she has authored Fire with Fire and Promiscuities. She lives in New York City with her family.
Learn More About Misconceptions
print

Wisdom of Our Fathers

The Marriage-Go-Round
Back to Top